Old Gal, Old Violin and 57 Years since I have played!

Old Gal, Old Violin and 57 Years since I have played!
An inherited Stradivarius "copy" made in Austria and a player who has not played since 1960! Needing Help Already!

@Cearbhael, I hadn't watched those videos yet myself. Apparently, it's a LOT more involved than the couple of descriptions I'd read. Thanks for the warning!

I'm lucky, the shop I go to for my lessons has a luthier, and for that matter my teacher can be a luthier when he can find the time, and there's another shop a couple of miles from them. So I'm in pretty good shape for luthier work. (They're not cheap, by a long shot, but they do good work.)

@Charles Wish I had luthiers coming out of the woodwork! Sigh, I fear I only know of one and he is in the Twin Cities and rather exclusive...(and probably pretty unavailable) From my understanding, he works with concert violinists and would probably not want to work on an old fiddlers bow. His violins are outlandishly expensive and custom made. I don't think I would feel comfortable even asking him to rehair my bow, since I distinctly think that my instrument and bow are beneath his skills! So, I am hoping I can get the luthiers at the Fiddlershop to do it! I am amazed the Fiddlerman is so down to earth and willing to help we small folk, that are struggling along with what we have! He has so much patience and empathy for even the most crass beginner! I wonder if he realises what a gift that is! I am so totally comfortable asking for help here and I can't say I am normally that comfortable around musicians that are as accomplished as he is! I tend to the shy side, so it is wonderful to have a place like this to come for help and guidance! What is most amazing to me is the fact that the violin tutorials are FREE! Usually, the free is limited and followed with a pitch to sign up for lessons that are pricey! Not here! I have yet to see a pitch that is trying to part you with you're money! The lessons are truly free and truly helpful! Even his luthiers are out there making informative informational videos! It makes the Fiddlershop very transparent and friendly, I find myself trusting that they truly are willing to help you no matter what! That also makes me a firmly loyal customer as well! All my violin needs will be filled at their shop and no where else! They have earned that trust many times over!

Cearbhael said
..............@Fiddlerman I still need to know if the Fiddlershop luthiers can rehair my bow and what that service costs! Please let me know since I am serious about getting this done!

We can definitely re-hair your bow and make any repairs you like. I'm by chance going on vacation tomorrow for the next three days but please call the shop at 9545305999 to arrange it. Do you still have the PVC or box that your other bow came in?

If so, we can set up the label for you so that you can save a bit on that as well.

As far as other repairs on the bow, you can get more detailed information after we receive it. I believe that pro hair (our best hair) re-hair is normally $75. I don't think saving money on the hair is the way to go on an old Pernambuco bow.

@Fiddlerman Thanks Very Much for the quote! I don't have the box the new bow came in! It was not holding up well, so I made the decision to trash it! I will pick up a PVC section from the Lumber supply down the road! I am sure it doesn't cost much! Also, I don't intend to scrimp on the hair so will be saving my pennys. May take me a couple of months or so. Meanwhile I will be struggling with that heavyweight bow! Haa Haa, I probably would have been happily ignorant that there was better out there if I had not picked up that old bow! It is so Markedly lighter and sooo much more comfortable in my hand, that I now can't enjoy using the new bow even though I am sure it is adequate for my crassly beginner lessons. I am getting a good hour of bowing lessons on open strings. My book starts with the middle bow then goes to upper bow and lower bow. Then it mixes up the strings on whole bow and tosses in bowing E and A together and D and G together. There is one more extra exercise for open string, but it gets even more complicated, so not adding it until I get more control over my bow! I regret letting my mother talk the violin teacher into allowing me to play left handed violin! He really insisted I could learn to play right handed and all concert violin bows have to go the same direction...Now I am having to train that right hand! I am not worried about the left hand! I played right handed guitar for a few years! Fingering will be pretty easy.

Sounds like a plan. When the time comes, give us a call and ask to talk to me about the price 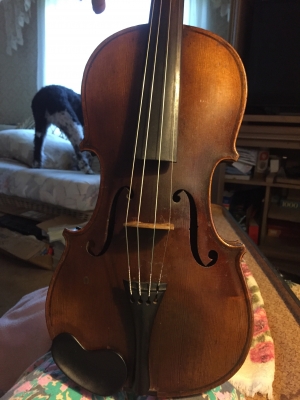 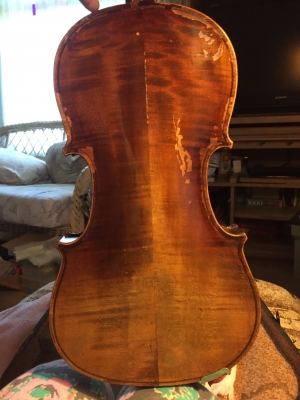 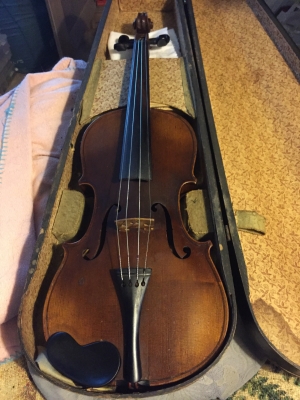 Well, I have been thinking and considering how dinged up the finish is on my old violin, I decided to try a high quality scratch finish on it! It was scary but as I worked it in, it was obvious it wasn't changing the colour of the finish but it certainly was making the scratches less noticeable and the old finish brightened up and came alive!! It still has the same dings and scratches but in my eyes it looks gorgeous! I took a couple of pics and ask that you look past the dings and look at the old finish.  Also ignore the Poodle behind and the love seat he was joyfully taking apart (LOL) I personally like what the way they chose to finish it! One question, why would it be so terrible to use Goddards antique polish which is beeswax and lemon oil. It is good enough for museums on wood objects, so why not on an old violin? Wouldn't it be good for the violin's wood and if not why not? Curious minds want to know! Oh and yes, that is the badly dinged up and totally unpadded original wood case! Exception being the felt pads on both sides of the violin where the body narrows (don't know the word for it is, but sort of like a waist?) and the felt under the violin body. I am going to pad it where padding is needed and fit it with new hinges, clasps, and a lock. The hardware is so damaged it really doesn't properly close! Only one clasp works and very loosely. I used to tie it shut but since I use it daily that no longer works. I have a spot where it wedges in and is safe. Other than that, it is obviously a hand made case of unknown but very light weight wood, and it has a shaped dome lid. I also have to put in bow holders. What still exists is useless. I have the bows hanging in the open on my wall by my Psalter. Thinking cloth tabs with Velcro closures should work. 4 of them with 2 on each side of the case lid. One to support the frog end of the bow and one to support the bow tip. The bow literally just fits within the case lid, end to end! I also want to have a built in cover for the violin so the bows won't scratch it. Anyone have any other suggestions?

I suppose it may seem silly to fix up the old thing but it is entirely possible that my grandfather or Great Grandfather built that case. Their family were wheelwrights and carriagewrights, in Germany before they came to America, so they were good woodworkers though poor!, so yes, lots of sentimental value. It would explain the cheap hardware (pinching pennies) probably all they could afford. Come to think of it, my Grandmother never did have a case for her Mandolin! Her family immigrated to the US from Canada, their Ancesters left England and Ireland and were pioneer settlers in Canada back in the 1780s. Descended from a daughter of landed gentry and the coachman she eloped with (Yes she was disowned), Being a poor farmer in a new country was a real eye opener for her! I would say she had regrets! Any way, my Grandmother's Mandolin always was just hung on a wall or when in storage, wrapped in a blanket. Immigrants that took up farming in those days were truly poor, so it is a miracle they managed to afford instruments! I am sure though that pushing aside the furniture and playing reels and jigs helped to bring joy into what must have been hard working lives.

Interesting. Good luck restoring her if you do it yourself.
I can't see any harm in using that polish.

@Fiddlerman The case I can DIY, but the fiddle? My sweet Rose needs professional help! Only your luthiers will touch her, as I can afford it! She is too precious to me for me to try amateur hour on her! Unfortunately she has some boo boos, the whittled E peg and a thin crack topside I knew about! Unfortunately her chinrest popped off the other day and exposed a far worse issue! Looks to me the chin rest was on too tight and caused the rib (side) to separate from the top under the chin rest! It is unglued to where the tail of the violin is (the piece of ebony the strap of the tail rest goes over to reach the end pin) Now it is possible that something else caused the seam to pop and my grandfather tightened the chinrest to clamp the opening. Actually it does seal things up fairly tight so that might be the case! However it does explain why my endpin is leaning to the left! Pictures are posted under the topic "Squealing E and A Strings", if you're interested! It may cost me a pretty penny, and I may have to tackle them in order of importance, but only your luthiers will get to touch her. New Varnish? Well that would be nice after all the important stuff is done! Meanwhile I just want to keep her wood healthy!

Nice plan. Good luck with everything!!!