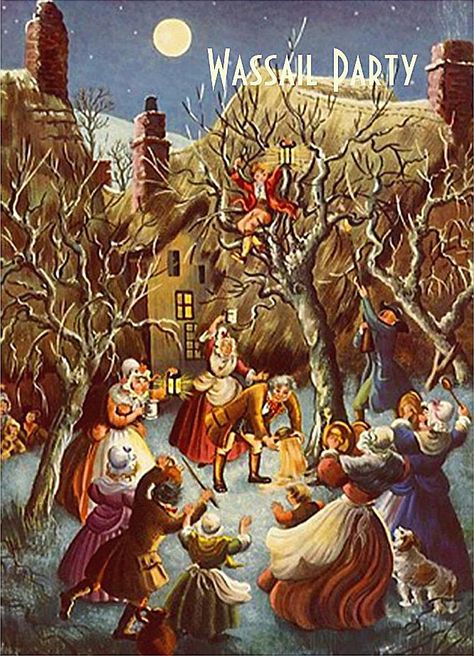 I thought Wassailing was just Caroling, only older terminology!

Come to find out, there's people around the World still taking part in some VERY interesting traditions!

I think the coolest tradition of Wassailing is probably in Southern Wales - 'The Mari Lwyd'.  Seems like a lot of fun!

I guess it's understandable - dark and cold Winters would make people drum up some extra Holiday entertainment, but some older versions of this sounds like a combination of our Halloween & Devil's Night, only it's Christmas & New Year's!

Ever partake in this during the 12 Days of Christmas?

Mummering!  Dressing in costumes for door-to-door festivities of music, singing, dancing, reciting - while hosts guess identities and offer food & drink.  A tradition of Newfoundland, Labrador, Ireland & other parts of the UK.

Do you know much about this?

'Julebukking' is a Scandinavian tradition that seems related to Wassailing.

Between Christmas and New Year's Day, people wearing face masks and costumes (Julebukkers) would go door to door, where neighbors receiving them attempt to identify who is under the disguise. In one version of Julebukking, people go from door to door singing Christmas songs. After they have sung, they are usually awarded with candy. Another tradition requires that at least one person from the visited household join the band of Julebukkers and continue to the next household. (Wikipedia)

You might have to help me out here! (lol)  Any music and singing involved?

Scotland and Northern England (Greece & the Country of Georgia, Viet Nam & also others) might have a tradition related to Wassailing, called 'First-Foot'.

Craig Duncan Plays "Gloucestershire Wassail" and "Wassail, Wassail, All over the Town"!

wassailing wouldnt really go down well were I live, I know about it though, but I know of nowhere in the uk were this goes on. At one time wassailers would get quite violent if refused drink, I am not sure but I think it actually got banned for a time. I have seen some good mummers, mainly morrismen.

There is also another tradition which yaou probably wont haveheard of, I in any case have never seen it on the web, though it may well bethere, it was called pace egging, I saw some medieavel re enacting musicians at little morton hall once, the hall was built about 1450 or so its half timbered and they often have events there. Anywaythe musicians explained the idea behind the practice were they would go from door to door and get money or drink, here was a song they did which went with the,practice, cant remember allthe words but some of them were ,

Interesting about the 'pace egging'.

There used to be a lot of Carolers out around Christmas when I was growing up.  I'd go out, too.  It would be a special treat if we were offered a cookie, Spiced Cider or Hot Cocoa.

I don't know what happened, but after I got out of the Military no one was doing it anymore. 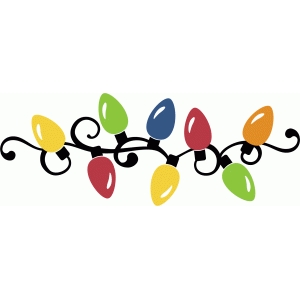 It's a shame, because I think the practice of singing for others spreads the joy of a festive Season - regardless of what someone's religious beliefs are.

I would certainly welcome it again.

I found a link about the pace egging, apparently it was easter time,

Lancashire was originally the county were I lived but became part of the new county merseyside, which a lot of people were upset about, and still are to this day.

The part were I live, was originally occupied by the Celtic tribe the brigantes, which was around two thousand years ago, after that it was saxon, and viking, lots of the place names in this area are viking, like thingwall, in liverpool, and ormskirk, near skelmersdale , which is also a viking name, there are also saxon, right near me we have Laffak which  eans meeting place at the holy oak which is Saxon, my own name on the English side of the family is of saxon descent, the name on the irish side of my family is obviously Celtic, as is my missus name, she is also half Irish. The entire area of Lancashire is steeped in tradition and ancient history.

"First-Footing" was certainly common in years gone by when we all made our own entertainment to welcome in the New Year.  It was always traditional to go around the houses on New Year's Eve, with a present of a lump of coal for the fire, or a slice of "black-bun".  Of course, there was the mandatory whisky (other alcoholic beverages were available!), the lugging around of a set of bagpipes by one of the group and an occasional fiddle in a case.

Dependent on the welcome given, folks would bide-a-while with the enforced host (well, the householder visited, just couldn't refuse entry LOL), or perhaps just move on to some other house that still had its lights on !

When you encountered a particularly welcoming host, general carousing, singing (a few traditional Scottish songs, with every second one being an increasingly-poor rendition of Auld Lang Syne), attempts at dancing and so on - would then continue well into the wee-small-hours.

As a child, I recall these traditions still being active in the 1950's, and I even partook of such activities in the 60's.   However, with the increasing availability of TV and various televised Hogmanay concerts, First Footing (from the extent is was) has very sadly dropped from favour in comparison to inviting a number of folks round for a wee-get-together and a ceilidh (and watching the accursed televised Hogmanay concerts featuring "celebrities" many of us have never heard of.  Oh - the one exception to that I should add, are the occasional years where they screen excerpts from The Transatlantic Sessions - MUCH more watchable and enjoyable!)

I agree that it's nice and festive to hear Christmas music and people singing. I was a member of the school choir every year...singing in shopping centres and care homes etc. I loved it. My kids school have started a choir this year but both don't think it's fun and haven't joined! I don't think the choir made it anywhere to sing though due to Covid. Even the nativities were recorded rather than parents allowed in to school.

Thinking of traditions though, my daughter was excited and telling everyone she found 'the pickle'.. but they didn't know what she meant. We got a Christmas pickle ornament from the Christmas shop that used to be on the pier in San Francisco a number of years ago but it seems its a lesser known German/American tradition.

This has really been fun learning about all this! 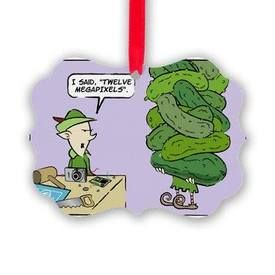 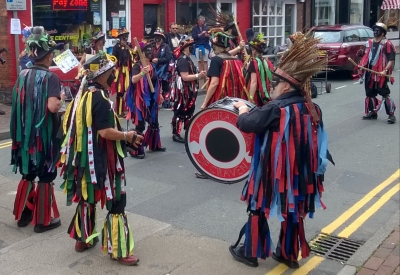 Brilliant Emily, thats the one, and I am pleased I had remembered the tune exactly after all this time. I love old English and Irish music. When they sang this at little morton they were in full old English clothes.

There is a boat and music festival at middlewhich which I go to when its on, which is not often now,with the plague. You would love it, it has canals going through the small town which are full of canal boats selling all kinds of things and there are stages set up in the grounds of all the pubs and on the canal banks, where all kinds of folk, old English and Irish and other forms of music are played, all for free. The place is a hive of morris dancers and mummers who perform all day long. they have dance competitions, and there are lots of buskers.

Hope you get to go to the next one. 😊

I haven't done any wassailing (never lived anywhere that had a tradition of it), but when I was an undergrad the Gloucestershire Wassail became a favorite song as my university's chamber choir always began its holiday concerts with it, singing it while entering from the back of the auditorium and walking down the aisles to the stage.

Separately from that: it appears wassailing came to America and found a footing in the Appalachians for some time. Here's a video that might be of interest, from the baroque orchestra Apollo's Fire. They've devoted a lot of time to exploring the connections between baroque music and various folk traditions, and between being based in Cleveland and having a music director who spent formative years in the Shenandoah Valley, Appalachia is definitely an area of focus. This set of three wassailing songs begins in England and ends in Kentucky. 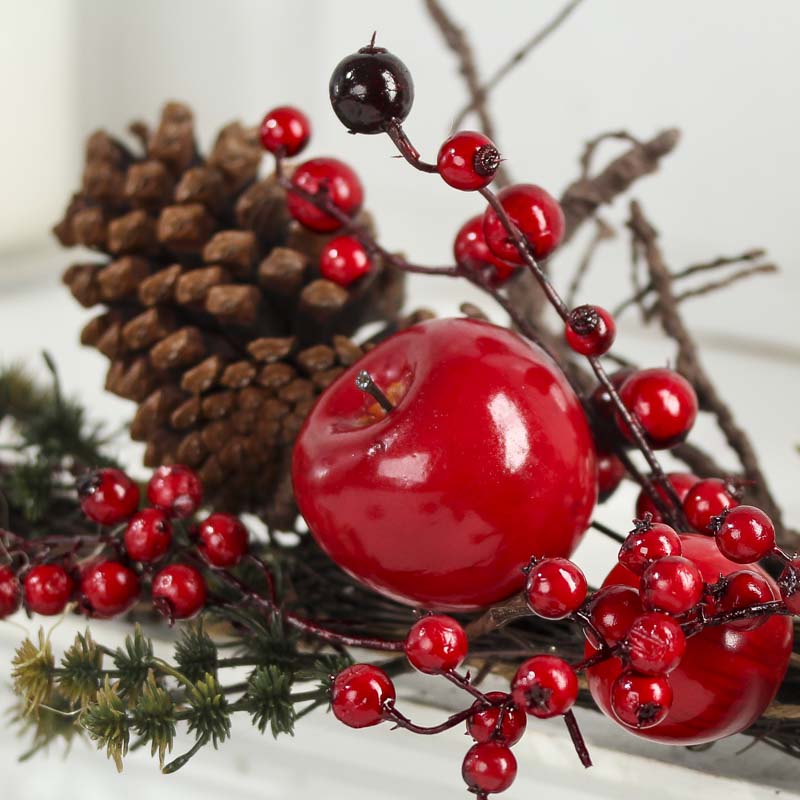 It included "Here We Come A Wassailing", "Sommerset Wassail" and Kentucky Wassail.

I really enjoyed watching it.

I posted an instrumental version of "The Merry Wassail" in the Colonial Christmas Thread, but like you showed, what's important for Wassailing is the lyrics.

The "Apple Tree Wassail", performed by the Watersons.

The "Yorkshire Wassail", by Theatre of Voices.

After reading this on the National Trust UK website:

Wassailing is a Twelfth Night tradition that has been practised in Britain for centuries. It has its roots in a pagan custom of visiting orchards to sing to the trees and spirits in the hope of ensuring a good harvest the following season

I now know what I am doing wrong with my apple and pear tree!  Obviously, I need to go outside and play glorious music and sing.....I'm not sure what the neighbours would think though....but at least I may have a good crop of fruit

The singing in the orchard thing was on lucy worsleys carol programme which I watched last night, they poured cider on the tree roots and then shouted to scare away evil spirits, then off to the pub were they had a sing song and morris dance.