Scales According to FM Site

Scales According to FM Site
How are scales described ?

The FM tutorials contain a topic called "Dorian" scales.
However, the examples given start with the description "D minor dorian" over a few bars of music in the key of C (?) What is the D to C connection?

I've been introducing myself to these scales as well - and I see what you're saying - here's and extract from a wiki page - I'll give the link below - that may help clarify (or even confuse you more ! )

Such scales are called modes. Using the C scale as an example, (remember that each mode uses the notes from the C scale) here are the modes:

An Ionian scale IS the major scale and the Lydian and Mixolydian are closely related and are normally played with major chord progressions. Notice that we have the 1st, the 4th and the 5th for major sounding scales.

The Aolian is the natural minor scale and the Dorian and Phrygian are related and sound best played against minor chord progressions. Notice that the minor sounding scales are the 2nd, 3rd and 6th notes of the scale.

Playing a "modal" chord progression on a guitar or piano for the C scale one would play C, Dm, Em, F, G, Am and normally a Bdim (diminished).

The Locrian mode starting on the 7th note of a scale is, I believe, rarely used.

Thanks Bill. You saved me the explanation

Absolutely, they are almost as common as pieces in major scales: Bach's Concerto in D minor being one example. If you are talking about D Dorian mode songs, again there are plenty, but think of Eleanor Rigby by the Beatles, or Scarborough Fair by Simon and Garfunkel as examples of how of the Dorian mode sounds.

Exactly. Music consists of scales and familiarizing yourself with those patterns will aide you in playing them more fluently and effortlessly.

I am in no way questioning tlhe value of the scale exercises but I am curious about the explanations.
Uzi mentioned ( I think) the Bach Double in D minor which I find is in the key of F (?) That is confusing. How do I arrive at F from D minor ? 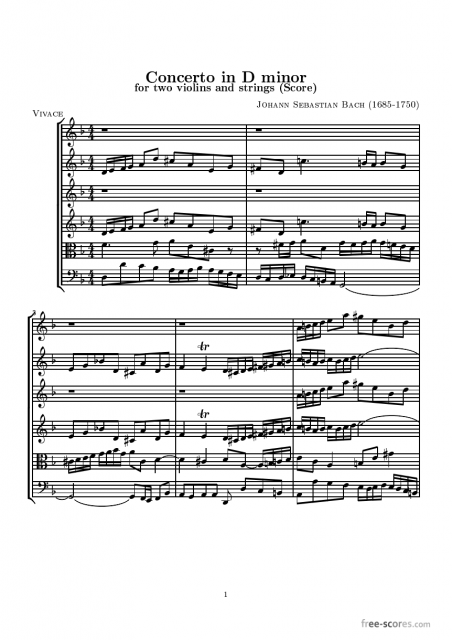 Funny you should ask that, I was just thinking about coming back and explaining that. Above, I said that the Aolian (VI) mode is the same thing as the natural minor and uses the same notes (same key signature) as the major key it's associated with. You'll notice that, in your example, that both the key of F major (the Ionian mode) and D minor have a single flat note: the b-flat. The natural minor (Aolian) shares all of the same notes as the key of F major, but goes from the 6th to the 6th, rather than from the 1st to the 1st. So, F(1st), G(2nd), A(3rd), B-flat(4th), C(5th), D(6th). Thus, the Aolian mode (or natural minor) for the key of F is Dm. G(2nd) would be the Dorian mode for the key of F major and we would say G Dorian and it too has the same key signature (same notes) as F major. For the natural minors one just says D minor, rather than D Aolian although they are the same thing.

Despite the fact that they share the same notes, they sound very different. Just about every blues tune you've ever heard is in a minor scale. The reason that they sound different is due to the location of the half steps. Below, I'll use W to designate a whole step and H to designate a half step. The major scale, can be thought of as two tetrachords joined by a whole step interval. A tetrachord for a major scale is a four note sequence as follows: 1W2W3H4. Now, if we take two tetrachords and join them by a whole step we end up with a major scale which is (stepwise):
W-W-H (W) W-W-H. If we were to start on the 6th instead, then the sequence, using the same notes would be, W-H-W (W) H-W-W. That difference makes the scale have a much different color, or feel.

Assuming the usual musical notation system, the notes available are specified by the key signature. Unless there are accidentals (read: exceptions to the key signature), there are at most seven pitch classes in the piece. http://en.wikipedia.org/wiki/Pitch_class I believe you understand that.

A melody is a jumbled-up scale.

The concepts of mode and scale don't make sense without a concept of tonic.

I have a new respect for scales, etc.

Uzi Ditto on your last post. Light at the end of the tunnel !

A melody is a jumbled-up scale.

LOL, yep that's what my scales sound like, so I'll change my thinking to "I'm working on a new melody" and I'll be off the hook to having it played well.