Sheet music notation
Can anyone tell me what this means?

I'm an absolute beginner as far as music is concerned, but I'm trying to learn to read music. I came across some notation on sheet music that I haven't seen before, and don't understand, though I'm guessing it may have something to do with tempo. Can anyone tell me what the notation circled in red means? 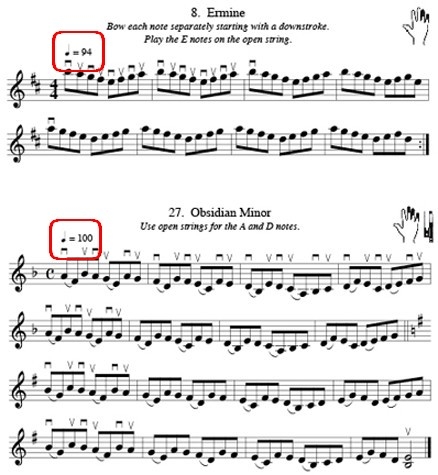 set this to 100 and you'll have the tempo

Thanks for the info!

As the others have said, it represents the tempo.  Don't forget to look at the time signature also.  In the first example, 4/4 is the time signature, which means there are 4 beats per measure (represented by the upper 4) and the quarter note gets one beat (represented by the lower 4). Each of the notes in the first measure of the first example are 1/8 notes so for every two of them there is one beat, counted One-and, Two-and, Three-and, Four-and, which equals 4 beats, but you've played 8 notes.