If You Could Meet Antonio Stradivari

If You Could Meet Antonio Stradivari
Just an exercise in imagination

If the Master Luthier, Antonio Stradivari could come back and you could meet him.  And if he could either speak English or have a translator interpret for him, what would you say to him?

Would you thank him?  Shake his hand?  Tell him your violin/viola/cello/base story?

I am curious what your responses are.  Please feel free to respond.

@Pete_Violin and others, I would spread some ground tea leaves on tuned violin plates and demonstrate the visual mode patterns (see photograph).  I am sure he achieved similar results through the more laborious procedure of plate tapping. 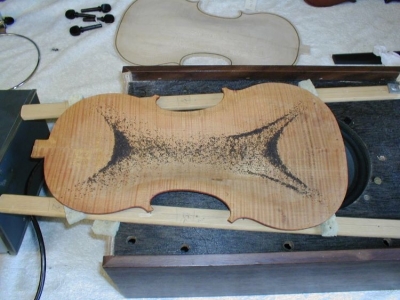 Stradivari constantly tinkered with his designs and measurements throughout his life and not all of his creations were gems.  I think that he (and the composer Bach) would be fascinated with modern technological advancements.  I also seriously doubt that he would stubbornly cling to “the old ways” such as the use of hide glue.

There's no doubt Stradivari was a master craftsman. But I tend to think Joseph Nagyvary's hypothesis (a rather controversial one) about the "secret" of 17th-18th century Cremonese violins being as mundane as the prevailing lumber transportation method at the time is on the right track. Nagyvary's own violins, after all, have been acoustically indistinguishable from Guarneri violins since he started using wood salvaged from the Great Lakes. (Also, I am fortunate to live near a concert hall that uses wood paneling from the same source; the acoustics are easily the best I've heard.)

I suspect Stradivari himself might want to discuss wood sourcing with Nagyvary, and would be fascinated with Fast Fourier Transform analysis.

I don't think I'd be overawed by him, because I'm a violist, and Stradivari violas, while excellent, are generally not considered to be the best in the world; violists tend to find them awkward to play. Their extremely high value is mostly because of their rarity. (He is only known to have made 13 violas, mostly early in his career, and only one during the two decades that are considered his golden period.)

Re: hide glue, I was under the impression that the reason for its use is to allow violins to be easily re-opened. Presumably modern adhesives with similar properties exist?

Hi @AndrewH and others.  Hide glue was the best adhesive available at the time.  I have read that it’s best property is that less force is necessary to break a glue bond than is needed to break the wood.  A glue bond is easier to repair than a wood repair.  A modern adhesive such as the original Titebond shares the property of easy removal at the seams, but makes a stronger joint.  It is often the case where new wood breaks before the glue joint is separated.

One modern luthier advocates the use of Titebond on violin seams by making a wood/newspaper/newspaper/wood composite, which appears to be an ideal solution.