This is a well put together explaination of what is going on in a hit pop song.  Maybe someone else will find interesting here too.  Its talk of things musically that I probably will never use..or even remember, or need playing fiddle...but Im glad i came across it and now have a peek behind the curtain on how its done and why it works..so thank you..  Adam Neely

Check out 12:49 - starts talking about the "Energy in these high note key changes".

Just proves when we start playing around with switching between types of Keys - amazing things can happen.

...helping me to better identify what I enjoy in music!

Key Changes: A Complete Guide to Musical Modulation at musicnotes.com

GregW posted this video in my "Modal Scale Keys" thread - I'm also posting it here because starting at 17:00 the explanation of Modulation (key changes), and how the Beatles used it, is PROFOUND!

The Beatles: a musical appreciation and analysis by composer, Howard Goodall CBE

Felt the need to transplant your Adam Neely video here (from Modal Keys)!

How To Change Keys

I have seen this!

It's GREAT for showing how chords can be used to modulate in a tune.

Going it over again reinforces for me how important modulation is!

Was thinking about when I mentioned the Freemount Bypass video in F/Fm was only one note up from thesession.org transcription of E/Em.

Read about how "Modulating up a step (either a half step or whole step) is by far the most recognizable form of modulation because it rarely uses a pivot chord, but instead abruptly jumps from the old key to the new key." (musicnotes.com I previously linked)

Guess I just can't get enough of Adam Neely! (lol)

This time, talking about Bossa Nova - specifically, "The Girl From Ipanema".

One of the 1st things I found REALLY interesting, is the negative association with the USA for dumbing down to 'easier' keys - especially for original music composed in other Countries!

"The Girl From Ipanema" is just one example - traditionally played in F here, but played in Db in Brazil.

Cultural prestige?  "You're not a true musician unless you can play in Db"?  I assume that's because everyone freezes up when they see 5 flats?

Well, EVERYONE knows how to play in the D Major key.  Db is ONLY a half step away!

WHAT IS IT?  I'm suspecting it might have something to do with harmony or chord progressions, but that hasn't 'clicked' for me, yet.

Personally, I decided to tackle Db 'head on', months ago - found a couple pieces I liked in Db and have been playing them enough now, it's no big deal. 😊  Of course, I started out learning it using a tuner to make sure I didn't slip into another key.

Anyway, looks like the original music was written in the key of G? 🤪

The other thing I have a hard time with "The Girl From Ipanema", is there's modulation in the 'B' Part that would seem to be better understood if those key changes were notated as a Key Signature at the beginning of each phrase!

I'd much prefer reading a score through for the 1st time that gives me a 'heads up' for what's to follow.  Maybe help the brain make the switch?

🤔 All in all, the American (USA) influence on Bossa Nova was pretty interesting.

First time that the BLUES scale Counterpoint used so prominently in Brazilian music!

Interesting chord progressions and 'Turn-around' - Am7, Ab7, Dbmaj7 and Gbmaj7 (when transposed in F) - made famous by Frank Sinatra!

MORE (have repeated this elsewhere) - "Improviser's need to know what key a chord is in order to improvise around that chord progression." 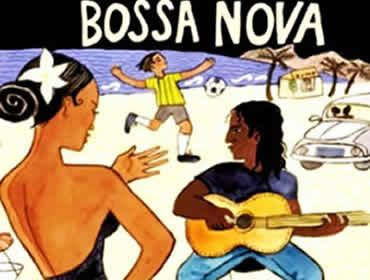 I believe sticking with this video to the end, for when everything is put in context, can lead to new/better understanding for harmonizing and playing back-up, in general! 😊