Some examples of when it might be preferable to use a meter change even when largely sticking to two time signatures:

4th movement of Borodin's 2nd Symphony: at the bottom of the picture you can see it alternating between 3/4 and 2/4 time. But 5/4 doesn't quite work because it isn't always alternating; there are sometimes more 3/4 measures. I suppose it could be notated with meter changes between 3/4 and 5/4. Still, Borodin most likely wanted much stronger emphasis on the stressed beats than you would normally see in the middle of a measure. 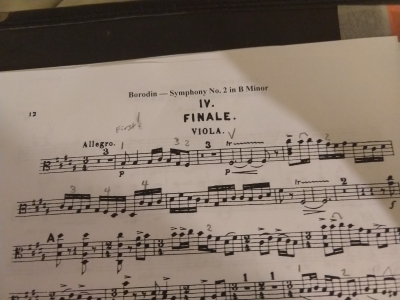 Ernest Bloch used a different solution for the first movement of his Concerto Grosse No. 1. Here's the first page of the first violin part. The movement goes freely back and forth between 4/4 and 2/4 time, often alternating but not always. Bloch chose not to notate each meter change, but instead simply put both time signatures at the beginning to indicate that he would be using both. 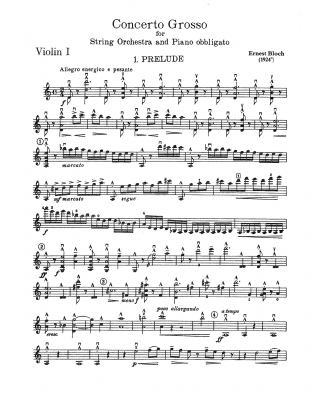 Sure hope you're feeling better!

I definitely appreciate being able to learn as a topic arises and you are so generous!

It's going to take me a bit to absorb everything here, but I've started reading/listening to some music that uses hemiola.

You always help round out my perspective on a subject - Thank you!

GregW - You always step up at the right time, too!

BillyG - This is a great thread!

I have so many tunes in my head that I'm doubtful anything original could pop out!

Looking forward to when you crank out more!

ELCB said
......BillyG - Guess I was thinking I'd heard you play enough, but I must be projecting my own preferences here - sorry!

Thought you might be able to use a combination of fractional quavers & rests, possibly a compound time signature (all the way through) to help express the fun/light heartfelt way I've seen you play.

Sure takes me a long time to narrow down what I really want to say!

So, did you decide to stick with your 3rd version, or 2nd? - Emily

My original post was just set up for discussion only (which we've had a lot of !  And that's a Good Thing !) and really to get an answer to the question I posed in the original post which was -

Do you care about having mixed-meter scores, does it concern you, does it matter ? LOL

I'm just curious about this because as I say, it really matters-not to me, but I do appreciate that it can sometimes cause confusion - especially if simply presented with a new score, having never heard it played....  And yes - of course the 3/4-all-the-way-through-score could be readily clarified by specific up and down bow indications, I accept that.

Might I even suggest (tongue in cheek, don't take it seriously!) the following notation is just ideal ?  [ Actually, it's not, because I had to remove the repeat and the volta 1 and 2 ...  but you'll get what I'm hinting at..... and to make it identical to all the other 3 versions when played I'd have to replace what is now bar 82 with another 24/4 bar, same as the first one, but with the final 3 notes changed to what's currently shown in bar 82 (and "lose" that original bar altogether) ]

Also @AndrewH - wonderful - many thanks indeed for stepping in with these examples!  Notational form is at least one area where classical violin and folk-fiddle can meet (assuming the player is not a fiddler who plays only by ear) - just sometimes wish some of the hastily scored-up fiddle tune sheets one sees could be as clear !  I guess it's similar to what you say - The rhythmic device used in the original post (three two-beat groupings in two three-beat measures) is common enough that there is a term for it: it's called a hemiola. Typically in the classical world it's written without any time signature change because it's fairly obvious to musicians that they are seeing a hemiola.   So there you go "a hemiola" new one to me - and I have learned something from this exercise, thanks ! Quote from one reference I found - A hemiola is a rhythmic device that gives the impression of the music speeding up. Music which was originally in triple time moves into duple time. This gives the effect of triple metre moving to duple metre.    That's precisely what I had hoped to achieve!  Awesome !

Just to make the Dvorak a little more clear, here's what it looks like on the page (beginning of the 1st violin part). If the hemiola isn't entirely clear, you can always write in accents. Here, the accents are notated the first two times, and then after that the player can infer that similar groupings are hemiolas. 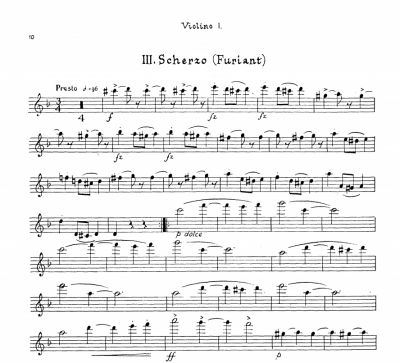 BillyG - This is a great thread!

I have so many tunes in my head that I'm doubtful anything original could pop out!

Looking forward to when you crank out more!