The wonder of 5ths (as a power chord)

The wonder of 5ths (as a power chord)

I'm currently working on a project featuring the use of an electric violin (and the resultant audio will be subject to extensive effects) - which brought the "power chord" - as beloved by rock guitarists the world over - to mind.

But, you know, we can have them as well on fiddle.

So, if you haven't met it yet, briefly it is ( - or can be - there are variants ) a simple 2-note chord (yes, I know, can 2 notes make a chord? - and although standing-alone a 2-note chord may be indeterminate or ambiguous, in my book, it is a chord in the context of what happens to be around it... But that's another discussion entirely !!! )

Here's an example - very simple one - imagine two separate players, one playing A4, the other E5.  Technically, that's two basic frequencies of 440Hz and 660Hz ( ie a musical 5th ( 3/2 ) apart.   This is just the same as one person double-stopping (well, these are already open strings, but you know what I mean ) the A and the E - but - it applies anywhere where you double stop a pair of adjacent strings at the same point.

What happens?  And what is this "power chord" thing ?

Well, what happens is that we perceive the mix of the 440 and 660 separate tones mixed together, and in doing so, we also hear the beating between these two frequencies. In this case, the beat frequency is simply 660 - 440 = 220.  So you will perceive a 3-note sound, consisting of A4 , E5 and, yes, A3 (the 220 Hz beat).  That's the (or at least one form of the) power chord, adding in an an apparent third-voice, being an octave-down on the lower of the two frequencies originally present.

You can visualise it rapidly in something like Audacity - just create two simple,clean tones in separate tracks, then mix and render the two together to a new track.

In the attached image, the "What you hear" trace at the bottom clearly repeats once for every two repetitions of the A440 (top trace) - so it MUST be half the frequency.

Electric guitarists will often make it a 3-note "combination" by playing the octave-down note as well.  Again, although here there ARE 3 notes, some still prefer not to refer to it as a chord - it has no major or minor "tonality" about it - they would describe it ( I suppose ) as basically a dyad consisting of the tonic and a fifth-above, plus the perceived (or possibly actually played) tonic one-octave-down.  But, as mentioned - that's another story (and my be worthy of a topic in the "theory" section if anyone cares to run with it!  Hint, hint !!! ) 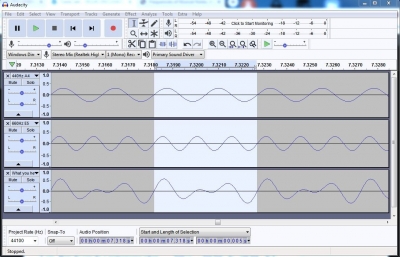 That's a wonderful frequency of one of your voices. you succeed.