A friend of the family confirmed MacMaster died in his home in rural western Cape Breton in Nova Scotia around 9 p.m. Wednesday. 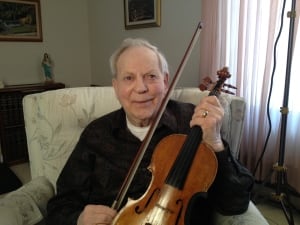 A member of both the Order of Canada and the Order of Nova Scotia, MacMaster was born into a Celtic-speaking, musical family in the northeastern Ontario mining town of Timmins. (Joan Weeks/CBC)

MacMaster is credited with bringing Cape Breton fiddling to the world stage. He spent his career with Canadian National Railway, but often played fiddle on the side most nights of the week.

Here's a video overview of Buddy MacMaster's influence.  Thanks to @Raywells  for posting it on the chat.  Thanks to @KindaScratchy for the other link, which contains a lot of good links.

He was a part-time fiddler, retiring from his railroad job after 45 years.  The video states that he was to Cape Breton fiddling what Bill Monroe was to Bluegrass.

He didn't usually "play the violin for free", but it seems that he played about a million dances.  The video indicates that that is one thing that distinguished Cape Breton fiddling from other genres---that it stayed close to the origins of fiddling by being tied together with dancing.

To our Roving Report Diane.

Thank you for that article and for posting.  It was a very nice article and it gives me some more fiddle music to youtube and seek out.

AWESOME!!  Thank you for posting this!!

Really great.  I really like the Cape Breton style. It's too bad he passed last week, but I'll bet they're dancing in heaven today.