Can I use a pickup with earphone during orchestra rehearsal?

Can I use a pickup with earphone during orchestra rehearsal?
Can't hear myself play.

Our regional symphony rehearses in the high school band room.  We don't rearrange any of their large instruments or equipment, so our five first violins are right in front of the saxophones, often drums, and other winds. I'm in the last chair, and much of the time I can't hear myself playing at all. I have a moderate hearing loss, and my hearing aids let me hear what the director is saying, but it doesn't help me hear myself play with the loud instruments behind me. It's only during rehearsal; concerts are not problem on the auditorium stage, but it really puts a dent in my ability to play confidently.

If I had a pickup on my acoustic violin, could I unobtrusively use a single earphone?  I'm not sure how these work.  I've had a Yamaha Silent Violin for maybe 12-13 years but either you use headphones or an amp, but not both. If a pickup can't be directly connected to an earphone it won't work, I don't want to have to add any other equipment.

If this would work though, would the least expensive pickup in the FiddlerShop work ok?  Or are there other solutions?

Unfortunately you cannot use an earphone directly to a pickup without the help of a preamp. A preamp doesn't have to be that big and would suffice running off a battery.
I think that something like this would work:
http://www.soundprofessionals......AuBX8P8HAQ
or this:
http://fiddlershop.com/electri.....reamp.html
My suggestion would be to have the organization get clear plexiglass shields to place behind individual string players in the back row. I have personally witnessed this solution and it does help.

A couple of thoughts..

1.) Neither one of those would actually hook directly to the least expensive pickup on Fiddlershop.  I assume you mean this one:

The jacks on both of the preamps Pierre gave links to look too small for the 1/4 inch plug, so you would need an adapter.

2.) I don't know for sure about the "Sound Professional" ones, but the LR Baggs is probably a bit of overkill for just an in-ear monitor.  Not that it is a bad unit at all, but it is more the sort of system that you would want if you needed to supply a great sounding signal out to a mixing board or recording system while playing a violin with a pickup.

Listening with just one ear in a loud environment, I think you may be looking for just being able to hear yourself and maybe protect the ear that the horn section is aimed at.

...since the "Super Sensitive" that is on Fiddlershop is made to plug into a guitar amp.

You would still need an adapter, something like this:

Fortunately, they don't cost much.

Plug in any earbud you like and you should be set.

The plexiglass shield that Pierre explained would be a great solution, and probably the most deluxe option, if you can talk the organization into going for it.  I have no doubt it would help the other string players as well, while keeping the visual presence for the horn section good.  But they may not be so willing to spring for such a measure "just" for practice sessions.

FM and Daniel, thanks for your speedy replies! I've been looking and reading reviews on these.

Daniel, the pickup I was looking at is the external one,

When you say the preamps would not work plugged directly in, do you mean because of the difference in jack size only? I don't need an additional amp with a preamp, right?

My thoughts so far:

-- The Sound Professionals preamp is very small.  I want to keep whatever I get in my vest pocket. But I can't find any reviews on it. I like the mini-jack size a lot.

-- The GigPro preamp is twice the size and weight, but would still fit in my pocket. Many good reviews mention how sturdy it is.

-- The Joyo amp's price is great but several reviews say it's flimsy and doesn't last very long and the sound is so-so.  But maybe so-so is all I need for my purpose.

The plexiglass sounds great but not realistic for our situation. Small volunteer local area orchestra, we survive on donations at concerts.

Any more thoughts from you gentlemen or other forum members?

Fiddlergrrl, from the description, I think that the one you posted the link to is just an output jack since it doesn't actually mention a pickup.  I think that is to provide a 1/4 inch jack for the little mini plug that comes with some pickups that mount directly on the bridge or where they're built into the bridge so you'd be doing a bridge preplacement for.  You'd want to ask Pierre/Fiddlerman to make sure.

The Baggs is a preamp.  No mention in any review I've seen of it having an output for headphones, and the pics I've found only show a 1/4 inch output jack.  It is most likely intended to be between the violin or guitar pickup and an amplifier.  Maybe Pierre has used one with headphones and can say for sure, I don't know.

The Sound Professionals one, I haven't found any info on.  But since it calls it a preamp, it is probably not a headphone amp (which is what you'd need).  Never having seen one before and not being able to find specs on the unit, I can't guess if it has an output for headphones.

Preamps are to get the level of the signal up enough to work with a guitar amp or sound mixing board input.  That isn't enough to drive a set of headphones or an earbud or etc.

The Joyo.. Sound quality?  I wouldn't expect it to be any better than any small practice amp at that price.  Flimsy?  Well, I suppose it would depend on what they're comparing it to.  Compared to say, a guitar stop box made out of metal, I'm sure it would be.  LOL  It is a lightweight gadget made of plastic.  It is only going to hold up to so much rough use.

I do use a similar little gadget:

I've had it for 3 or 4 yrs and use it fairly often for electric guitar.  I don't know as I'd recommend it for violin, since mine is made to imitate a particular brand of amp and I think it would have kind of an odd tone with violin.  Especially an acoustic violin with a pickup.

I don't use a pickup with acoustic violin, myself.  If I want electric, I use my electric violin.  But I understand your situation, at least somewhat.  Not having experienced the volume levels where you and the horn section sit, I can't say for sure if any small headphone device will really be enough.

Nurses tend to keep odds and ends of work stuff, it comes in handy in the darndest places.  While I was considering the cost of a pickup and amp, etc. I came across one of my old disposable stethoscopes.  Then I dug out my collection of tubing -- IV, suction, enema, all that stuff.  It works just right with oxygen tubing.  (IV tubing is extremely loud, enema tubing is extremely dorky.) The tip is one of the EarPlanes (inserted backwards) with the little bead inside removed.  I also tried taking apart an ear bud and a earphone that hangs on the ear but for various reasons they didn't work out. The stethoscope is held on with scotch tape which doesn't seem to hurt the finish, as I don't leave it on.

The only bummer is I won't get to try it out in rehearsal until the fall season.

Here's the brilliant contraption.  I don't think more than a couple of nearby people will notice it: 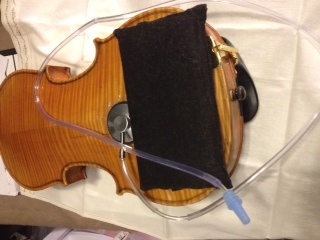 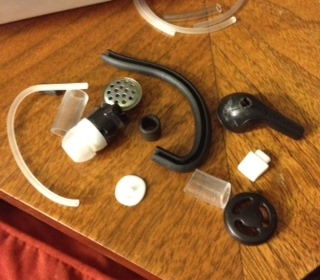 That is downright brilliant, Fiddlrgrrl!  A purely acoustic solution, even..

Man I was just trawling (not trolling) through the posts I haven't caught up with yet - I LIKE THAT @fiddlrgrrl - nicely done !  Clever stuff !  Cool !

fiddlrgrrl sent me a private email but I didn't know it was fiddlrgrrl with these pictures. She was suggesting an idea for a monitor with the subject title "Violin amp -- Dork Factor reduced."
I said to myself, This would be a great solution for fiddlrgrrl.... and perfect timing. Told her to post the pictures here and that fiddlrgrrl would be very happy.... She then responded "I AM fiddlrgrrl" LOL

So, turns out that she is a genius as well.