Photo of My Fiddle

I purchased her in Oct 2018. She is a Rudolph Deutsch. My first one that I purchased was a Mendini MV 300. Do not thumb your nose. I put Tonica strings on her and she sings. It is not rich like Rudolph, Dini is hollow sounding, and eerie. I rewrote a cello song, Moon Over the Ruined Castle (A spooky sounding song)in treble clef and that song is very cool on Dini. I just don’t have it down pat yet.

Dini was purchased not expecting much quality, I just wanted to see if I could hold and bow, and like it before spending more money. I could and did. I was so surprised after I put the Tonicas on. I still use her.

After finding a violin store 1 1/2 hours away, we went there. I tried some violins and ended out with one that was a little more money than we had figured on, but within budget. It was a Revelle XQ500 or QX500 (something like that). After playing Revie for a month, I decided I wanted a mellower sound, it came with new Dominant strings. We could trade in Revie for a violin of equal or greater value, so we went back before I had the opportunity to scratch. Any repairs for eesale would be deducted from tradein amount. I got full trade.

We tried more violins and upped our desired pricepoint. I love Rudolph. She came with Dominants and a Passione E. Love that E. Rudolph was a bit over what we planned, but she (guess I should be saying, “he”) is so worth it. They have a 3 month payment plan with no interest. Wow. I had thought I was going to get a Scott Cao. That is what I was intending by reading about it. I liked Rudolph better and could play Rudolph easier. They did not tell me which violins were which.

Both visits, I tried about 10 violins. Some were repeated for the second visit because the low end, price of the Revie trade, had more violins at the same price and the high price range from that first visit was inside the second visit. Rudolph, though, was not in the first go round, neither was the Scott Cao. They were both too much over my first price point.

Scott was within my second visit price point. Rudolph was over. The luthier apologized for the one I liked being slightly above my price limit, LOL. It was still within limits, or I would not have purchased it. Our high price point we went in with was lower than we could afford. We were prepared. We kind of figured we would need to spend more to get a good sounding violin, after the first visit. Revie was nice and I would recommend one, but not quite what I wanted. Rudolph feels so much better when I hold her, and sounded so much better with the Dominants. They all had Dominants. I so not think rhet out the Passione E on the Revie price range violins. If they did, it sure sounded better in Rudolph. 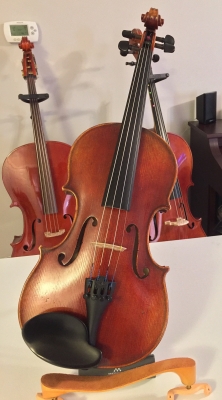 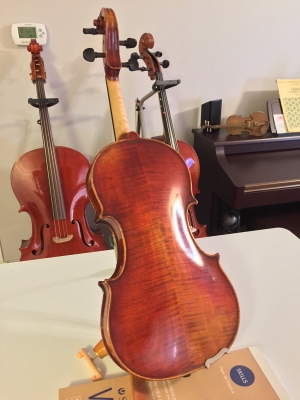 I also have a viola. I purchased it at that store a week after purchasing Revie. That is when we found out about the 3 month plan. We did that with the viola. She is all paid for and I love it. I think Rusolph is paid foe now, too.

So that is my fiddle story, and I am sticking to it.

Looks sharp with a great pattern to the flamed back. Is that a wolf eliminator at the tailpiece? I'm sure it has wonderful tone. Are those pics from the shop or do you also have a cello and bass?

I see quite a few members here have both violin and viola. I've been awfully tempted to get a viola too but I'd want one at least at 18" and they're harder to find. I've got a long wingspan.

If, probably should say, “when”, I get another fiddle, it will be a Fiddlerman fiddle. That was going to be my goto until we found a shop within driving distance, we did a lot of browsing of the Fiddlerman site, bedore we found the semi-local shop. I am really impressed with everything I have read, info and reviews. Now I want another, but maybe a viola. My viola I bought is not the same price range I spent on the fiddle and may want a better sounding one when I get into it. I suspect that I can get more bang for my buck from Fiddlerman. Don’t know why I am thinking that, but for some reason, that is my thinking. Will definitely check on it when it is time to up my viola.  Yes, definitely. Maybe next year, or later this year. I think I will be sqitxhing to viola lessons come late Spring this year, or mid Summer. Shortly after that, I might want to start thinking about upping my viola.

Fiddlerman, do you ever have any nice real mellow sounding, rich toned used (returned) violas at a nice discount? ? I am going to check your viola choices now, My back acting up today preventing fiddle playing is driving me nuts,

Shane, maybe sometime. I really do not play for people. When I toom classical guitar lessons my teacher always told me to play louder, ?

@@Amateur and others.  The black accessory above the tail piece is an orchestra mute.

Amateur, the photos are from my house. I have three cellos. I started cello first. I spent a bit of money on my first cello, lighter colored cello on the left in the photo. It does have easy tune gold colored geared tuners, but I don’t like the look of them because they do not look like tuning pegs, I also think the other two sound better. My second cello, not in the picture, was a pawn shop purchase for $125. Did not need any work on it and came with a fantastic bow. My third cello, darker cello near the piano in the photo, is my non-orchestral music store steal, $50. It is an Andrew Schroetter carved wood, not plywood, cello, 1983, Western Germany (label inside). It is my favorite one. Lovely sound, but so loud! Waiting for strings that should tone it down, that I ordered from Fiddlershop. It needed quite a bit done (parts) but the body is sound. Needed tuning pegs, sound post and bridge. It did need strings, but I don’t count that because they are replaced periodically.

So keep your eyes open, but look,them over carefully. I was very lucky with the pawn shop and rhe non-orchestral music shop that took it in as trade.

When you plan on coming to Fiddlerhop, please inform me in advance and I'll search through our inventory. We have so many instruments that if you can't find your instrument here, you will have difficulties finding it anywhere. LOL

As for discounts, I would look for b-stock instruments. Instruments with knots or varnish flaws or similar. All our instruments are discounted, to begin with.

We get most of our stuff from the makers themselves and offer great deals, IMO...

Fiddlerman, you are quite a ways away for a day trip. That is why we ended out going to the semi-local violin shop. We make two extended trips a year, both to see our two little granddaughters as much as we can.

I have never been able to figure out why people have issues with varnish flaws, knots, etc that cause sellers to have to discount. Years ago we got our son a really good guitar at a discount because of a scratch on the back that you needed a magnifying glass to see. It was discounted. It was an electric guitar. I guess I am just not picky.

I was just looking at your violas and watched the videos of the ones that had videos. Wow, they sounded good. Even the lower end priced ones. Very impressive. I am making a list for when I really get into my viola and maybe want a different sounding one than what I currently have.

@cid.  The cello toward the left in the photo.  Does it have geared tuners like a string bass?  New to me.

@Irv I don’t know what a string bass tuners look like, but the previous owner removed the tuning pegs and installed gold colored tuners. I don’t like the look, but they make the strings easy to tune. Belle, not in the photo, has geared tuning pegs. Got her at a pawn shop. We might get them installed on that cello you are referencing, but not until after we put them on Ada, the cello next to the piano in the photo. That will be a while.

Looks beautiful! You have a lot Instruments to play on ??

@Mouse - I am not against people supporting their local shops.

They need business as well.
We do our best to get everyone's business but we understand your needs well.

We offer the opportunity to purchase from us wherever you live and have our experts and me to test and adjust the instrument. Offer great set-ups, great prices, 45-day satisfaction guarantee, help choosing instruments, videos of the actual instrument if requested, and even multiple instruments to choose from if requested. Also in-home trials. All of this to make online shopping easier and viable for everyone.
Our growth has given us great buying power with some of the top makers allowing us to offer better prices to the consumer.

Great philosophy. There is definitely a need, and room for both.

I love your violin. Thank you for sharing your "baby" with us.

I love my Fiddlerman violins.  The other thing is I love Fiddlershop.  They treat me so awesome... EVERY SINGLE TIME.  I feel like it is my local shop.

I will forever buy from Fiddlershop.   THIS IS NOT an ad even though it sounds like it.

Am I biased? Perhaps.... but the biased comes from excellent products and excellent service over six years of time.  AND even with the big growth of the shop, the service is great, probably got even BETTER.

I agree with your assessment of Fiddlershop, coolpinkone. It was going to be where we were going to order my violin from, but then we found a violin shop 1 1/2 hrs northwest of us. I do order many things from Fiddlershop now, and I have always been more than satisfied with the customer service.

I keep thinking the violin shop is 1 1/2 hrs northeast, but it is more like 1 hr.