Hello!  I am new to the board but an old time stalker of Fiddlerman (got your carbon fiber bow and I love it!) and I have a question!  I have been playing my violin for about 4 months now and I am taking lessons and doing fairly well I believe.  However, I have one small issue that I am looking for advice on.

I have a 15+ year injury to my base knuckle in my right hand thumb; namely it's broken because I didn't know I had broken it (thought I sprained it) and by the time I got to the doctor it had already mended.  Now I was given the option of having it rebroken and pinned back into place, but considering I had lost none of my thumbs mobility and had no insurance *laughs* I decided against the procedure and have not had a problem since... well up until I picked up the violin that is.  The violin grip with my thumb shoved into that indentation on the bow is starting to cause sharp pain and at times discoloring at the base knuckle of that thumb.

I asked my violin instructor about gripping the bow with my thumb under the frog because it does seem to help and while she told me I could do as I wished, she did impress upon me that, that grip could interfere with my bow strokes and that I should work on not tensing up my thumb instead.

However, I have noticed that I am having a far easier time moving from string-to-string and my slur timing (learning The Parting Glass) as well as nearly eliminating bow trembles with my thumb under the frog.  So... my question is, I want to continue to play this way, but in the long run should I? 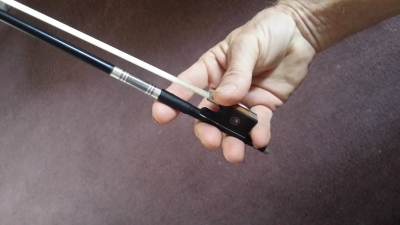 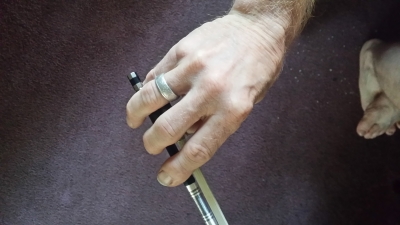 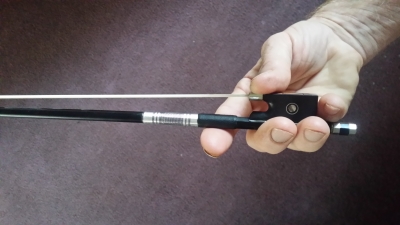 Actually I had an injury just recently with a bandsaw ripping my thumb at the end, so during the healing process I had to hold the bow like you're saying, with my thumb underneath. It was so comfortable and easier of course without pain, that I have kept it and find my ability to hit the C String (Yes, I have a C string on my violin, it's a 5 string electric) easier as I don't have to raise my elbow as high.

If you aren't going for the professional concert violinist thing then I see no reason why you shouldn't hold it in whatever way makes it easier for you to play.

I've read posts here and on other fiddle discussion boards about the "thumb under frog," or TUF, bow hold. In fact, I think I responded to -- or even started -- a thread on the subject here (did a quick check but couldn't find it).

My understanding is that it's an established bow hold, at least among fiddlers. You probably won't find many classical violinists who use it.

I've played around with the TUF hold myself, as I have some tendonitis in both wrists. I think the TUF provides a stronger and clearer sounder, but with less flexibility of movement. Definitely an individual call.

Some "schools" of teaching start both children and beginning adults with the Thumb-Under-Frog hold and just call it a beginner hold.  Graduating to the "professional" (more standard Franco Belgian) is something they do some months later, as the stuent is comfortable with it and *needs* it for techniques that need a somewhat more "agile" bow.

So I don't think that you are going to do yourself some huge artistic damage by using it for at least a while.  But in maybe, I dunno, 6 months or so?   The thumb may be sttrengthened and limbered enough from practice and playing that the more standard Franco Belgian hold that a lot of people think of as the only "proper" way of holding the bow may no longer be any problem for you.

Or it may not, since the discomfort may be due to the old injury.  I'm not a doctor or physical therapist, and I don't know all the details and xrays and all that of your thumb's situation.  Neither does your violin teacher, unless she has had medical training on such things (which would not usually be included automatically with any level of violin playing or teaching, so far as I know).

So far as tensing up your thumb, that isn't good in TUF hold, either.  Put simply, the tighter you hold the bow, the less flexible youyr bow hand is, and that will not help your playing.  Even using TUF, try to keep the thumb gentle and curved.  Curved forward, that is, not backwards.  Gripping hard enough to bend the thumb backwards, you're locking the thumb joint, and it limits the range of movement that you may need later.

So my thought would be maybe you can keep with the TUF for now, since the FB (Franco-Belgian) hold is causing you pain.   That may or may not get better after a few months, no telling with your injury.  But relax the thumb and work on keeping it gently curved anyway.  In any hold I can think of, a tense thumb isn't going to make playing any easier or better.  The TUF *may* be a bit of an obstacle for some techniques you may want to learn at the level you want to be able to do them at.. Later.  But for beginning, it isn't such a bad thing, and it is the standard beginners' hold with some teachers.

Maybe you can "grow out of it" later.  If not, I have seen some fiddlers who certainly seemed to play quite well with a TUF hold.  I wouldn't worry too much about using TUF at the moment, if it saves you some pain.  Pain is not something to "push through" in a case like this (or most cases in music).. It is a warning from the body that there is a problem.

Thanks guys!  I believe I am going to stick with the TUF hold for the time being.  I used it all through my pick-me up practices yesterday and had 0 discomfort at the end of the night.  I had not known that was a common hold for fiddle players which makes me rather happy now that I think about it as the only reason I picked up the violin was to learn old Irish rebel songs!  *laughs*  Thank you again for your input!

I agree with what has been stated here.

"sharp pain and discoloration of the thumb at the base."  UM.. that's not good nor will it motivate you to make beautiful sounds with your violin.

I am not an expert... but I say.. hold the bow how you can.  I am sure there are ways to compensate with the TUF hold.  Many times people have to take what they have in life and make it work.

Many times it is the same or even better than the "way it is supposed to be."

Well just a quick little update!  TUF is in!  Absolutely no pain and fair better control of the bow!  *dances*  Very happy!  Thank you again for your input on the subject!

@b.rabbit congratulations and thanks for the update.

Nothing better than a "happy dance"

b.rabbit said
Well just a quick little update!  TUF is in!  Absolutely no pain and fair better control of the bow!  *dances*  Very happy!  Thank you again for your input on the subject!

Glad that it is working for you. The interesting thing about playing the violin is that even the greatest players have slightly different techniques and are able to accomplish great things. What works for one is not guaranteed to work for another player. If you find something that works for you more power to you.