What is saccade bowing?

What is saccade bowing?
bowstrokes

I came across an etude in the Bang method, vol 2 (Number 185), which is supposed to be practice for "saccade bowing."  Uncharacteristic of the method, there is no instruction of the stroke and it seems to come out of nowhere, as it is just in that one etude.

I have tried to look online for any explanation of what "saccade bowing" means or a video demonstrating it but without success. If I am identifying it correctly, it is notated like a hook stroke- 2 staccato dots under a slur.

I suspect it is an old fashioned term which has been renamed but I am not sure. Otherwise, apparently we have lost a violin stroke to the mists of time-- not likely!! Does anyone have an idea what it is or where I could find more information about it?

You are correct... there is not much information regarding this bow stroke.  In fact, the little I did find was rather vague.  I have not found any detailed instruction on the bow stroke.  Just generalities.

Saccade is a french term meaning to jerk.  I did find the notation on some scores and it looks like this: 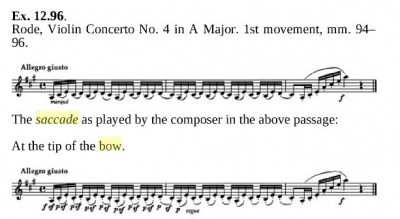 So from this reference, and the meaning behind the term, I believe it is a quick hooked bow with possibly a "jerky" motion.

Also note that the dynamic noted on these indicate psf  and sf, which is played with a loud attack and very quickly to soft.  This would support the quick, cutting motion to achieve this bow stroke.

I don't know how much you've played, but for me this would be an advanced bow stroke.  I do think that in most music it would commonly be notated as hooked staccato.

I did some googling and it was discussed by some group ina forum I never ran across before. They mentioned it was named after the term that means a particular rapid eye movement.

I also found this, photo attached. It seems to me to be similar, in ways to Martelé. Similar, not alike, in that they accent. One article I just read said it is used to break monotony in a piece. It was a copy of an old article,  you know with the thick black ink, like in the photo I attached. You might have to zoom in. Pretty much concurs with everyone else. Maybe it is an archaic term now? 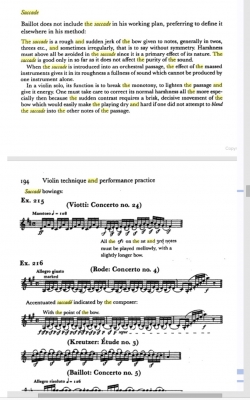 Thank you, Pete and Cid, for your detailed and clarifying responses! I think the explanation of the dynamics really brings home the point to me, and also why it would be notated similar to a hook. I haven't tried it live yet, but I can already imagine where it might be useful, especially to bring rhythmic emphasis in a phrase.  If it is uneven in duration (unlike a regular hook), it might explain the name, as well, especially with several in a row.

I agree, Pete, this does seem to be an advanced stroke. However, in the course, the etude I mentioned immediately follows many detailed exercises in dynamics, so it sort of makes sense where it is in the course. (Not that I will able to do it without a lot of practice, especially at the tip in your example. I suppose that's why it's an etude :))

I agree, Pete, this does seem to be an advanced stroke. However, in the course, the etude I mentioned immediately follows many detailed exercises in dynamics, so it sort of makes sense where it is in the course. (Not that I will able to do it without a lot of practice, especially at the tip in your example. I suppose that's why it's an etude :))

If I see saccade in my music, I will blame you! LOL!!

I Googled 'saccadé violon' like an amateur (see below).

Wiktionary seems to imply that the salient thing is to sound both the G and the D strings together by means of the violent pressure on the Sf (third note of @pete's example), not that I'd normally go to Wiktionary for anything that specialised.

And normally I'd be very suspicious of an invented generalising name for a very specific technique that may be unique to one piece of music (if it were all about the Rode).

Wordnik describes it as multiple-stopping by brute force rather than by technique.

So, again in Pete's example, when going from C to D it seems to be required that you play the open D string sf (don't attempt to use your pinky) and sound both strings, and so on. In other words, forget all that clean-pivoting practice you did, and just blast through it!

Further French Googling, thus: ' "saccadé" "violon" ' revealed they probably don't recognise the expression; and, if Wiktionary and Wordnik are right, I'd say it was misnamed anyway: if Rode had just put martelé marks under each 1st and 3rd note and the piece was fast enough, lesser players would automatically have got the desired effect. Funny to think he may simply be telling experts not to overpractise it! Now, as it is, lesser payers will be forced to overpractise it! (tongue-in-cheek smiley)

@Gordon Shumway You and I are in the same page with likening it to Martelé. Sure sounds like it.

I think you are supposed to jerk, make a rapid bow change to a partial double stop. In other words hit two notes at once instead of individually as written.

I'm not completely sure. Don't hear this very often.

I end up in the strangest places!

Just ran across this article (with video) about "saccade bowing".

It just might help clarify exactly what it is... or does it?

In the year since I commented, in total ignorance, above, I have not used it, not needed to know it, forgotten about it and forgotten I had commented on it.

If I come across it in an orchestra I will bluff it.

Rereading what I wrote above, I'm not ashamed of it. It could perhaps be shortened.

Perhaps the best summary is, "if you can play that Rode at all, then you will probably be using the saccadé stroke (if it even exists) without knowing it or needing to know it"!