Learning to Record with Audacity

Probably the only recording software where I will give a step-by-step beginner oriented talk on it will be Audacity.  This isn't necessarily because Audacity is the absolute best, but because it is free and they have a version for all the major platforms/operating systems in common use.  In other words, no matter what kind of computer you have, there is probably a version of Audacity that will run on it and it won't cost you anything.

So the first thing to do is get a copy of it and install it.  I'm going to have to assume that everyone either knows how to install software on their own computer or knows someone who can give them a bit of help.  Since every machine/platform/operating-system is a bit different on how to install software, I can't give a list of steps that would work for everyone.   Anyway, you can get the current version of Audacity here:

After you have it installed and you run it, you should get something that looks similar to this. 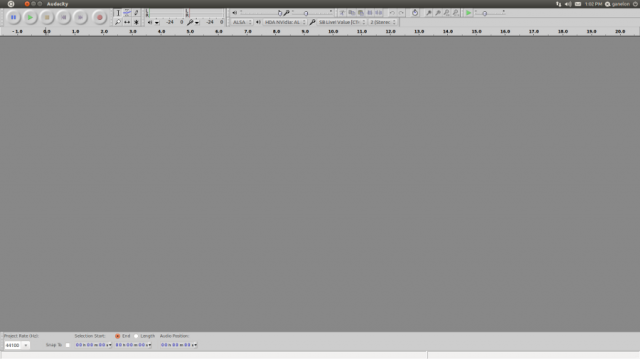 Not a particularly pretty or user-friendly looking piece of software, the window will usually start out as being a lot of empty space and some buttons and other controls that may seem a bit cryptic at first.  Fortunately you won't need many of them to just get started.

There are a lot of tutorials out on the net for using Audacity, but since people tend to avoid those for some reason, we'll cover the very basics here.

Ok, so you have Audacity up and running.  We will assume you also have a microphone or something like that plugged into an input (mic or line in) on your computer and that maybe you already know it works from using it on some other piece of software like Skype or Teamspeak.

Now, if you look in the upper left hand corner of the Audacity window, you'll see something that looks like the buttons I have circled in red here. 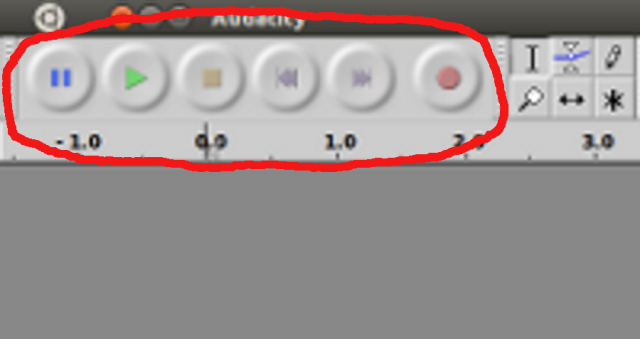 They may look familiar from other devices you may have used before.  I would usually call them the "Transport Controls", since they are sort of based on older recording machines where tape actually moved (hence the word "transport").  The blue one is pause.  The green triangle is "play".  The yellow square is "stop".  The two small purple triangles pointing to the left will jump back to the beginning of the recording.  The two little purple triangles pointing to the right will jump to the end of the recording.  The red circle is the "record" button, and that is the one we are going to be using first.

So, click the red "record" button and make some noise.  It doesn't matter if you play your violin/fiddle or talk, or clap your hands or whatever.  After you have played or made noise for a few seconds, click on the yellow "stop" button.  There should now be something in that big blank part of the window that will look something like this. 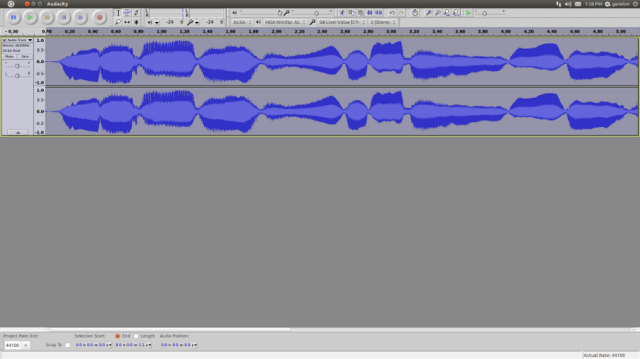 The kind of lumpy squiggly shape on your screen won't look exactly like mine or anyone else's, since the sounds we used to make it won't have been the same.

But if you've got a lumpy squiggly sort of shape showing on your scree, then congratulations!  You just recorded something!

It probably won't sound very good.  But that's perfectly ok at this point.  We can talk about how to get it to sound better in the next section.  What is important first off is to get the software, get it installed, have a microphone or other sound source hooked up to an input on your machine, and seeing if we can record something and get it to play back.  Once we have that, then we can focus on getting it to sound better and what sort of other things we can do with it.

I installed this prog some time back but haven't really used it yet. Your post will make it easier when I do

Audacity is a simple, yet amazing program, audacity also comes with a user manual and they have good forum for ideas. I do recommend it.

Give No Mercy To Fear.

The manual is pretty good, and you can also find quite a few tutorials on how to do specific things with it over on youtube.

I've been trying to think of where to start, other than the basic bit given above, so far as things that would be a common need for the different genres and types of gear folks here might want.

Maybe price range and quality of recorders, Zoom makes some good stuff, I use the H4N it has external mikes and plug in ports. Price range, portability, ease of use, quality of sound, I think those would be a good start. From there mixers or whatever else that could be added too, just ideas. If you do make something like that, that would be good, recording direction is a big help, I know it is for me.
As far as Audacitys usability I am willing to share what experiences I have had, although I 'm no sound engineer, I 'll give my best. Like you also, I wouldn't know where to begin, maybe someone will start off with some questions?

Give No Mercy To Fear.