Yup here we go @gwscheer and @Fiddlerman and - well the whole FM community - this was just awesome -- Gary Scheer got in touch with me before his holiday - which happened to include a trip to Scotland - we managed to meet up - here's the low--down in gory detail.... LOL

My friends - Gary ( gwscheer in the Fiddlerman.com forum ) and his wife Karen, from the USA, spent part of their summer vacation in Scotland.   We were fortunate enough to be able to meet up in Ullapool in the north-west of Scotland where we spent a couple of hours together, chatting, taking photos, eating, and fiddling !

I puzzled long and hard on what I could get as a gift for Americans visiting Scotland. Well, needless to say - I gave up on the idea of haggis, black pudding, malt whisky and knitted-woolen Loch Ness Monsters - and decided that a video of some fiddling, with an included photo-montage of our time together would fit the bill precisely!

And - just as an aside - some notes for the technically minded -

(1) It was a warm, sunny day - but a little bit blustery - so - there was a lot of wind-noise on the original recording - which you will clearly hear while folks are speaking.

(2) My FM Concert fiddle had drifted - and there was no way I would be able to re-tune it to A 440 with my tuner in the bright sunlight - fortunately though - by ear - all strings had drifted more or less in unison, so overall it was somewhat flat of A 440 - but "well-enough" in tune string to string - more or less fifths apart ( and I DO say more or less !  LOL  - but we lived with it )

(3) Because I kind of expected this, I sort of knew in advance it might be better to re-record my pieces back at home and overlay them into the original soundtrack - which is what I did - so read on....

(4) So - back home - I split out the audio from the video and took a sample of the wind-noise, and used Audacity to do a "reasonable" degree of noise removal.  Never gonna be perfect, but, trust me, it sounds a whole-lot better than the original....

(5) Then, I re-recorded my own pieces at home - but because the original was somewhat flat - I couldn't really "play along exactly to it while listening in my ear" - so - I did a "best-take" of Scotland the Brave and The Star Spangled Banner without listening to, or trying to follow, the original.

(6) On both of these re-takes - my playing was "out" in terms of time by about 2 to 3 seconds.   Audacity to the rescue once again - adjust tempo keeping pitch unchanged.  Awesome piece of free software.  I really cannot recommend it highly enough.

(7) I then pasted these re-recorded and re-timed clips over the original playing in the video - so - although it "fits" in terms of overall time in the video - you'll notice that my bowing is apparently "out-of-synch" to some degree with the sound - but - that's the best I could do.   And it covered the occasional "hunting for the note" on the somewhat de-tuned fiddle on the original out-doors take. ( hahahahaha wicked ! )

(8) Finally - for Gary's playing - this was recorded by Karen on her mobile phone, but - unfortunately I cant get a reasonable sample of the wind-noise alone to try to perform a noise cancellation.  I did however lift Gary's audio to come close to other levels.....

I only include these tech details in case someone else ever has a similar plan to record outside - it gives a good overview of the basic "limitations" you may encounter, and ways around them during post-processing.   I may invest in a directional stick-mic and one of these fluffy wind-sock-things for the camera for future projects.

^5s to you all, especially to Gary and Karen - it was a pleasure to meet you - AWESOME !

So fun to watch, and great job with putting everything together for the video

Thanks Mandy @damfino - it was - in the words of Lou Reed, indeed a "Perfect Day" - there is no way it could have been better...

And Gary and karen - @gwscheer just so you get advised of the post - I assume you may just have got home by now !!!!!!!! LOL

Thanks so much for your time with us!   Awesome !

Very cool that you were able to meet. Nice job on the video. Looks like a beautiful place.

Bill." Ihis warms my heart. I know how very special meet ups are.  What a special time. Thanks for all you have done to share this event. Thanks for being you ... Gary, lovely to see you and your wife. Bill How fantastic to see and "meet" Debbie. I am a sentimental person and my heart is aglow from this post

Much love to all. Toni

It does look like it was a perfect day 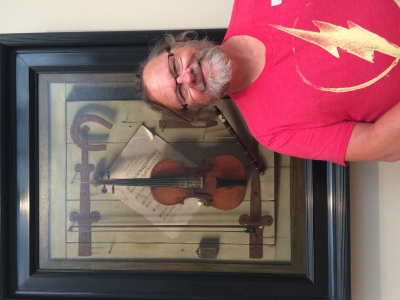 We had a great time !  Thanks for your northern Scotland hospitality and all that work editing. Very nice.  Gary

ps. We were supposed to be home on Tuesday am but now will be Thursday. Weather cancelled flight in NYC and delayed into leaving Wednesday in 2 hours so, there are worse places to be stuck. Spent morning at met (art museum) afternoon visited strawberry fields and took a nap.  Evening Broadway musical Beautiful (carol king story) . Attached pic is me with Harnett's still life "violin and music" 1888 in the met .

“To play a wrong note is INSIGNIFICANT; To play without PASSION is INEXCUSABLE!” , Ludvig Van Beethovan

Unfortunate about the delay - but looks like you made the most of it !

SO COOL!!!  Anytime any one wants to meet up in Indianapolis I am ready!!

No better place to be delayed than NYC (IMO anyway, lol).

Someone asked about this - just a "bump" so they can find it...

So much fun to meet online friends.  You did a good job on Star Spangled Banner.  That's a difficult song to play (for me anyways).