Hello! I've been playing for around 6 months now and decided to document my (hopefully) progression.

I started playing as a child, gave it up for 10+ years and rediscovered it. Molly is a very cheap 'Windsor' brand Chinese made violin off Amazon. She's pretty good but I changed her strings to Pro Arte ones and upgraded the bridge to thick maple.

I play traditional Scottish/Irish folk as part of a group on Saturday mornings and we recently got together with Patsy Reid and members of the RNSO to play a wee show around the city.

I'm working my way through the large pile of music from the group and I'm also wanting to get more classical stuff on the go. If anyone likes the tunes I can try and send them a copy of the sheet music.

I would have liked to hear you play, "Ashokan Farewell" on all three recordings. It's easier to compare.

Also,, a thicker bridge with only take away and mute the sound of your violin. Your bridge should measure about 1.5mm at where the strings cross.

So, like I said, it's hard to compare the three.

Hello and thanks for the progress update.

I like your playing.  You have clean bowing and a nice pure sound.  You play very nicely.  It was a pleasure to hear you play.  It is nice to document your tunes and progress this way.   I wish I could play that good so early on.

Thanks again for posting.

Good job SilverHalide. Must be fun to get back into learning to play violin by your own choice now years (no idea how many) later.

What are your thoughts about picking it up again now? Is it easier or harder than you expected? Did you retain a lot from childhood? How long did you play as a youngster before quitting? 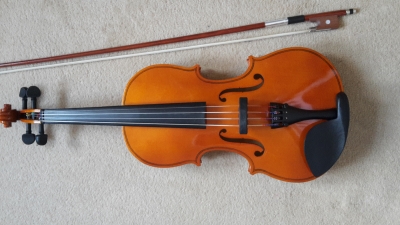 @Fiddlestix  Thanks Ken. I should clarify that the new bridge is thicker relative to the one that came with the fiddle. It is a standard blank bridge that most ships seem to carry and feels 100x more stable than the old one.

EDIT: Added a recording of Ashokan with the new one. May be a better comparison.

As I was working on the bridge I discovered the action was away too high, about 1cm off the fingerboard at the G string so I lowered it too. I did wonder why I had such sore joints lately so hopefully it will help.

@coolpinkone Cheers Tony.  Your comments are always so supportive, it's much appreciated.

@Fiddlerman it's great fun! Haha I started playing when I was about 5/6, don't remember exactly, our school had a strong emphasis on music which sadly isn't seen much today ,so we were taught strings, percussion and woodwind. I stopped when I was 12 as our music teacher pushed us a bit too hard and I wasn't interested in playing 2+ hours a day and spending 3 hours a week with the local orchestra. In high school we were taught keyboard, guitar and drums but lost interest in music for a long while.

Now, 11 years later, I caught the bug again after seeing The Budapest Cafe Orchestra play live and wanted to delve into traditional folk music instead of classical.

There is a lot of muscle memory retained when first playing, I could remember finger positions and techniques like pizzicato along with certain symbols on sheet music without too much hassle but it took about 2 months to relearn how to read again which I was pleasantly surprised at. (I thought it would take longer)

It's quite easy, but things like keeping your hand off the neck when playing and keeping a straight bow is a challenge. It's also difficult to reign myself in and take learning slowly.  I always hear a song and think "Oh! I can have a go at that." and giving up when it doesn't sound right first time. I do need to just calm down, go slowly and understand things will happen over time.  Im also getting a bit bogged down with music theory which feels like a foreign language at this point.

But I would highly recommend learning an instrument when your a bit older, keeps the brain young.

@SilverHalide :  I think I like the sound of the old bridge better. Doesn't seem quite so dark and muted.

Good playin, I certainly know what you mean about starting and stopping violin. I started at age 4 and played till I was 10, then my mom couldn't afford lesson's or violin rental any more. Now.......... you have to understand that was back in the 40's and early 50's, I'll be 72 in September. I had a lull period of about 57/58 years, so I just got back into it about 3 or 4 years ago.

Keep going with it, those are my thoughts on that. I could kick myself in the a$$ for not starting back sooner although I have always had a violin at my disposal,(is that the right word for having a violin I could play anytime for that period) so now I practice anywhere from 2 to 8 hours everyday.

You can do it too, maybe not that long practicing, but you can get back to playing.

Both the old bridge and new bridge versions of Ashokan sounded very good and quite similar to me - I can't really say that I would prefer one over the other. If you find the new one more stable, that alone is probably a good reason to keep the new one since it should then feel more comfortable for you.

@Fiddlestix Thanks for your opinion Ken. It feels like my fiiddle is less screechy now and I no longer have ringing ears which is always a bonus.

Good for you getting back at it, I know exactly how you feel.

There seems to be a certain mindset that people can be "too old" to learn a new hobby or skill or that it is too expensive to buy/rent a violin and get lessons. This is where the internet comes into its own and 'how to' videos and communities like this make it more accessable. Everyone should be encouraged if they have a notion of doing something. Good luck to you too.

@Fidelestre Thanks for your input. It feels a lot more comfortable to play at least.

Here is the Arran Boat song. Such a simple yet beautifully haunting. I cant wait to get to grips with it and start adding some ornamentation.

@Fiddlerman  talking, waffling, blethering take your pick! Haha. Also if I wanted to make a click track in a 4/4 signature, can I make it a series of 4 clicks going 1 2 3 4 ect or is there another way? Cheers.

That would work fine SilverHalide

by ear- two whole days (getting there)

(didn't look like the iframe thing was going to work, so I just put the link- have to figure that out some day)

Sounds good Leana but my only critique would be to use more bow.

I meant to update this thread ages ago but now I have some exciting news. I managed to blag my way into my university orchestra (no auditions thankfully) and we are playing our first show in November!

But since I havent seen a full score for goodness knows how long, can I pick your brain @Fiddlerman? I have no idea how you would play the bars starting from K and help would be much appreciated. 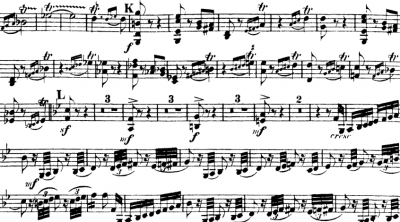 SilverHalide said
Sounds good Leana but my only critique would be to use more bow.

wow- at that point, 2 months ago, I only had the violin for one month !!  I notice when I'm unsure of the notes (clearly was the case here), I don't use the bow much.  I still play this almost every day, along with to others-  I like to think I'm getting better, and well….. for sure I am !

Thanks for the feedback, Silver !

SilverHalide, it depends on your leader (I would ask for divisi) but often you divide two and two with your stand partner. The top two notes played by the person to the right and the bottom two by the person on the left.
If you play all four notes you play them making a circle motion (little pressure - pressure - release) for a quick press over all four notes rather than breaking them into two groups because in this case the chord is a short one.
Do you have a different question about the part?

@Fiddlerman sorry! I hadn't realised you replied. Thanks for your input, I didn't know about the circle motion - need to practice that.

Quick update - I somehow manged to weasal my way into my university orchestra (no auditions thankfully) and we played our first show of the year tonight. It was excellent fun despite getting lost a couple of times and my violin slipping out of tune halfway during the set from the heat.

So now I really need to brush up on a lot of techniques buy my sight reading is becoming more fluent and shifting is getting much easier and I feel like it's really challenging me as a player which is always what you want.

I would highly recommend playing with others to help improve your skills.

Small update on the past few months, we played another wee show focusing on movie soundtracks in the old Law library, surrounded by oil portraits of important people of the university and glass stained windows. A fairly small room but quite grand in decor.

And it actually sold out! :O people were having to stand at the back.

So that is us done for the semster. (Boo) and the next one will be in November when I will be an old weary fourth year soon to be kicked out of uni. Sob.

Anyways. Didnt realise we were being filmed too, so here are the videos they got. Sound is a bit low but not too bad. The third one is the Chamber Choir who sang beautifully for half an hour. Its a shame they only filmed one song.

So now, I'm back playing for funsies to combat stress of writing essays and dissertation preperation and I treated myself to a new bow, which is much lighter and easier to control. It no longer feels like I'm having to wrestle it which is fantastic. I'm also going completely back to basics and working on posture, grip, positions and most importantly rhythm as I am terrible at keeping count on my own. Its so easy in a group! I've got a number of songs I want to work on including stuff from Les Mis and Lord of the Rings so hopefully I may be able to get some videos uploaded too. 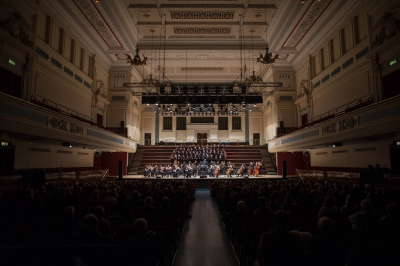 Took a break from essay writing today. Still nervous when I record myself haha - it shows! Laptop is back workin so hopefully get some videos done too. Fingers were sore and bow was a bit bouncy. I also need to replace my strings but hey ho, it's all good.