Why is it that everything sound's good until you record it ?

Well I liked it...kinda got your swing going there

I know the violin isn't the greatest, but how is the sound ?

I liked it too, fiddlestix! I like swing. I think your violin has a nice balanced warm sound.
wish mine was better. Needs new strings.

Well, the recording setup probably isn't the greatest.  I would bet that in person, that instrument sounds considerably better.  From what I could tell from the recording, it sounds rather warm and sweet.  A very pleasant tone, at least to my noob ears.  The sound quality of the recording itself isn't any worse than is common for most progress recordings here, though.

The musical interpretation?  Well, the piece was immediately recognizable.  I noticed nothing jarringly bad to the ear, including the transition labelled as bad.  I don't think an average listener would have noticed any flaws if they weren't pointed out.  If it had been played with even a small ensemble, I would say that few if any would think it anything other than professional level playing.  Some things I noted like your choice of where to use vibrato and doublestops, were an obvious departure from a simple duplication of the vocal melody and stylistics.   But I felt they worked well and were effective.  You got more of the feel than I expected from doing the piece with a single instrument.

If you are asking about your playing itself.. I have been playing a whole 4 months, and don't much expect my own playing to sound like much but crap for probably another 8 months or so.  So what would be the value of that sort of critique from me on execution/form/etc?  As such, I will refrain from saying more than "Sounds better than what I have managed so far." and leave it at that.

Overall, I would say it was an enjoyable rendition of a great old song.

Thank's,  for the positive comment's.... I was concerned mainly in the sound of the violin. I bought it about 7 year's ago, for $90.00,,, Chinese violin, not sure who I bought it through though. I was about to dismantle it and use the neck for a cigar box fiddle, the thing sounded really awfull.

I've cut a new sound post for it, new string's and moved the bridge around till I got what I thought is a decent sound. I've been playing the Chinese violin more now than my 130 year old " Caspar daSalo". The bridge now is actually 3cm or 30mm behind the nick's in the F hole's. It has to be there in order to arive at 328mm, I even tried 324mm. When the bridge was aligned with the F hole nick's I was getting a really loud ringing sound when I played a E note on the D string and a B note on the A string. Moving the sound post a little closer to the bridge eliminated the loud obtrusive sound.

A few week's ago when I played one violin and them picked up the other and played it, in tune and first position, I was getting off key note's. They didn't play the same, one was in tune and the other was  a little sharp or flat, can't remember. Made it hard to play in position and be in tune.

Incidentally,,, Zyex on both instrument's.

Anyway,,, thanks for the nice comment's.

BTW,,, there were no violin's in the Jimmy Dorsey orchestra.  That's the style of music I like to play..

Well I thought it was smashing good!  Got my foot tapping and I like that "band" sound myself. Bravo and thanks for entertaining us!

Holy Smoke Ken! You play fantastic... and from memory too!!!

Want to know how that violin sounds and "looks" on paper now that you've spent all that time and effort in the tuneup? I was really impressed with the sound...you've got a keeper in my very limited and unprofessional opinion.

I loved the sound...and with Zyex strings too! I should've known...so smooth and warm sounding. 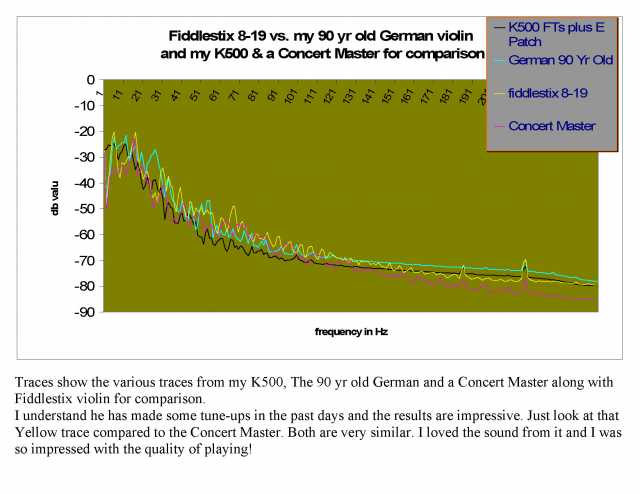 Thank you Toni and thank you Dennis for the nice comment's. Although Dennis, you did a sound trace test, I really don't know what all the line's mean, LOL. I see the line's at the end of your German and K-500 have smoothed out, are those open played string's ? I can't tell because I know nothing about reading the graph. I adjusted everything until it sounded good to my ear.

You did the sound trace while I was playing a song, does that matter or is it best to play open string ?

"The bridge now is actually 3cm or 30mm behind the nick's in the F hole's. It has to be there in order to arive at 328mm"

RosinedUp said
"The bridge now is actually 3cm or 30mm behind the nick's in the F hole's. It has to be there in order to arive at 328mm"

Sounds pretty good, good flow and a bit of swing too.

As for the fiddle, maybe you could sweeten it up with a set of Corelli Crystal strings ... they do tend to mellow out a budget / harsh sounding instrument

I think that the Chinese manufacturers, in particular, maybe sometimes don't understand that the nicks aren't just there for looks.  The violin looks full-size on the video, and it has a nice warm sound in the lower ranges that I would be surprised to hear from something like a 1/2 or 3/4.

My Chinese made acoustic, the nicks aren't as far off as 30 cm, but at least several mm.  I figured out I needed to just ignore them and go by the measure of the string length.

But back to Fiddlestick's violin, I really like the sound of it.  From a listener perspective, it is a very pleasant sounding instrument and I very much doubt anyone would ever guess what it cost from the sound.

Actually, on the label inside the violin it say's, "Vanetto", by Italian Engineering, so I'm not sure if it's Chinese or what. I just call it my Chinese violin due to the cost of it.

Happy birthday Fiddlestix!  Here is yours

Fiddlestix, yes the Corelli Crytals are cheap. I only mentioned them because someone had a very basic Stentor violin which sounded harsh (I can't remember what it was strung with), but the Crystals sweetened it up.

If you are happy with Zyex, then fine

RosinedUp said
"The bridge now is actually 3cm or 30mm behind the nick's in the F hole's. It has to be there in order to arive at 328mm"

Gosh, can you first please tell me what is your point in mentioning that your fiddle seems to be 30 mm shorter than it is supposed to be?  Then I can do my best to answer without upsetting you.

What I said is, in order for me to get the 328mm string playing length, I had to move the bridge back behind the nitche's which put's it 3cm or 30mm behind the nitch in the F holes.