Knowing the scales for all keys and modes, part 2

Knowing the scales for all keys and modes, part 2
Using your scale computer

Here I show how to use a homemade computer to compute any of the diatonic scales.  Instructions for building such a computer can be found at https://fiddlerman.com/forum/s.....-any-mode/

The best known of the diatonic scales are the usual major and minor scales.  Every major scale follows the same pattern of whole and half steps to climb an octave.  The minor scales (meaning the natural minor scales) have their own pattern too, distinct from, but related to, that of the major scales.  Major and minor are called modes, and there are five other modes---seven modes in all.  The general concept of mode includes the concept of relative major/relative minor.

The first photo shows how the computer is set for computing any of the seven scales of the C-Major key signature.  "Ionian (Major)" on the inner disk is aligned with "C" of the outer disk.  The sequence of notes of the C-Major scale are read clockwise as the seven pitches aligned with the marks on the inner wheel.  Starting at the mark for "Ionian (Major)", you would read: C D E F G A B.  Staying with the same setting, the sequence for the A-minor scale is read starting at "Aeolian (minor)" and going clockwise: A B C D E F G.  Again with the same setting, the D-Dorian scale is read as D E F G A B C, and the G-Mixolydian as G A B C D E F. 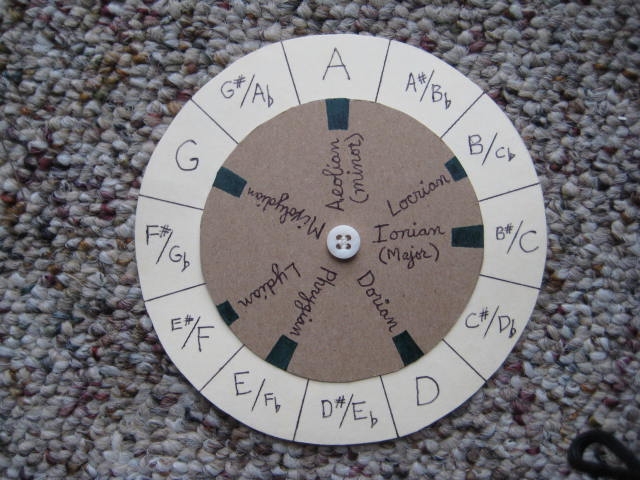 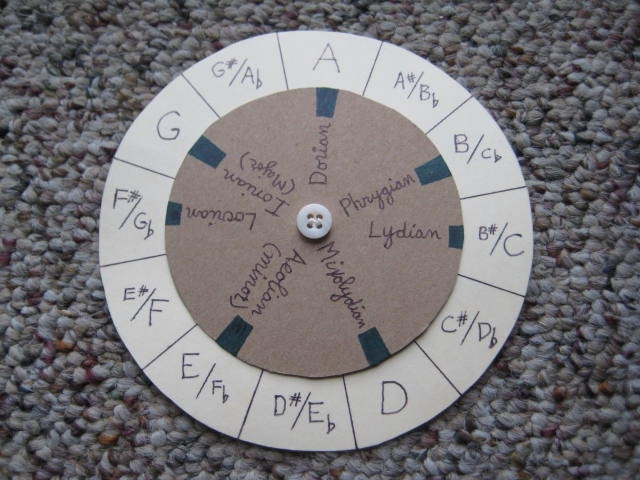 Suppose you want to find a specific scale, say C-Minor.  You would align the name of the scale's tonic, "C", with the name of the mode, "minor".  Then you would read the names of the pitches aligned with the marks, starting with the tonic: C D Eb F G Ab Bb.  C-minor is a mode of the key of Eb.  Other modes of Eb include Bb-Mixolydian and F-Dorian. 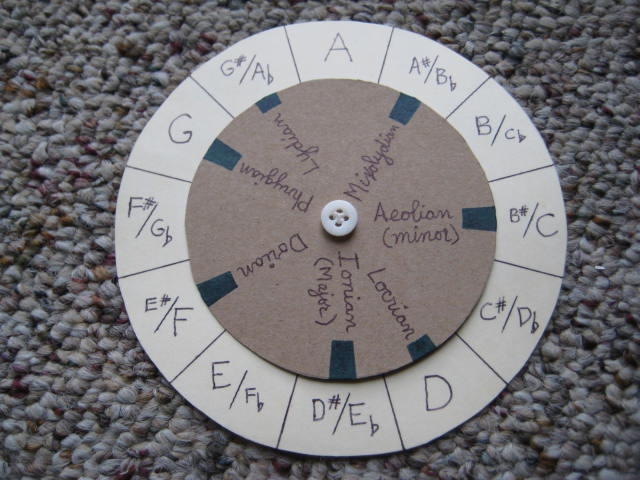 This is the one I made: 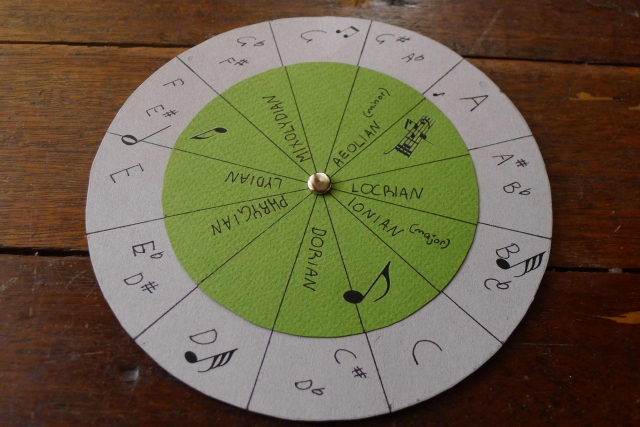 Thanks RU for putting this up for us. I will be trying to learn how to use it now that I've made it!

@RosinedUp - Now that's the kind of computational device I like ! ( But where's the circuit board and PSU ?

@Kiara - I see we have the computer set up for BMaj - that's a semitone too high for practicing the Holst Thaxted piece !!!

Nicely done RU with a fine explanation in the text - and I was wondering where my missing shirt-button had gone....

LOL.. catch you both in chat sometime! - EDIT - I have caught you on chat - you two are as bad as me - do you ever leave? LOL

@Kiara I think you've found that it's good for building chords too. I'm happy to see that you made it and are getting some use out of it.

MadBill said
@RosinedUp - Now that's the kind of computational device I like ! ( But where's the circuit board and PSU ?

You could make a very durable version by using circuit-board material.

MadBill said
Nicely done RU with a fine explanation in the text - and I was wondering where my missing shirt-button had gone....

I wasn't as clever as those who used a paper fastener ("brad") for the center pivot. That indicates the power of a community.