In this topic I'll put some Polish sheet music. Hope you'll enjoy it

This one is not a folk song, it's a theme from movie "Bandyta". It's pretty hard to find sheet music for this, so I put here a piece for a flute (made by Michał Świątczak). You can listen to an original tune here (composed by Michał Lorenc): 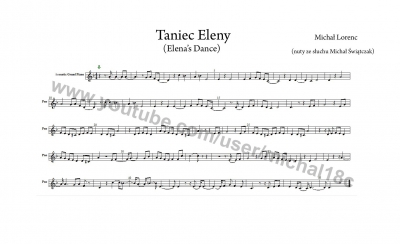 Here is a Polish carol, "Jezus Malusieńki" - IMO one of the best. In English "Tiny Jesus"

This one isn't very complicated. Title says "And in brewery...", and song tells a story about a guy named Maciek who is jumping around like crazy 'cause he ate a easter cake.

This one, called "Góralu, czy ci nie żal" (Highlander, aren't you sad) was composed to a poem written by Michał Bałucki when he were in prison. He shared a cell with a highlander who were pining for his home and mountains he left behind. He inspired him to write this.

And this one is such a huge part of Polish culture, that it can be actually called a folk song

It's a song from a soundtrack of a TV series "Czterej Pacerni i Pies" (Four tank men and a dog). Title says "Rains Restless" (I don't know if I translated it right)

I have a whole book for anyone interested. It's too big to put here, but I cand send it via e-mail

Learning the violin since April 2016

Ah yeah, these look challenging to a newbie like me lol

But I enjoy a good challenge... thanks for posting!

"I know that the most joy in my life has come to me from my violin."

Maybe you should drink/eat something polish before playing

Here are some example videos to songs:

Deszcze niespokojne - I haven't found any good violin cover, but this is an original song

Learning the violin since April 2016

Hi Marta, thanks a lot!

I have recently learned to play Aleksandra from the movie Moskva slezam ne verit. I went through a heck of a time to try to find the tune, in Russian, and I didn't succeed. Luckily, my teacher studied at conservatory in St. Petersburg and speak a bit Russian, so he eventually succeeded but only after he had been through some very dubious websites, haha!

Although it is Russian, I just wanted to stress that I love East and Central Europe, and it I believe it is really hard to find the sheet music for the folk tunes which I like. So I'm really happy that you posted this