Looking at a Gliga with a darkened Antique finish. How is this style finish regarded in the violin world? I personally like the look, as a lot of the other models seem to have a very light honey color? Thoughts?

@tamer Hi, Thank you for joining the forum. You question is a bit vague. I think what is more important than the aesthetics, is the playability and sound.

Maybe you could provide us with more information about the instrument in question?

I would also, given the vagueness of the question, suggest you maybe go to the Introduce Yourself section and provide an introduction. We will be able to know more about you and your abilities, and desires in playing to assist you on considering this instrument. Going by aesthetics alone when thinking about an instrument is really not the way to do it.

In the end, the decision will be yours, but with more information, we might be able to offer more for you to consider.

We look forward to learning more about you and the instrument you are considering.

Edited to be more clear.

Don't let the pictures fool you they use a lighting to get the figure of the wood to show through better its not used to trick the customer its used to show how pretty the wood is in simpler words.

With that said I think you could do better with a fiddler man violin just due to the fact that even though some people promise a professional set up it does not mean that is what your going to get like tuning pegs that actually work smoothly and a properly finished bridge.

Neither of these will you get with a Gliga,or at least this was the case with the one I own the bridge is better than what you would expect from some Amazon or Ebay purchase but not much better in my opinion, the action of the tuning pegs is poor and the sound is not that good either,on the other hand the string spread is decent.

But I found one that I bought about three or four years ago that is my main instrument now that is a long story but I had figured I would be sending it back to the seller and eating the price of return shipping it actually came with a case which my Gliga did not it cost a lot less than my Gliga as well.

They are both strads but the set up was night and day with the cheaper of the two being done quite professionally as apposed to the Gliga.

But as I mentioned in the begging here don't let the pictures fool you mine looked lighter in color in the listing but is much darker in person.

I can't tell you what to buy but I would certainly say that I would be more concerned with playability and sound which you would be able to inspect by having fiddlerman do a video for you and along with that I think you could get a choice of instruments in the same price range and model with fiddlerman.

Just my two cents worth. 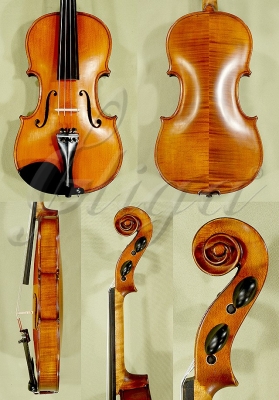