Do you think an upgrade makes sense?

Do you think an upgrade makes sense?

I just got my new Fiddlerman Artist violin yesterday to go with my Concert violin. 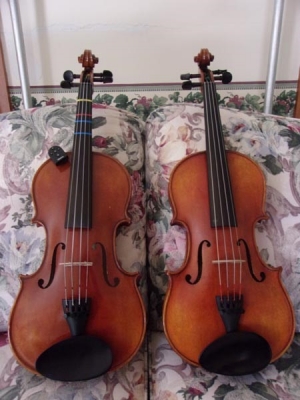 Congratulations to your new violin. I hope you have a lot of fun with it!

@Fiddlerman May I ask how it came to this? Were there too large differences in the quality? Or have they just become "obsolete" as you offer your own Fiddlerman-violins and the Holstein-violins now?

By the way: Today I received a message from the shop. He shipped te violins today, three of them are from Simon Joszeph, one is from Vultur Calin. I am really excited because up until now I myself dont know which violins will be sent to me, as I just gave him my description so that he could pick some fitting violins out. They all are between 1200 to 1500 Euro.

At the moment I am dealing with the next "problem": I really dont want to carry such an expensive violin in my cheap stentor case because I fear that it offers only little protection. I have to move my violin round about 2 times a week because at the weekend I am at home while I am in a different city the rest of the week.. My absolute favorite case would be a Gewa Air but at the moment I cant afford it so I am currently looking for a cheaper case with at least "ok" protection for round about 100 Euro. I am considering to get a Gewa Bio Case, Concertino Case or a Jakob Winter 1015 Case, as they seem to at least offer better protection than my Stentor-case..

I received the violins on the 22nd October and spent the last few days mostly with playing them (I was at home this week so I had enough time for that). Right in the moment I opened the case with the violins inside, one of them immediately draged my attention. It was one of the Simon Joszeph violins, priced with 1450 Euro and built in 2018. It has a golden oil varnish, a nice flamed back and looks really well made. I tried this one as the first one and fell in love with the violin immediately. The tone seemed alive and was so warm and full. When I played different dynamics I was really impressed by the forte, because no other violin I tried up until now had such a nice yet still incredibly powerful forte.

Still I gave the other violins a try, played them for some time and again I did a blindtest: I played the violins to my entire family and each of my familymembers had a paper on which they should write the number of their favourite violin. Of course I did not tell them which one I prefered. Everybody agreed that the violin I allready perefered was the best, yet my father and my sister found it as good as another violin from Simon Joszeph and could not decide between the two.

But as I just described, I allready lost my heart to one of the violins and so I sticked with it because I found it sounded a bit richer than the other Simon Joszeph. The only thing I am not  completely satisfied with are the strings. They are Larsen Il Cannone which have a good and strong sound but I found it hard to get a good piano out of this strings because they are not that responsive (at least in my case). But thats not a huge drawback to me because I wanted to try out some gut strings for quite a while now and so I will just replace them with Pirastro Passione strings because I think they would suit this violin quite well.

Congratulations! I am positive you will enjoy it.

Quite the experience on finding a new violin, grats on finding one and thanks for letting us come along on your process of finding one.