I find I'm having to practice a lot with a heavy mute and it's still not quite quiet enough for my needs at times. Heavy mutes heavily distort the tone and the instrument plays noticeably different as well. I'm sure constant heavy mute use isn't the best for the instrument nor is it the most convenient.

It has me left pondering if a budget solid bodied electric may be the best solution. I would still practice with the "acoustic" while I can but a lot of practice during otherwise inopportune times would be done on this electric with headphones. The idea here is that this would greatly increase my practice times and make them more productive to transfer to the acoustic.

I'm aware that electrics do sound and play a bit differently as any electric solid bodied instrument will compared to its purely acoustic counterpart. Still, I imagine that the tone and playability would be more true to the acoustic than the heavy mute solution

I'm wondering if anyone else has gone this route or what their thoughts are.

@Amateur and others.  I do it all the time.  I use a cheap Cecilio solid body electric.  Over the year I have upgraded the pegs to Knilling, a Wittner Isny shoulder rest and a 3/4 size tail piece, but none of that was needed.

The main point is that the string length needs to match your acoustic to prevent intonation issues.  Be careful to mimic the curve of the bridge of your acoustic as well.

I have just started to branch out to the cello, and thus far I am only using a solid body electric.  Again, I swapped pegs to Knilling and it has an akusticus tailpiece.

You do not need head phones or an amp. Just the electric violin. And the Cecilio would be the cheapest to get. The other cheapies are around $60 but are made with basswood and the neck won't hold well because of how it is put together. They are not worth the bother. Cecilio will work well for you. You can hear everything you need to hear just with the strings for daily practice. For concert practice you will need your violin.

Mack has a Cecilio and it’s just fine

Hello @MrYikes.  It has been a long time since I have seen a post from you here.  Those opera cello strings you gave me are awesome.  Thank you again.

Regarding the Cecilio electric solid body violin.  In my opinion, the one to get is the yellow (natural color varnish) since they need to be better made because the painted ones tend to hide a lot of bondo.  Plan on immediately replacing the strings that come with it.  Likewise the bow.  Second hand works because there is a not to go wrong with them.

Surprised to hear such glowing reviews of the Cecilio. I started with one of those cheap painted acoustics from them. The bridge and nut were too high but it stayed in tune and was functional. I still have it though I'll never plan on playing it again. Not sure what to do with it.

For the electric I was thinking of something about twice the price of the Cecilio. I suppose I didn't specify. I meant something below the "real" budget electrics like the Yamaha YEV or the NS WAV. I'm thinking of ordering from a place that does a setup. I already have a good idea of the options available. I wish I could order the violin without the outfits but you have to buy the package at this price range.

Though I know one can hear the strings, I still want to hear it through headphones to get the full sound(since it's there, why not?). I do have an amp too. The objective here is to get more practice time. The acoustic will still get plenty of use.

I'll be replacing the strings with synthetics. All of these violins I'm looking at have piezo pickups and on-board preamps so there's no need to be stuck with steels. Besides, I use synthetics on my acoustic and I'm trying to keep them as equal as I can.

@Irv Those electric cellos look very tempting. A solid body would do away with my apprehensions regarding keeping and maintaining a cello. I'd be very tempted to rig one up as a 'cello da spalla if they made them in fractional sizes.

Playing steel core strings is rather standard for electrics.  But I am sure that synthetics should work as well.

I know the Cecilio solid body violin comes in various sizes.  Not sure about their cello.  A second hand violin one at $40 is hard to beat.  Their cello version does not ship well and you might want some sort of buyer protection on it.

I came to this same conclusion, but for a different reason. I am retired, but my wife still works to support me in a lifestyle that I would like to become accustomed to, and she works at night. That, of course means that ahe sleeps during the day, so if I want to practice during the day, I need to do it silently or at least at a greatly reduced volume. I like to do my daytime practicing on the back porch, with the electric unplugged, in two shorter periods, 30 minutes to an hour each separated by several hours. I think that I progress more rapidly that way rather than slogging through long torturous sessions. 10

I admit that I do not use it much, but I did purchase a Yamaha THR5 amp that works on my Yamaha silent guitar (modified for use as a tenor guitar), solid body violin and, now, my solid body silent cello.  If you go this route, by all means spring the extra $20 and get the cloth case for it.  Very well made and perfect for the coffee shop gig and playing via batteries on the beach. 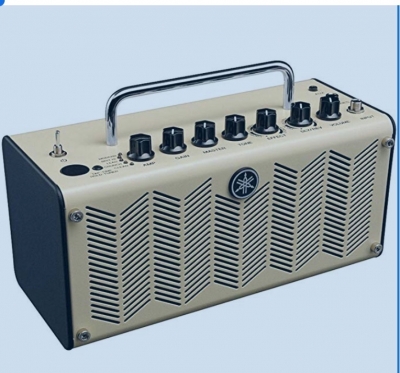 I agree that the Cecilio silent electric violin is find for practice but you may need some adjustments. The set ups leave a lot to be desired.

I've gone and done the opposite of what was recommended here. I got a 5 stringer. A Yamaha YEV-105 to be exact. I was torn between the 4 and 5 string but I eventually dream of getting a 5 string viola and wanted to get acquainted with the C string. I also got to try a viola. More comfortable and less cramped that a violin. Much better proportioned. But alas, I was there to get something quieter.

I was amazed by its natural, rich and powerful tone. I'm really liking the flatter nature of the 5 string bridge. Now I want a flatter bridge for my acoustic. Its tone is also better than my acoustic. It feels a bit heavier than an acoustic but balances better.

It's quickly become my main fiddle though it's nowhere near as hard switching between the two as some make it out to be. The string spacing only feels minimally tighter which hasn't been an issue for me yet, even with rapid string crossing. It also makes up for this with the more ergonomic wider neck and the tighter bowing angles.

I also see what all the rage is with the Zyex strings(came equipped with them). Best synthetics I've played yet. Manages to be warm while having the power and responsiveness I don't usually associate with synthetics. They seem to bridge the gap with the trade-offs between synthetics and steels.

In short, the YEV can be as quiet as I wanted for practice but it really delivers everything I could want in a fiddle.