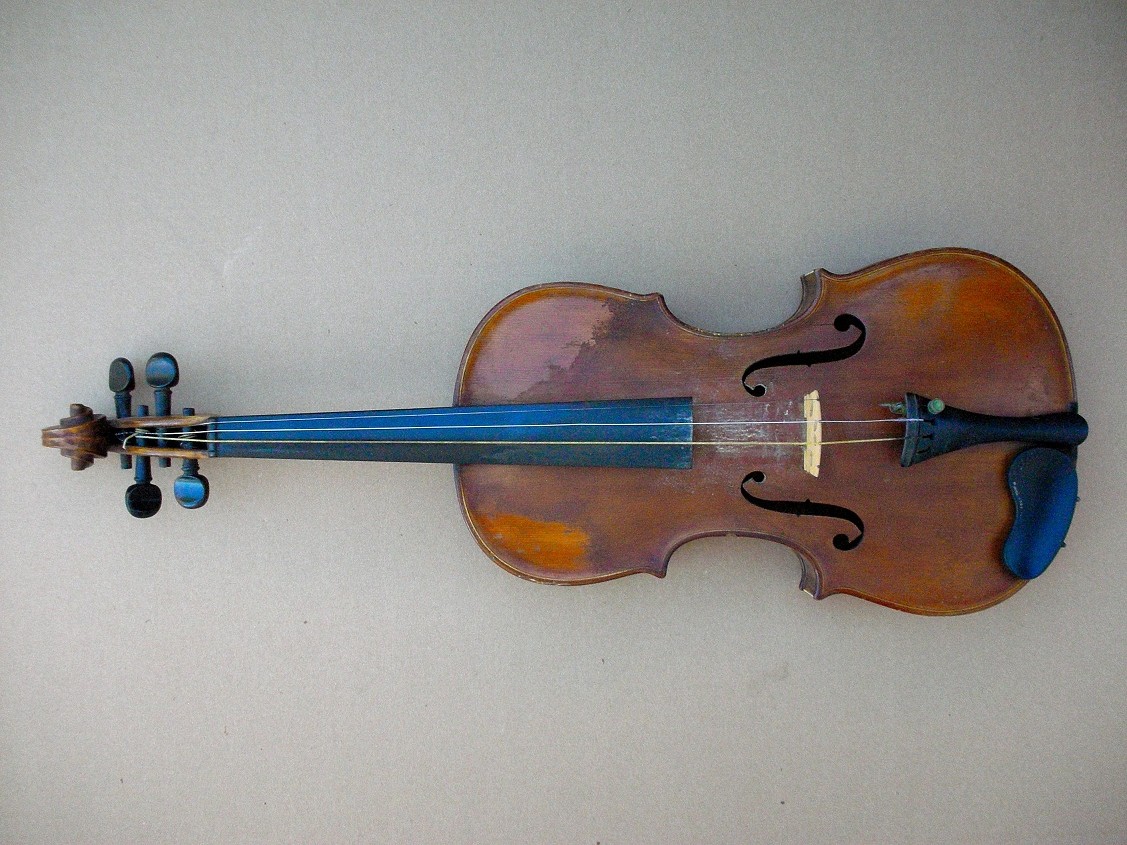 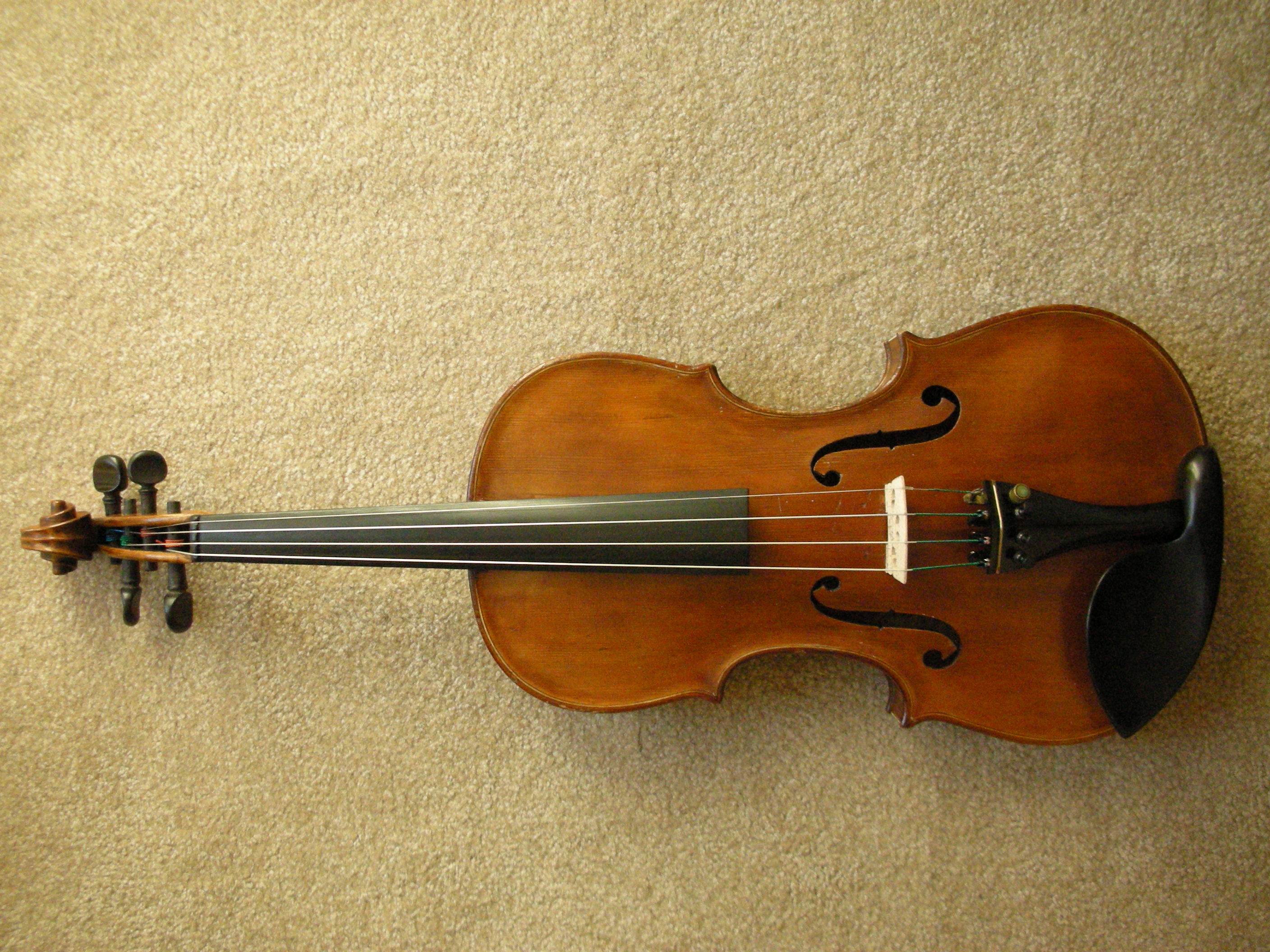 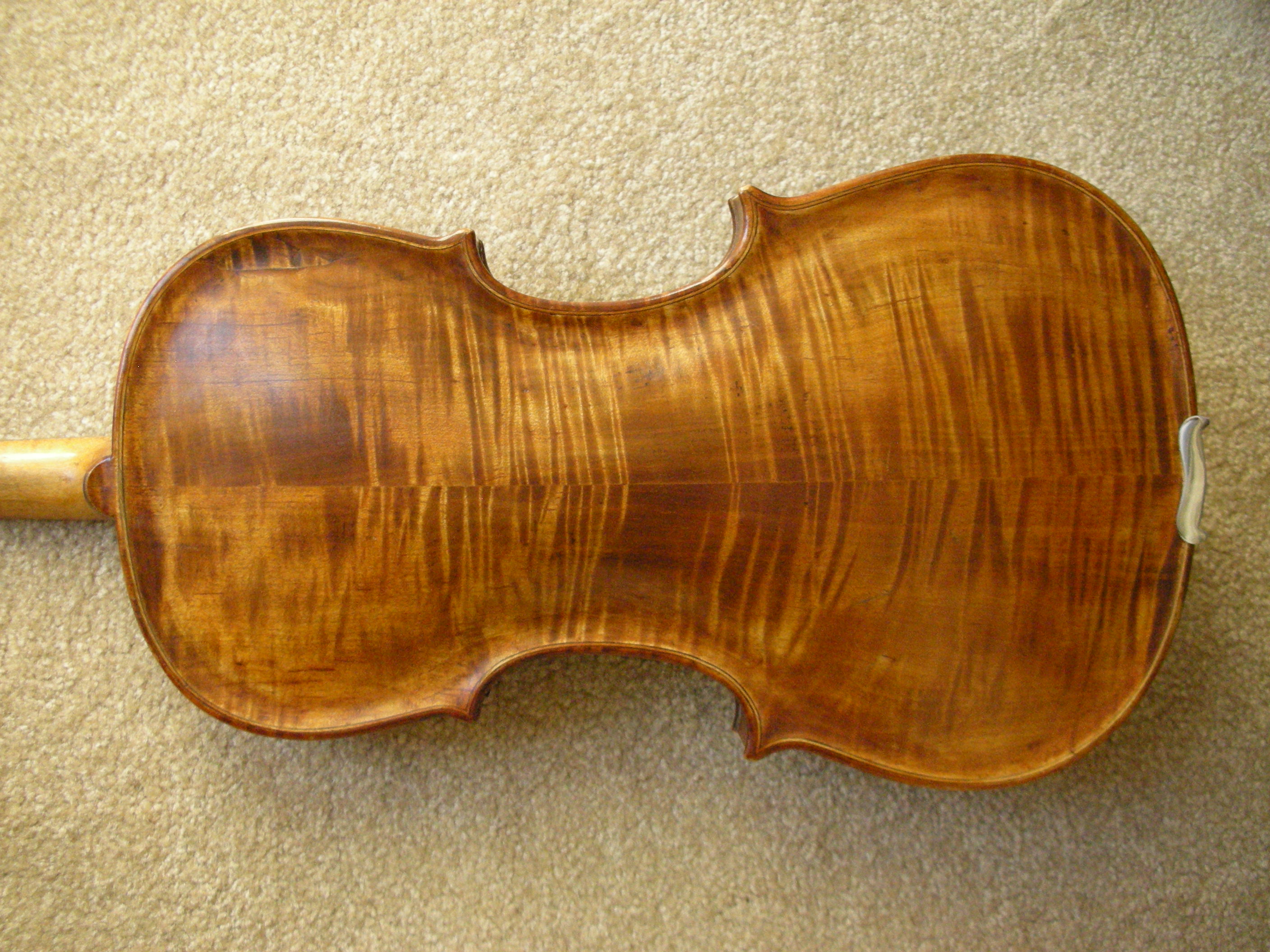 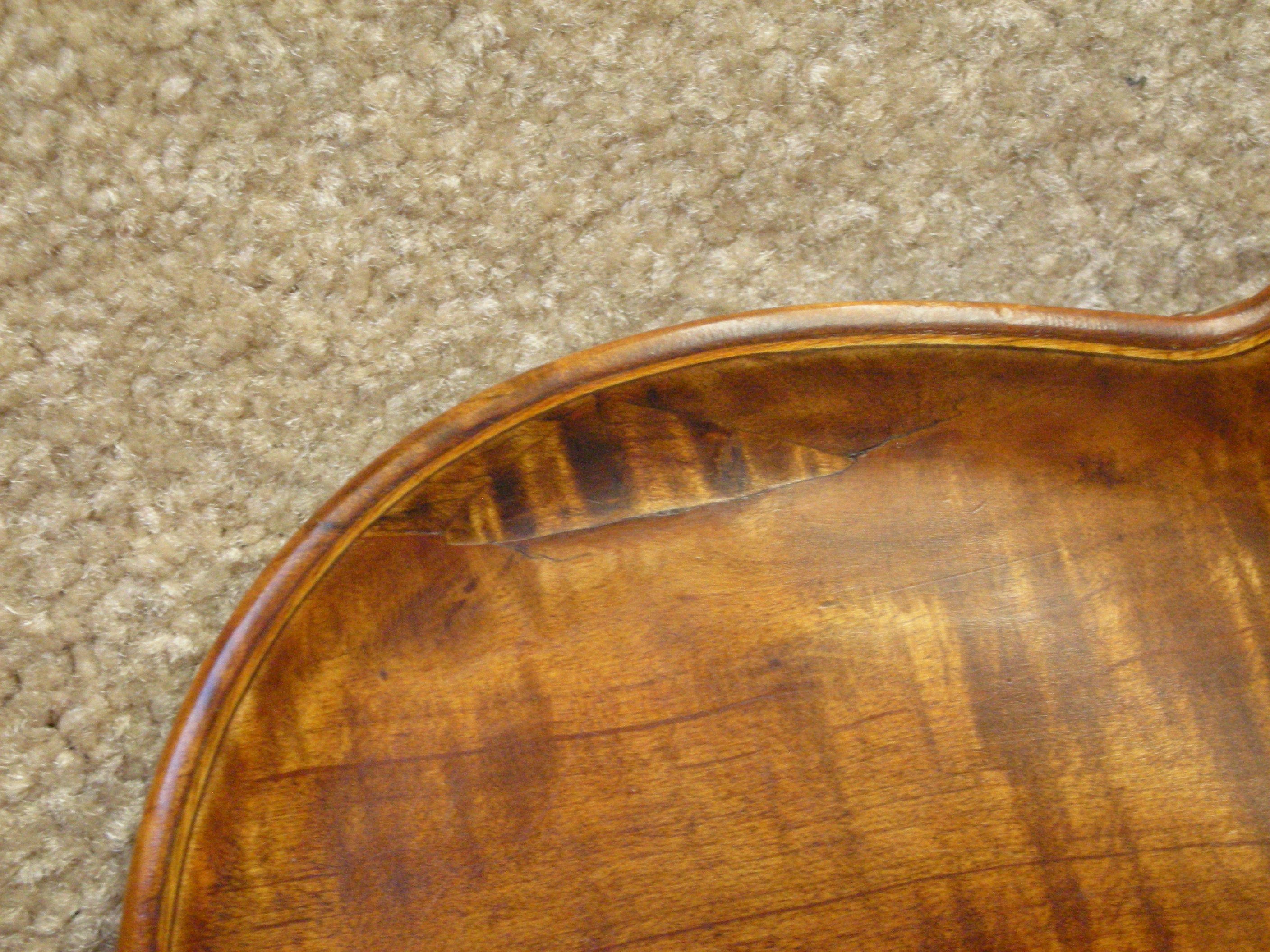 Some of you may have seen this fiddle on the other fiddle forum. (the much less friendly forum I posted it on before I found this much more friendly one)

The last weekend of every February, at San Diego's Qualcom Stadium, (the giant concrete stadium where the San Diego Chargers play) the 'Big 3' swap meet takes place. The Big 3 swap meet is primarily 'geared' toward antique cars and their associated stuffs but all manner of other interesting objects can be found there and collectors of every stripe will scour this swap meet for the objects of their desires. These swap meets are huge and draw hundreds of sellers and thousands of buyers. I keep up a brisk pace and it took me 3 full hours to get through it all.

At the two and one half hour mark I came across a a guy selling intake manifolds. Among the manifolds laying on the asphalt was a violin in one of those zipper cases which usually contain cheap knockoff 'student' violins with painted on purfling. The case had a piece of masking tape with "$110" Sharpied on it. I zero'ed in on it and asked permission to handle it. "Know anything about violins?" the guy asked. "Not much", I lied.

The top was nearly covered in caked on rosin residue. The back was stunning. It had beautiful woods and was solid and intact. The label on the inside was printed "Made by Jos. Geiger Falls City, Neb" with "Mar. 20, 1901"  handwritten in ink. I asked the guy if the price was negotiable and he said, "Make me an offer". I offered him "80 bucks" and he came back with "It's yours".

The moment this fiddle came into my life, it immediately became my most prized possession. Indeed, I am obsessed with it. I gleefully paid him the 80 bucks. What I couldn't figure out was how it had not been snatched up before I stumbled on to it. The swap meet had been open for hours and yet it seemed by this seller's reaction that I was the first person to show any interest in it.

Attached are photos of it before and after. I will continue this dissertation and explain some of its unusual features later as now it is off to my regular Sunday morning swap meet.

Jay Stanley said
Some of you may have seen this fiddle on the other fiddle forum. (the much less friendly forum I posted it on before I found this much more friendly one)

We have the friendly forum. That is what I love about you guys.

Thanks for the nice pictures. Beautiful fiddle with fantastic flames. Look forward to hearing it sometime.

It is now a 'hunted' violin and beautiful.  Let the music ooze from it.

What a great job on the patch someone did.  People don't put the money into fixing cheap violins as I'm sure that repair wasn't cheap.  I love the bookmatching of the flame and the detail of the corners onf the c bouts.

I love beautiful wood and violins, the back on your violin is fantastic.

I do wonder tho if the distance between the bridge and the tailpiece should be greater, to help the sound.

I theorize that the patch on the back was put in by the maker. The purfling looks to be unmolested and the patch seams run under it. Also interesting are the ivory inlays on the 'beaks'. A member of another forum speculated that they might have been added to mask bad miters. What ever the reasoning behind them, I like them. More later...

OMG Jay! I live near Falls City [on the Kansas side]!!!! That fiddle is too cool, it resembles mine a bit.

Happy fiddling, it should bring you much joy.

It is gorgeous. Congrats and a double Yee Haw!

Yes indeedy! Soon after bringing it home I began my research about Jos. Geiger, Falls City, Neb. and other towns associated with his name and his violins. I came up with some puzzling results. For example, I have seen references to violins which carry the Jos. Geiger label but hail from other cities during a time frame which other evidence would indicate that he was still living in Falls City. (a Jos. Geiger violin from Canton, Ohio dating to 1902 and a reference to him and his violin making in the Falls City Gazette dated 1904) I suppose there may have been another Jos. Geiger's who made violins or maybe a dozen other Jos. Geigers.

I sent a query to the Richardson County Historical Society (Falls City is the County Seat of Richardson County) to see if they could come up with any data on his possible residency there. I have not heard from them, as yet. I have found references to 5 other Jos. Geigers which are either from Canton, Ohio or St. Joseph, Missouri but none from Falls City.

I have seen photos of a later 1908 Geiger which shares some common characteristics to my earlier fiddle. Similar varnish color, purfling very close to edges and a thin-ish fingerboard. The 1908 looks to be much more refined in execution than my 1901 which is very rustic and a little rough in comparison.

My San Diego violin expert/dealer/repairman buddy took a look at it and said, "Nice fiddle". He went on to explain why he described it as a 'fiddle' instead of a violin. He got out his 'neckometer' and demonstrated that the dimensions (distance from nut to optimum bridge placement) were a little off and told me that classical players would not go for it because of this but that folk fiddlers wouldn't care a hoot that it was a little off. All of this merely strengthened my resolve to keep it and learn how to play.

I have no intention of learning how to read music ever. I am a dyed in the wool 'by ear' guy and so this fiddle's imperfections have a deep pull on me.

All this being said, my 1901 Jos. Geiger has become an obsession. It has a wholly (Holy too!) rich dark powerful tone and it upsets me to be away from it for any length of time. Its sound is truly haunting and it resonates deep into my guts. Am I a little 'off' and over the top about this instrument? I would not argue the point. After all, it's only a fiddle one might say. But I know it's more than just a fiddle. I veiw it as a true American Classic and folk art of the highest magnitude.

When I develop a few chops and incorporate them into my amateurish homemade western songs, I will post them.

Thanks for enduring my lengthy discourse all who have made it this far.

I am wondering now if my fiddle may not also be a Jos. Geiger - it has no label, and my grandma bought it at a "hock shop" in Topeka. It is definitely within the realm of possibility.

I know this is an old post, but came across it while trying to assess current values for my instruments.

I own the December 25, 1908 Jos. Geiger violin that you probably came across in your search.  Mine was made in Canton, Ohio.  It is a beautiful instrument with a rich sound.  Does look very similar to yours.  It was previously owned by a fiddle player.  I did have a new bridge cut for it so I could learn classical.  I think about it often, but haven't played for a few years.  Brought it out today and started playing again.  Perhaps it will no longer haunt me.

Anyways, just curious if you have kept up with your playing and if you still have your violin.