I recently acquired this great-sounding instrument, and I'm trying to roughly identify its date and/or origin.  Any insights?

I'm expecting this to be some sort of German trade copy.  Any ideas, insights, or experts able to point me to some resources? 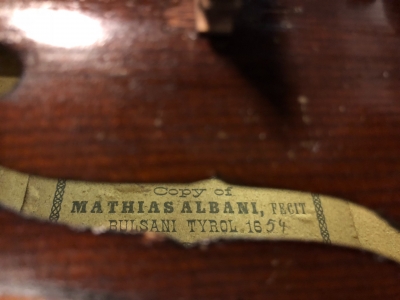 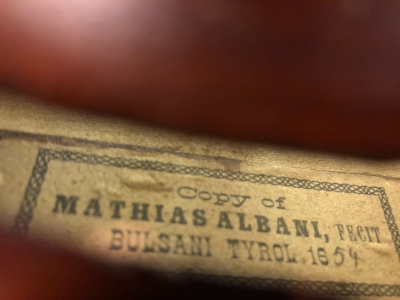 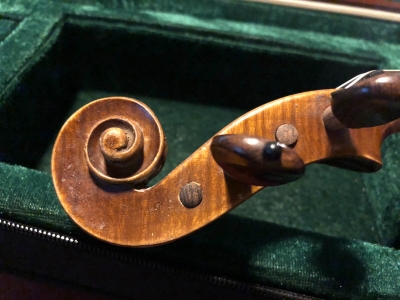 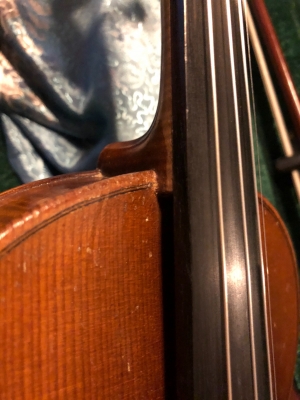 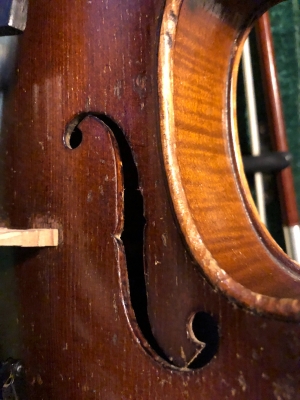 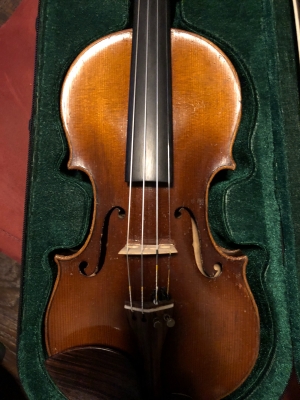 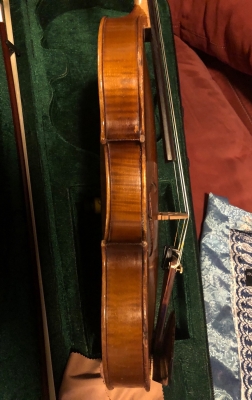 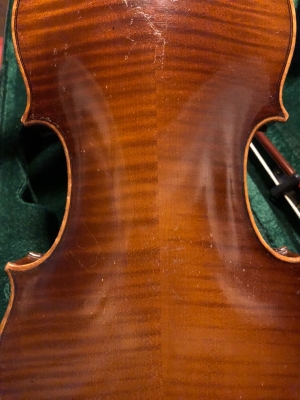 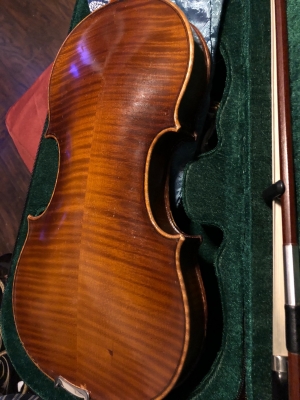 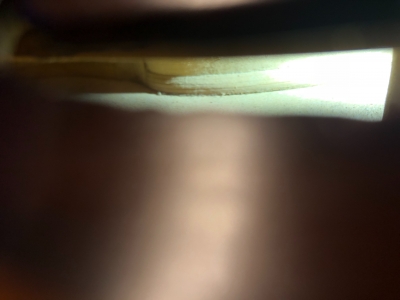 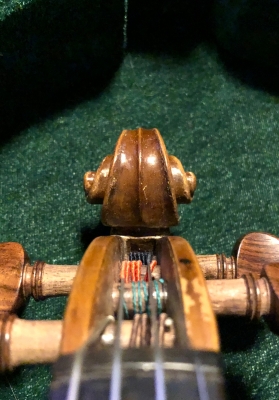 I'm not sure about it being some random German trade copy, though I'm not an expert. But according to the internet the German trade copies of his violins mostly had fake labels, trying to resemble the original. This one clearly states that it's a copy and the only reason the last 2 digits are handwritten is because the Albani in question lived only within that century so he couldn't have made anything at a date starting with 15 or 17, which obviously made them be able to print the first 2 digits on all the labels.

Now I see mentions of him making a violin in 1654, but that's all I found.. 'mentions' of it.. so it's not like that particular violin was one of the more famous ones (for one I haven't seen anyone refer to it by a name, like most famous instruments people tend to copy), which makes me wonder why would anyone copy that particular instrument, unless he has seen it in person.

Also the wood appears to be pretty decent quality.. so I highly doubt this was some mass-produced 'cheap' violin.. looks more like a bench-made or a high end production violin of some small workshop. The pictures don't have enough detail to be certain, but the purfling looks to be drawn on rather than inlayed.. (I think I can see some shades of the grain passing on to the middle of the purfling and I couldn't see any separate grains of the purfling and in some places it also looks like the ink has some feathering... ) still not sure, since the pictures aren't that high detail. But that doesn't matter much, since if it's a copy and the original maker didn't inlay them, it makes sense to copy it like that

Based on the general appearance I'd say it's probably no more than 100 - 150 years old.

Anyway.. none of this is really relevant as I'm just guessing here.. mainly trying to train my observation skills

so I could be totally wrong on all of these points..

What you could try is shine a light inside of it or maybe even use a small mirror with a handle if you have one that fits through the F-holes and try to look for a second label in all sort of weird angle... Usually copies might have a second label belonging to the actual maker / factory / etc..

Thanks!  Interesting notes about the labels on German trade instruments.  Likewise, I was also able to find only a brief mention of a 1654 instrument by Albani in an old late-19th century publication, and nothing else. Needless to say, even the luthier from whom I bought this was a bit confused.

Apologies for the nighttime pictures with lower quality.  I've attached some daytime photos here.  I've also been wondering about the purfling, and whether it's inlaid or some faux ink. It's hard to tell, so I've provided more details of the purfling here.

I've taken a look inside today (it took quite some maneuvering), and wasn't able to find any other labels or markings.  Just the ticket in the original post. 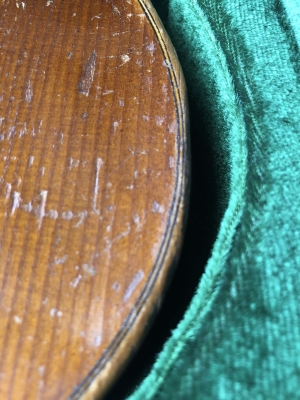 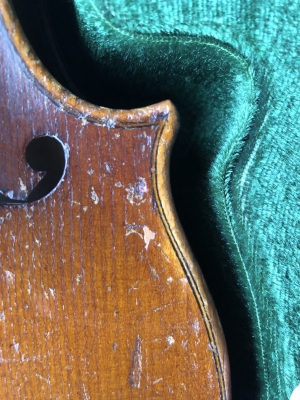 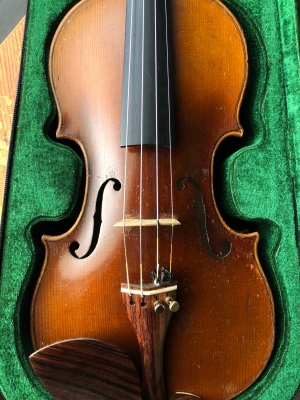 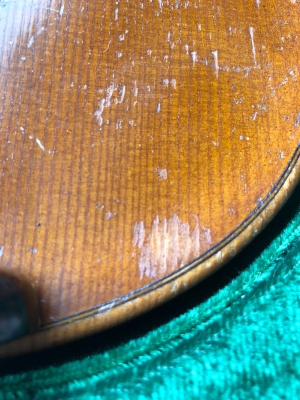 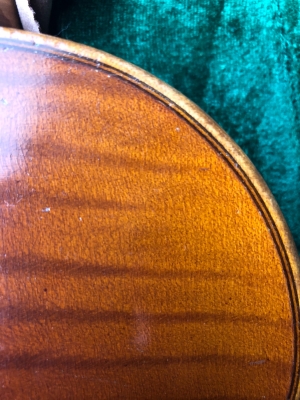 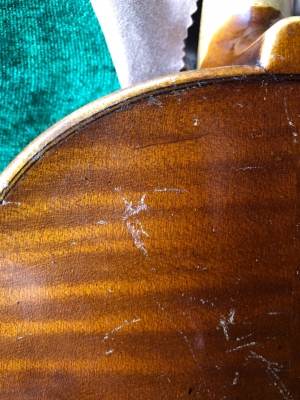 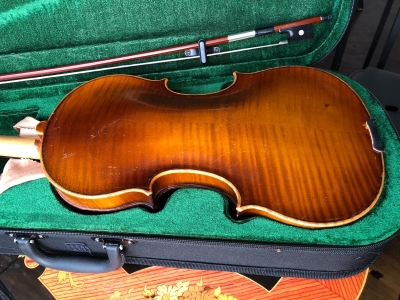 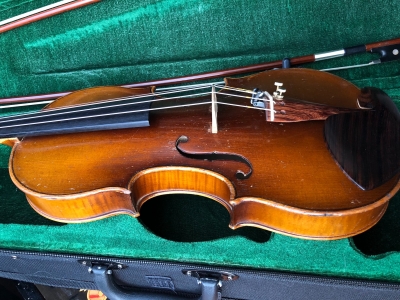 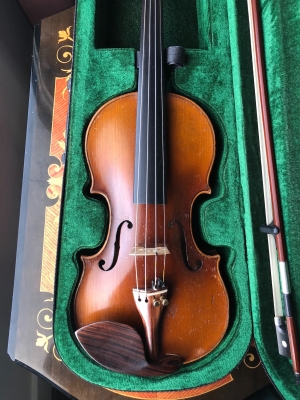 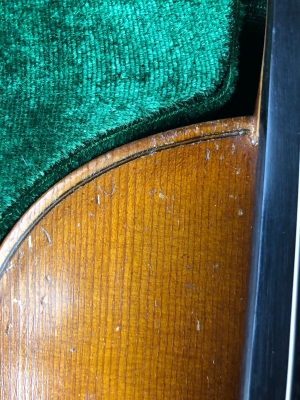 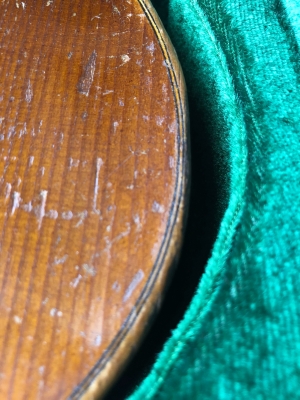 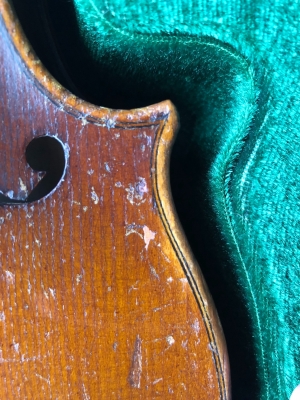 On these pictures the purfling does look to be more real

So yea, it's most likely inlayed. Still not much grain visible on the pictures, but you can sort of see the how they're put against one-another in the corners as well as a completely different color of the inlayed wood in certain areas. Also some of what I initially thought was grain continuing on to the pufling on the darker pictures, turns out to be small cracks in the varnish.

You can see that the wood between the two ebony stripes has a completely separate grain (perpendicular to the black lines) and it follows the way the purfling is bent.

You can probably find something like this on yours as well, though it will be harder to spot due to the cracks in the varnish, but if you shine a light at it from an angle you'll see it better.

Anyway, others might be able to tell you more about your violin, Fiddlerman runs a shop after all 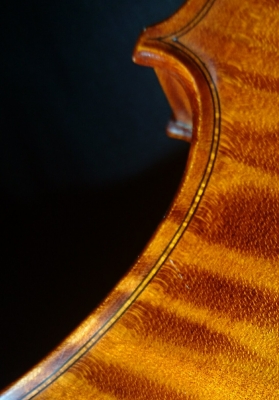 I would have assumed the maker was Bulsani Tyrol, in 1854, making a copy of one by Alsani.

Well, Matthias Albani II the Violin maker lived between c. 1634 – 1712 but that is a "copy of". The instrument looks like a fairly new instrument so my guess is that it's less than 75 years old.

I would have assumed the maker was Bulsani Tyrol, in 1854, making a copy of one by Alsani.

Charles, I think that's still 1654, even though the top circle reaches back all around, the top of the bottom circle is rounded upwards... I haven't seen a single font type, old or new that does that with an 8, however I have seen several that do this with a 6.

Also Bulsani Tyrol is not a name, but a location, a province in Italy... and coincidentally that's where the first Mathias Albani was born / lived. The one that lived between 1621-1673...

So all the dates and information as well as the random reference to him making a violin in 1654 point to the fact that it's referring to the first Albani and not the second, even though the second is probably more famous and made 'better' violins.

Also yes.. the violin looks to be fairly new, especially on the first set of darker pictures.. however the second set of pictures reveal that the varnish is cracked all over the surface and a bunch of other age marks.. but then again 75 years is still a long time so Pierre might be right on that one

It's hard to tell from photos.