Peg slipping
Does getting some good new pegs solve the dilemma?

Is peg slipping the result of permanent damage or slight deformation of peg holes or are the pegs themselves responsible for this nightmare that haunts almost every beginner? As in does getting new and good pegs help? Moreover are peg drops recommended, or do they cause damage to the violin in the long run? Any replies will be appreciated:)

I've never used peg drops or peg dope, so I can't really comment on what they may do in the long run.

I have 2 violins and an oud (12 string peg tuned instrument), and mostly I had to experiment to learn how much to press in on the pegs when tuning to get them to hold, but not be so tight that they stick.  That can take a bit of time to figure out.  Not months or anything, but maybe a week or two.

Also, when I change strings, I take a minute to turn each peg several times (while it doesn't have a string on it) to sort of de-burr any imperfections between the peg and the hole.  I was told to do that with the oud, and it seems to work to keep them running smoothly, so I also do it on violin.

I imagine that if a peg/hole was really badly fitted, it could cause problems.  But short of having a friend who is a more experienced player or maybe someone in a shop tune them to give an opinion on that, I don't know how one would diagnose it for certain.

Thanks a lot it does help but i asked something different. Any opinions about that?

To answer your specific questions in order.

1.) While peg slipping obviously does not "haunt every beginner", it seems to have been a problem for some.  I would think that either the hole or the peg could be at fault, if they were damaged or very badly fitted.

2.) Would getting new and good pegs help?  I would say that it might, but it also might not.  Each peg is custom fitted to a specific hole.  Just getting new pegs alone would be unlikely to remedy such problems, unless you had them fitted by someone with the tools and knowledge/experience necessary.

At the risk of annoying you by presenting a bit if supplemental information that is not a direct reply to one of your specific questions.. My peg tuned instruments are student grade at best.  Therefor I doubt that they have what you might be considering "good" pegs.  They have not presented any problem to me personally.

3.) Peg drops are somewhat controversial. Some people say they are fine, some have said that they could cause damage. In my opinion, anything that might soak into the wood might cause problems and may be considerably harder to get rid of then it was to apply.

My personal view on the matter is that I would prefer to avoid any such "fixes" until i have exhausted the possibilities for the instrument to behave properly, starting with doing some experimentation, asking questions, and making sure I understand what is necessary to tune the instrument.  There is at least a slight learning curve involved for how hard to press in the peg to get it to hold but not be in so tight that it sticks when you try to tune it again later, as I previously mentioned.

But hey, in the end it is your violin and your choices.

As a beginner I never had any issues with peg slipping on any of my violins, even the cheapo one. No haunting beginner peg issues.

I think the answer to peg slipping is the drops.  Or I have heard that rosin dust can help prevent slipping.

I was under the assumption if the are pegs that slipping they are not fitted quiet  perfectly. In slight cases I think the drops or rosin helps, in severe cases I think people buy and fit new pegs, or have their local violin shop do this.

I could be wrong about this.

Just to be sure, you are pushing in on the pegs as you tune them, no?

People commonly put chalk or rosin on the pegs to stop slipping.  IDK about chalk, but I did put rosin on the pegs of one of my violins when it was new.  I think one of my pegs is a little sticky because of that, but if your violin is not expensive and your tailpiece has fine tuners, I wouldn't worry about that at all.  To reverse it, at worst you would have to do some minor reconditioning or cleaning of the peg holes.

If the pegs are slipping, there is a reason for it.

My personal speculation is that peg drops is a racket.

Actually this is a cheap violin that i've had for some time(2 years), plays pretty well, even won some local competitions. I live in the subcontinent and here mostly i.e in Pakistan or India, we play instruments quite differently at times. My teacher used to tune my instrument one step down. "Cajun tuning" according to pitch perfect software. However i changed to standard around 7 months after i started playing. The pegs worked perfectly at first but 1.3 years later the E string peg won't stay at 659 Hz. So now i don't have the string anymore and actually helps me to play at lower end of A string and practice more over there. I did at one time put the violin head in cold water(idk why read a science book and wanted to find whether contraction helps) It did for three days!:P but later on i gave up. At times i have been able to tune it and keep it in tune for like three days at most(I used your method Daniel B of just pressing it hard enough;doesn't work anymore though) so yeah that's my sad life! I'll try the alchol+glycerine+rosin tomorrow(it's also called glycerol right? the part of fat molecule, i  wonder what the source for it can be.

Ok, violiny, thanks for the information about the problem.  From some of the violins you had been asking about in the forums here, I wasn't sure if your current instrument was something you were willing to take some risks with or not.

From your question on glycerine, I would guess you may be considering making your own mixture for peg drops?  The quantities and methods described in the patent might be useful.  Useful info starts about halfway down the page.

You'd have to cut the amounts down, since that would make quite a lot, but it gives a fair idea of the ingredients involved in the commercial ones, anyway.

And yes, glycerine and glycerol are two names for the same chemical.

I haven't run into the problem you're describing, and it doesn't sound like there's a lot to lose in trying some things to fix it.   I probably would, in the same situation.

Hope you find an answer that works for you, and I wish you the best of luck with fixing the problem.

Slippery pegs can be the result of quite a few things. I've even seen very expensive violins with slippery pegs. The material and hardness of both the pegs and the holes are important. Sometimes the pegs have some kind of compound that actually doesn't work in the pegs favor.
Peg drops can work but it can make matters worse as well. I recommend first using 0000 fine wool on the pegs, work them in the hole and repeat a few times. You can also try micro mesh sand paper such as a 1500 grade or similar. You can also try cleaning the pegs and the holes with a little bit of alcohol on a rag. In the worse case, you can ream the holes carefully turning counter clockwise instead of clockwise to avoid cutting bigger holes that will require new pegs or new dowels and hole.

Interesting! Thanks FM, and DanielB that's the only good thing about my violin..no regrets later with the experiments i carry out:P Thanks for the help everyone!

As a professional wood worker I may have picked up a little knowledge over the years as to what is good for woods and what is not so I'll pass this information along ...

As pegs are of a different wood than the peg box they both may react to heat and humidity at a different rate resulting in sticking or slipping or both ...the grain and hardness in any one area of the woods is another factor ....even if all else is correct , there can be problems ...in addition there is also work hardening of the materials from use , not to mention burnishing ..

Naysayers who have no first hand experience ...well , that's another story ...

Hill peg drops will not harm your instrument , work both for slipping and sticking pegs and prevent wear as well ...very , very good product ...just remember to back off your pegs and then tune up and there will be no trouble at all ...happy fiddlin'

Pierre , you are correct of course ...  but then again , that's why i use Peg Drops Peg Compound from Ardsley Musical Instrument Service in Scarsdale , NY ...fixes slipping or sticking pegs ... 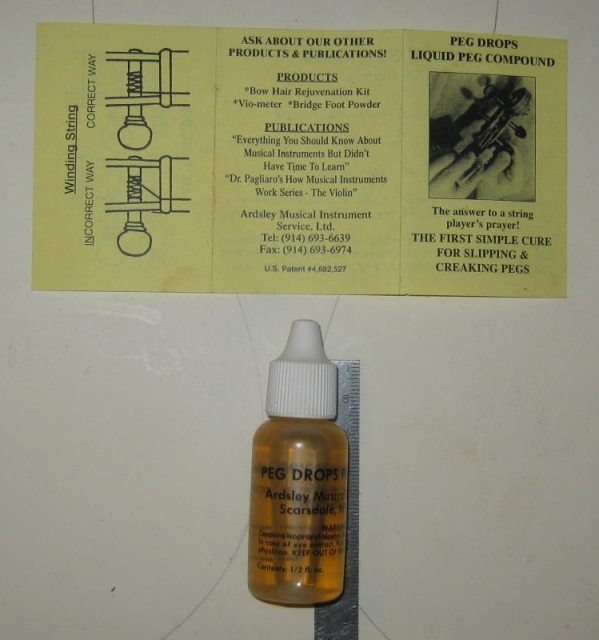 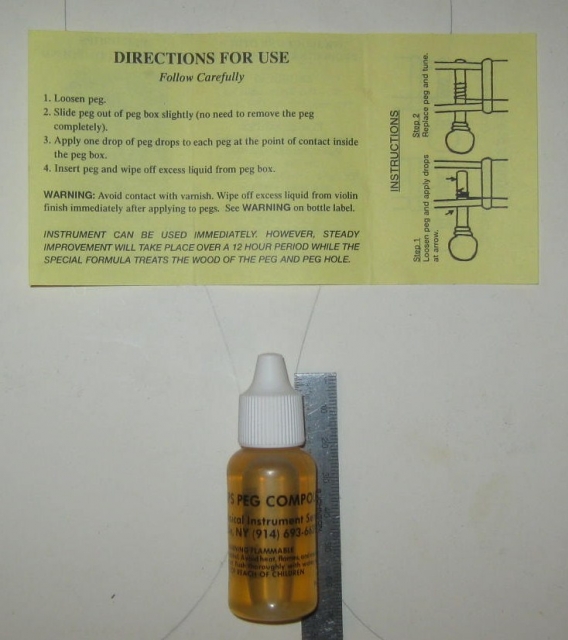 Maybe we should get a hold of some.

Pierre , I'm thinkin' these drops/compound would be a good addition for yer inventory ...in this picture you can see how far into the peg box this nice old set of pegs have worn in the past hundred years or so ...had they been treated sooner the wear would no doubt be much less but thanks to this treatment they still work flawlessly .. 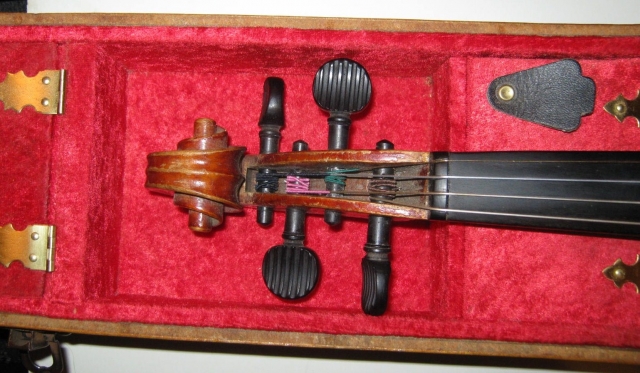 I suppose they do have the multi purpose effect but I've always used the compound instead. LOL
Yes, same drops. Thanks for pointing that out Panzón