Does anyone know of any Rosin which doesn’t affect the airways? I sometimes struggle with a sore throat after playing which I assume comes from the dust created which is invisible. I have thought of wearing a mask while playing but would rather use a different rosin if there is one which fits the bill

It's supposed to be hypoallergenic, but I haven't personally tried it.

From what I read it's extremely important to have all old sap-type rosin completely removed from the hair before applying "Clarity".

btw, I always flick off any possible excess rosin, using the top of my thumb nail on the underside of the hair (arms length away from me), before playing.

Thanks for the info I will check it out

In my opinion, Clarity is not good rosin, from everything I have read. I checked it out earlier this week. I am dealing with issues with rosin now. I have not been able to play for over 2 weeks, and cancelled 2 lessons. I am in the process of trying two new rosins.

Fiddlershop recommended Yumba when I contacted them earlier this week and explained my problem. It is made from beeswax and is not pine based, and is less dusty. I am ordering it after Sept 7.

I just received some rosin I never used that is pine based, but is supposed to be low dust. It was recommended by the semi-local violin shop. They shipped me some. It came today. I have to clean the bow hairs before I use it. Will let you know what it is and if it does appear to be low dust, after I try it.

The Clarity has bad reviews. You can try it, but it is manufactured, not made from pine or honeybee wax. It is said to be very brittle, hard to get on your bow and not grippy enough. There is a grippier cello mix of it, but still the other issues. If you are not allergic to the pine, I would not recommend trying it. It was made basically for those with an allergy to the pine. That is different than being bothered by the dust.

Jade is also supposed to be low dust, although, I do not find it that way. That was the first rosin I ever used. It is cello/violin/viola rosin.

The rosin that arrived at my house today is supposed to be grippy and less dusty than my others. I told them what I was using. I should not have to use as much rosin and it is less dusty. I am hoping it solves my problem. If it turns out that I have developed an allergy, the Yumba should solve that issue.

If I have issues after trying both of the new rosins I am trying, I am simply going to wear a mask when playing. Thing is, it won't help my eye area. I don't have a throat issue. It is more a facial skin contact with the dust issue that I have developed since switching from cello to viola. My face is now closer to the dust because of the position of the viola, compared to the cello. Stopped playing two weeks ago, cancelled two lessons. It started clearing up and healing. Played two quick songs on the viola Tuesday. Issue resurfaced quickly. I have not played since, and it is clearing up.

I will try to remember to let you know about the rosin I received today, and the Yumba when I get it after I order it. It will be a while with the Yumba because I won't be ordering it until after Sept 7.

It could be that you should be using less rosin. What kind of rosin are you using now?

I am using jade at the moment, it seemed ok at first but is now getting to me, very annoying. I didn’t practice yesterday because of it, and I did wear a mask today but it feels strange. I would be grateful if you let me know what the new rosin is like, it’s becoming a real problem now. If the yumba is any good I will order some of that and try it out, thanks for the reply, much appreciated.

@stringy and others - I, fortunately, appear to be immune (or at least unresponsive) to the rosin dust itself, and to any possible allergic reactions.  It is interesting that my Andrea Solo rosin carries such a warning, and for that I highly commend their approach to identifying a possible allergen in their product.

I posted a "funny" concerning this on FB recently - and please don't misunderstand me - it IS a joke and comes as a result of my Scottish sense of humour - and as I mentioned, full marks to the manufacturer for pointing this out! 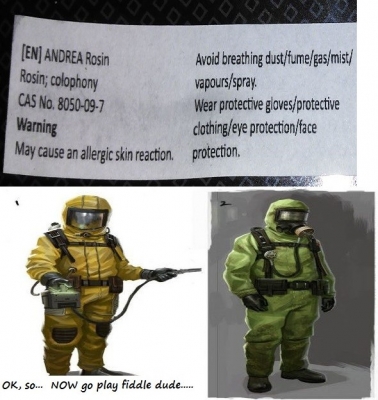 @stringy First impressions of one of the new rosins I am trying. This is the rosin I ordered from our semi-local violin shop. I have not ordered the rosin from Fiddlershop, yet. I will be ordering it Sept 6 or 7.

This is Arcos violin/viola rosin and Arcos cello rosin.

We cleaned all my bows thoroughly yesterday morning. They were rosin free this morning, and this is the first time using these rosin cakes.

First, I did not have to pre-scratch the rosin surface. They started rosining right away, both the cello rosin and the violin/viola rosin.

I did not run it across my bow a super amount of times, like you normally do with a fresh bow. I only swiped it across, maybe 10-12 times. I should have counted. It could have been 15, but I know it was not like I have had to do with other rosins.

I first tried it on my Fiddlerman Concert Deluxe violin and a Fiddlerman carbon bow. I don't think it matters whether it is a wood or carbon bow. I dusted off the top of the violin. Wow! I could tell the difference right away. The sound was great. There was absolutely no scratchy sound, just bad playing intonation. Understand, I am not taking violin lessons, nor do I play my violin as much as my viola and cello, although that may change now.

I never noticed a difference as much with rosins, but I have loved Holstein Premium, Kaplan, Santory and Guillaume(?) and wish I could still use them. Never liked Jade. It is not that my playing has improved because I have not played my violin for a while. I have not played any of my instruments for almost 3 weeks now because of the skin issue that developed.

The bow gripped nicely, without causing bowing issues or the scratchy sound. It was great. I played a couple slow songs and a couple faster. When I was done, there was no rosin dust on the top of my instrument. My Fiddlerman Concert Deluxe has always had great sound, but it sure had a heck of a lot more oomph this time. I moved on to my two cellos. It was the same result with my mellower violin. It was warmer and projected more. No scratchies.

Wow, It was really full sounding. It bowed nicely across the strings, and not scratchy. I was having a really hard time with that with my cello scratchies and it was gone. I played some cello songs. When I was done, there was no rosin dust on the cello top.

I then got out my lesser quality cello. It sounded completely different than it had before. It was shallow and wimpy before. It was full and robust. I played the same songs that I played on my other cello with the same result. Easy bowing with great sound projection, albeit, not the best intonation. When I was done, no rosin dust.

I did not do my viola yet. I don't have as many viola bows and don't want to have to clean them again if I develop skin issues later from these tests, indicting maybe I have developed pine issue, and it is not just dust contacting the skin. I will make sure I don't develop an issue with what I tested. Then I will give it a whirl on one of the viola bows. I am hoping I can get my viola lesson this week.

This is just first impressions. I will update you later.

That stuff sounds really good, and thanks for giving such an in depth reply. I don’t think most people take much notice of rosin until it starts to affect them in some way, I will give the Arcos a whirl I think, and see if it makes any difference. I have found with the jade I constantly have to rosin the bow, which I don’t like having to do. With the Arcos that you mention it seems a good sign that it doesn’t leave a residue, maybe it will be easier on the lungs.

Remember, that is just a review of the rosin and its dust, and playability. I do not know if you are actually allergic to the pine. But for dust issues, for me, I did not have dust issues and that difference is quite noticeable, more so with the Jade. The playability, for me, was also quite noticeable, as I described. I could still have developed an pine allergy issue. I am going to do my viola for a regular practice session period of time after lunch and see what happens.

On the other hand, my experience is that Jade is extremely low dust and plays easily -- in fact, switching to Jade caused an instant improvement in my bowing technique because I didn't have to fight the strings as much. The only down side to Jade is that the rosin doesn't stay on the bow very long, but even so, three or four bow strokes across the rosin cake will get me through a 3-hour orchestra rehearsal.

Jade is exactly what I currently recommend to anyone who wants a low-dust rosin.

But choice of rosin depends on a lot of things: strings, playing style, and especially climate. I find Jade works well in a hot, dry climate. But it is a soft rosin that may not work nearly as well in humid climates.

I like both my Jade and Yumba the best...in Texas, hot all the time! - Yumba slightly more...no dust that I've noticed, nice rosin.

Okay, I did my viola last night. I did not like the Arcos Violin/Viola on my carbon fiber viola bow. I put some Arcos Cello rosin on it and tried again. It was better, but still not comparable as the cello rosin was with my cellos, and the violin/viola with the violin. I will be able to do the viola lesson, in spite of the eye issue resurfacing.

Yep, last night after a long viola session, the skin around the eyes got bad again. and still is today. I played a LOT more using this Arcos rosin than I was able to with my other rosins, probably due to low dust. None of my instruments ended with dust.

I am pretty sure it is a pine dust issue and not just a general dust issue for reasons I am not getting i to here. So, I will play limited viola between lessons and wait for Yumba ordering time and arrival. I won’t use the Arcos on any of my other bows that I have not put it on. D a r n. I really loved it on the violins and cellos. REALLY LOVED IT.

I hope all of this is of some help to someone.