So after watching videos on how to change strings and the sound post and bridge positions I looked at my violin and could use your opinion.

Bridge wasn't lined up with "F" slots so I fixed that. Then I look at bridge but it doesn't slope down where the "E" string sits. Once I got the bridge in center and aligned with "F" slots I see the "G" string is closer to the edge of finger board.  Also the sound post is ahead of the bridge towards the tail piece about the distance of the sound post width.

So does this sound like a mess or what?  Salvageable? This is a beginner inexpensive violin.  I was thinking of getting new strings but not sure if I should put any money into it.

The sound post sounds like it in the right place. If you could post picks of your violin it would help. as far as cheap violins go they most usually don't have a good setups. can you tell us what brand and model it is?

Fran said
So after watching videos on how to change strings and the sound post and bridge positions I looked at my violin and could use your opinion.

Bridge wasn't lined up with "F" slots so I fixed that.

Sounds good...  although it is just a "guide" ( there are more precise ways of locating the bridge by doing careful measurements, but, that will be fine for now )

Then I look at bridge but it doesn't slope down where the "E" string sits.

Roughy - the bridge arc should give about 5mm clearance to the G string at the end of the neck, and about 3mm clearance to the E.   It sounds from what you describe that the bridge blank may not have been shaped properly - however - I would suspect that largely all that will happen is that the "action" is higher - i.e. you have to depress the string further than should be necessary to make it reach the neck/fingerboard.  Having said that - if you are a beginner, and probably not moving far up the neck (the action height gets higher the further up the neck you play) I suspect that wouldn't really matter over much....

Once I got the bridge in center and aligned with "F" slots I see the "G" string is closer to the edge of finger board.

Sounds like a poorly cut bridge, in general - however - you can even - up the string spacings by very carefully filing (use a nail file or jewellers file) to put a tiny slot in the bridge where the G should be.   If you can tell it is "out" at the moment just by eye-balling it, although there ARE specific inter-string gaps - you would quite easily get away with just making a new slot, a few mm closer to the D string

So does this sound like a mess or what?

Salvageable? This is a beginner inexpensive violin.  I was thinking of getting new strings but not sure if I should put any money into it.

I would still go for the new strings (keep the old ones to fit back on if you eventually decide to sell/otherwise dispose of the instrument.)

Whatever limitations you are identifying there will almost certainly NOT prevent you from playing the instrument....

Anyways - that's my thoughts - let's see what others have to say.   Actually, it kind of sounds similar to the condition of my original Chinese Skylark - I bought a few bridge blanks and worked them to shape - it's not difficult - but - you benefit from a few simple tools and the ability to make careful, precise measurements (digital / or even traditional / micrometer etc ).   I still have that instrument, but she's now restrung as my viola !  LOL    As I say - wait for more informed feedback from others, but it doesn;t sound like anything that would prevent you from getting started....

EDIT: @OldOgre must have been typing at the same time as me - he's got a point - pictures are worth 1000 words LOL ! 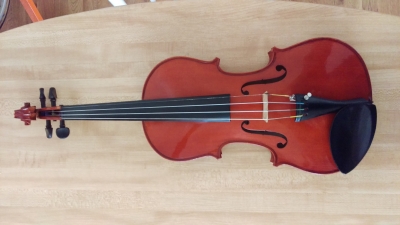 This is my violin. I played around more with bridge. It's a Cremona cost me about $200.

Hey Fran, your violin looks great with the dominant

I see nothing weird on the pic, but you can check a few things.

I am not sure if you refer to the string height, or if the G string side of the bridge seems to be closer to the fingerboard when we look at the instrument like the way the pic is taken.

If you refer to string height,  you could check the G and E spacing issue by yourself. You can measure the vertical distance (string height/action) between the end of the fingerboard and the E string, then from the G String. Someone correct me if I remember wrong, but they should be respectively around 3.5mm for the E and 5.5 for the G.

You could expect some deviation from this, but I would only consider fixing the issue if the spacings are equal, or the G is lower than the E, for example. Anyway the point is that from E to G you need to have progressively more string height, for various reasons. If you think everything is messed up, either take your instrument to a violin shop, or follow @BillyG  's advice

If not,  It's quite normal. The bridge is cut by a human being, and should have an arc within some limits. However when you look your violin from the side, the back side of the bridge (the one near the tailpiece) should form a 90 degrees angle with the top plate of the instrument. You can check this by either using a small business card, or by visually estimating if the back side of the bridge is parallel to the rib joints (supposedly they are correct as well). Mind that as Pierre said in another post, when you tune your strings, the bridge could lean forward, and collapse. If you need to adjust it, take a look at this video, , I once found those sketches and close-ups useful.

Fran, as mentioned above, you don't seem to have any problems from your descriptions. The bridge is easy enough to move. There could be all kinds of problems with your instrument but nothing obvious can be seen from the photos. Kind of looks like the bridge is slightly too far forward towards the peg box and too far to the left towards the G string side. It can still sound great and is no big deal. And luthier, or knowledgable workshop or player can help you with that.

I actually moved the bridge as you state after I took this picture.  I watched your videos and saw more exactly where the bridge should be located.  I just bought your FM string set and will really make sure the bridge is in the correct place when changing the strings.

Looking forward to your feedback!

Got e-mail saying it's preparing for shipping! Can't wait!  As soon as I get them and put them on I'll write a review.

Was happy to read the news about changing your strings. Glad it went well.