Many questions are asked about string sounds. Fiddlershop has a Violin String Comparison Chart on their site. I am providing a link for you here.

Remember, instruments and instrumentalists differ, but this is a good start.

The Fiddlershop chart differs from the Shar chart. Notably, it places Tonica as being warmer than Dominant, whereas the Shar chart shows the opposite. There is also substantial divergence in all the Vision strings, as well as Evah Pirazzi Gold, Zyex, and several other brands.

There is also some divergence of both charts from the one at Violin String Review.

Most likely this reflects testing by different people on different instruments.

Is there any similar chart for viola strings somewhere ?

@wtw, it is on a competitor's site. Google Viola string comparison chart and you will find it.

It didn't occur to me until a week ago that I could do the usual thing of downloading and uploading just the picture. This is probably acceptable practice. This is a competitor's chart, so you can get a slightly wider/different viewpoint: - 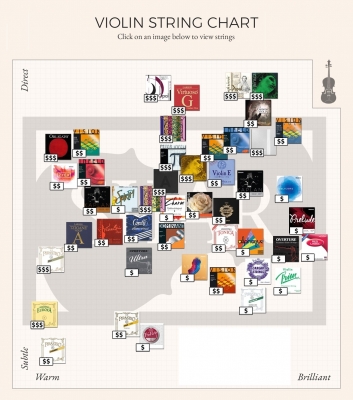 And here's fiddlershop's link again for easier comparison than going back to the OP: - https://fiddlershop.com/pages/.....comparison

But Fiddlershop's link is interactive, so I don't know how to post a picture here.

Mouse said
@wtw, it is on a competitor's site. Google Viola string comparison chart and you will find it.

Thanks Cynth. Yes I completely agree. Would prefer not to have links to competitors though I feel the forum in itself isn't picking sides. The users are.

Gordon Shumway said
It didn't occur to me until a week ago that I could do the usual thing of downloading and uploading just the picture. This is probably acceptable practice.

And here's fiddlershop's link again for easier comparison than going back to the OP.

Our comparison chart was done without looking at anyone else's chart. We spent a lot of time doing it. Another difference is that you can click on each individual string to get more information. 😁

I won't object to the Shar advertisement in this case since most people know about Shar anyway. But moving forward, if it has advertisement on it, I prefer not for you to post it. Thanks for keeping it in mind as I know that you reached out.

I won't object to the Shar advertisement in this case since most people know about Shar anyway. But moving forward, if it has advertisement on it, I prefer not for you to post it. Thanks for keeping it in mind as I know that you reached out.

I have now edited the picture to remove their name and the prices. I apologise for not thinking about this in the first place.

Some of it is subjective (I imagine, but if you want to debate it, fine), so there shouldn't be harm in two charts that have minor differences. It's interesting that Fiddlershop think that Tonicas are warmer than Dominants, whereas Shar thinks it's the other way round. Someone somewere recently said he thinks Dominants are too harsh, and my new ones are taking a long time to settle, so I may try some Tonicas next to see if they do find their warmth quicker.

I agree, Gordon. It is all subjective. I think it differs not only per what each violinist, violist or cellist hears, but what particular instrument the strings are on, even the same brand/model. I think it also depends on the acoustics, or lack of, in the room the instruments are being played in. If the user does not a have good acoustic studio to play in, and most of us do not, the strings will sound different than when played in a studio, also, wouldn't they?

I think it is good to have some kind of starting point. I would think the brands/models at the extremes of each spectrum would at least have the tonal quality, in some way, of the spectrum they appear.

I find it hard to recommend strings, as far as sound goes. I can say how they sound to me, on my instruments, but someone playing the same exact instrument, mine, with those strings, with the same bow, may produce a different sound, probably a much better sound. This could vary, also.

But, I think, it is a starting point. I have string brands that I love, Fiddlerman, for example. For me, they sound really nice on my Concert Deluxe and I believe would sound great Grampa's Fiddle. They sounded nice in a precious violin, also. But, it is not only the sound that I love about them, I like the way they feel under my fingers. I also find them to settle quickly and hold. That, too, could vary per instrument and location.

I have a different set on order for my warmer violin and the Fiddlerman strings will be removed from that violin and placed on my Grampa's Fiddle. The new set, different brand, and ones I have never used, will be used on my warmer, non-fiddle, violin.

So, two charts are helpful and could vary, as shown by the Shar and Fiddlershop charts. I think it is helpful to view both.

Thanks for pointing this out. I think, and this is opinion, the point you made should be very helpful to those new the the endless search, or curiosity driven search, for strings, and maybe not-so-new to the search.

Well, it's not all subjective - if it were, there would be no point in the charts.

As a noob, without much ear training in tonal qualities, do really warm strings run the risk of becoming "muddy" and brilliant strings becoming harsh? Does the warmth versus brilliance have to do with the relative number and intensity of harmonics and overtones?

Yes to all your questions, John.

If you look closely at what's on offer, all the warm strings seem to be gut, which I intend to avoid as long as possible.

My teacher's first recommendation was "something middle of the road, like Dominants or Tonicas." But the three violins I have bought have all been supplied with those two strings.

I went to the Shar list (2 1/2 years ago, before Fiddlerman's list existed) and eliminated things by price and material and whatever and ended up with a shortlist of Dominants and Tonicas.

To any noob on this forum bewildered by those charts, I'd say, get Tonicas or Fiddlershop's equivalent (I hear they are exceptional value) and forget the rest for a few years.

@Gordon Shumway - Thanks Andrew, wasn't really looking to change strings at this point, but wanted to clarify my limited understanding. That being said, the perceived tonal difference between my G and D string grates to me. To my untrained ear, the D seems more brilliant and the G, warmer. Won't be changing soon, as my technique probably wouldn't notice the difference.

You have only been playing for 2 months, is that right?

Each string needs different technique, but it's unconscious, so don't fret about it.

Each string has a different character and response.

My recollection is that each string "comes in" for the beginner at a different rate. In other words, if my experience is typical, first you will get good tone from the G string, then perhaps the E string - I don't recall having any difficulties with mine, so perhaps it preceded the G string (probably the main reason for the E string making your ears bleed is intonation). Next the D string starts sounding nice - work on it on its own - play E, F, F# and G slow and loudish, varying bow pressure and speed and listening for changes. Finally you will get the A string to sound nice.

Possibly you won't notice the full effect until you are using vibrato. I can't remember.

The main thing to take away is, play each string for itself initially, rather than playing the whole instrument. That's starting to sound philosophical, lol!

With a slight change in lyrics, maybe this is what you're suggesting? lol

I think too bright is harsh and too warm/slow to respond can be muddy (I'm still trying to figure out the best C String in my case).

Sorry, don't think intonation has anything to do with a harsh sounding E string.  Pretty sure anyone can easily tell the difference - because when you make a string comparison (1st hand), you play the same way on both strings.

You are playing in tune, so trust your ears!

Seems like some of our instruments have one string in particular that needs special attention.  So, if you like the sound of your other strings, the chart will help you find a warmer D string to try - if that's all you need.

One thing to keep in mind, some brands offer 2 different D Strings - each a different material, so will act different - check your brand, might be the only change you need (if you want to keep to a set).

Many of us mix brands on our instruments.

ELCBK said
Sorry, don't think intonation has anything to do with a harsh sounding E string.

I was trying to say that mostly if an E string offends, I think it's because of poor intonation (combined with its conspicuously high pitch) rather than its harshness/warmness. Or, E-string harshness pales into insignificance compared with poor E-string intonation. I haven't heard John play.

Edited: btw - I don't have an E string since I have a viola, it's the D string I was noting.