Wondering what this may be

i think it’s mounted on the A and D 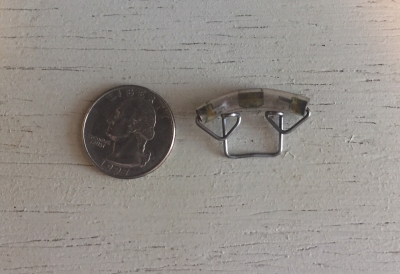 strings between the bridge and tailpiece

I'm thinking it's a small mute.

It used to be the most used sordino on the market. Commonly used in orchestras. They were practical before the rubber sordino came around. They were always handy and on your strings. You just need to slide them up on top of the bridge.
Nowadays they are not that common but we still sell them at Fiddlershop.
https://fiddlershop.com/collec.....iolin-mute

First mute I bought was a beautifully carved and polished piece of mahogany. I just had to have it as a beautiful thing.

Then I bought a couple of different rubber mutes and sort of came to the conclusion that the heavier the mute, the more it muted.

Then I bought one of those solid metal ones and also an Artino (metal core, rubber on outside). I hated the solid metal one - there seemed too much risk it would harm the bridge or the fiddle or both. However, that Sihon wire slide doesn't look very bridge-friendly, but if it comes off, it won't hurt the violin at least.

So I use the Artino (the fiddlershop price is half what I paid!), but I saw a FS demo video, where the solid one was preferred.

Is it only about weight?

I wonder if you could have a solid heavy-metal one that just has a rubber "lining" where it sits on the bridge, so that it doesn't harm it, and the friction makes it sit more securely?

But if it's not just about weight, the physics of it might mean that the rubber lining would give the bridge just that little bit more freedom to vibrate.

@Fiddlerman, can I ask, please, those nuts and bolts on the Artino, are they really only decorative, or can you pull the thing apart and adjust it? If so, how do you do it?

(it's incredibly tight initially, so you want to adjust it - I attacked it with a screwdriver and deformed the rubber a little. Eventually I got it on, but luckily it was strong enough to survive the abuse)

The bolts are not there to adjust the mute. I've never taken one apart though.
The way I adjust volume is by pushing it on harder or applying it softer for more volume.

Sorry, when I say adjust, I mean take apart. It seems that they can't be taken apart, which is puzzling.

Not meant to be taken apart though. It's just part of the build.
Maybe you can improve on it though.

When I was a kid I took apart most of the presents my parents gave me and tried to put them back together. I think that is why I learned to fix just about anything which is repairable and I am never scared to try. Obviously, sometimes I fail.