Wrist Practice Aid's
I'd like to know if these product's are recommended, and does FiddlerShop sell them?

I was looking at a wrist practice aid on Amazon. I was wondering what the crowd thought of their effectiveness.

If they are effective, does fiddlershop sell or recommend one? I didn't see on for sale there, but I may have missed it.

I tried this once but "NOOOOOO" IMAO

If you want to see if it works, just get a paint stirring stick from Home Depot (free I imagine) and tape it to your arm. Then later you can say, "man this sucks," without wasting $14.95.

Good idea, @Uzi.
You could also order some Chinese food to go and ask for some extra chopsticks, and then tape them whatever way you wish. If it doesn't work out then at least you got a good meal, providing you ordered some good ones, lol.

Well, maybe in some cases, at least for a limited time or usage, some of the assorted "aids" like this can perhaps be helpful to some people. Like if someone has the bad habit of letting the wrist collapse or arch when playing, such a device might get them to keep it straighter long enough to realize it is actually less fatiguing and etc.

But yeah.. Make one, if you want to try it, rather than spend money for what is basically a stick and a couple bands.

I never tinkered with this particular concept, since I already had learned to keep the left wrist relatively straight from playing guitar and bass. But I did use a gizmo I made for addressing a form problem, fairly early on.

One the page Pierre gave a link to, I see a link for the Pinkinest..

I was having a bit of trouble with "flying pinky" on my bow hand. Especially early on, there is so much to remember at once, and I'd be watching on part of my form and I'd end up lifting my pinky off the bow. I didn't think it was actually important. But more experienced folks told me that it definitely was. I saw the gadget and made my own out of a piece of plastic tubing. (Not that the official gadget costs a lot or anything, but something that simple, I'd rather just make it.)

Inside of the first day of using it, I was already figuring out that the pinky could help more with bow control than I had been thinking. The gadget wasn't uncomfortable and didn't interfere with my normal playing, so I just left it on for I think a couple of months. Then one day when I had it off to wipe down my bow, I just left it off and.... Nothing bad happened. LOL

My bow hand pinky had learned it had a job to do, and had developed the habit of being on top of the stick and helping to control the bow. I feel it definitely helped my playing, and was a nice automatic fix to that problem. I never had to think about "trying to remember" to keep the pinky on the bow. It just felt natural after that to keep it there, since it does a lot of the bow control.

I think "training wheels" can be fine, so long as they come off at some point and they don't somehow encourage worse habits than they are intended to fix.

If you think a gizmo like that wrist thingy *might* help? Heck, grab a tongue depressor or a small ruler or whatever and a couple of hair ties or something and try it. If you feel it maybe works but isn't as comfortable as the commercial one might be? Ok, then there's reason to get the commercial one maybe. If you decide it's a waste of time, well you didn't lose any money over trying the concept.

Anyway, here's a pic of my "homebrew pinkinest" thingie. If anyone is having trouble with the bow hand pinky, all I can say is that it worked for me, and it's easy enough to make yourself one. Of course, your mileage may vary.. 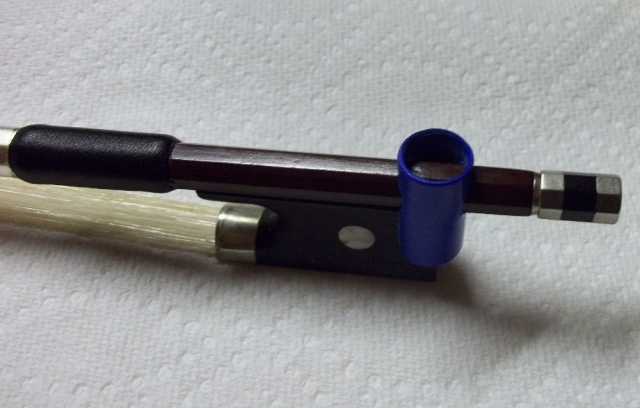 I was only referring to the Wrist Practice Aid. I believe that the Pinkinest could be good if you have that problem to help get you on the right track.

Hahahhahaaaa! Guys, that's too funny!
Agreed with everybody, i've nothing to add.