Anatomy of a Tertis Viola

Anatomy of a Tertis Viola

I am currently reading about the life of Tertis, so naturally I wanted an example of the viola he designed.  Until it arrives, I perused a scaled drawing of one (provided below). The widened lower bout is obvious to all viewers.  But I am also struck by how the bass bar and soundpost are positioned outward of the bridge and how the ribs are positioned almost under the plates.  It looks like he intended a loud and perhaps bright instrument, but not a long lasting one.

He favored the use of steel strings of high tension to minimize the distance between the strings and the finger board to facilitate fast playing. 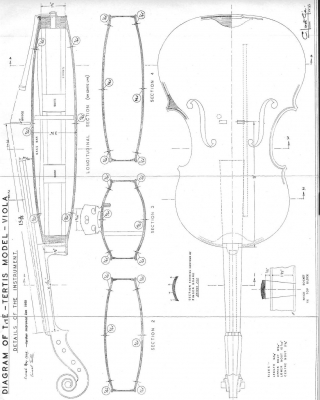 Interesting. I haven't looked too much into all the differences between Tertis violas and other patterns, but as I've mentioned, I've played a Tertis pattern viola for the last 13 years. It definitely doesn't match Tertis's specifications exactly, because mine is 15.75" while Tertis was always insistent about his design being for a 16.75" viola. My viola has its ribs located as described, but its soundpost is in a more conventional location. Not sure whether the soundpost is original or a replacement; the viola was already 27 years old when I bought it. (If the soundpost was replaced and moved toward the center, it is likely longer than the original soundpost.) It's hard for me to tell exactly where the bass bar is without opening up the viola. It is a distinct possibility that the maker of my viola used the Tertis pattern for the body shape but chose not to use Tertis's soundpost or bass bar positions.

One thing I'm aware of, at least, is that there are two "Tertis" patterns, the original Richardson-Tertis pattern and the later "official" Tertis pattern. I wouldn't know what the differences are, or which pattern my viola follows.

Interestingly, Arthur Richardson, the maker Tertis originally worked with to develop the pattern, advocated the use of gut strings with Tertis violas. (Note that the first synthetics were not on the market until almost 20 years later.) I find that synthetic strings of higher-than-average tension work well on my Tertis pattern viola.

My instrument doesn't have an especially bright sound, but it's certainly a cannon. It has no trouble projecting over an orchestra, even with strings that aren't especially loud (regular Vision strings).

Forgive me @AndrewH , but Tertis would call your instrument a “TSO.”  Now that we got the comedic aspect out of the way, to your questions.

The position of the bass bar in relation to the bridge can be quickly sorted by means of a business card with a slit cut in it.  Insert the card through the f hole with half above the belly plate and half below.  The bass bar will block the card from further advancement.  The above half will show placement of the bass bar.

There was only one pattern.  The first was made by Arthur Richardson.  Tertis did not like the appearance of the diagram and had it redone by C. Lovett Gill, who was an architect.  I have looked at both sets and only the Richardson version give plate thickness profiles, which are critical for building.  Richardson had a final falling out with Tertis when he travelled a great distance with his family to attend the second marriage of Tertis, to find that he was invited only to the ceremony but not to the reception.

Richardson developed a method of using newspaper as a shear plate between the plate and the ribs because he had to remove the plates so frequently in the development of the viola.  I really like this idea.

Saunders made the best sounding Tertis violas and attempted to resolve the bulge that resulted by the faulty placement of the sound post 1/4” outboard the bridge by introducing a veneer on the under surface of the belly plate.  Tertis went into a rage when he saw the veneer.

I intend to use an oversized bridge if I find this issue when the viola arrives.

I am reading that the fingerboard is canted in the direction away from the thumb on this viola, but I see nothing from the diagrams or pictures on this.  Also, violin and cello versions were made.

My viola was described to me as a Tertis pattern, and looks like one externally, but of course Tertis would disagree without even looking inside, just on the basis of its size. I've seen other violas in various sizes advertised as Tertis-pattern violas; as far as I can tell, it seems the luthier community generally has no qualms about scaling a pattern to different sizes.

As I've mentioned before, people tend to be far more likely to tinker with viola design than violin design. I also often see viola patterns described as being "inspired by" or "based on" a pattern rather than being made to a pattern as violins often are. It may be more accurate to describe my viola as being based on the Tertis pattern.

I can't confirm where my bass bar is for a while, anyway. I'm traveling without my viola at the moment.

I've only ever seen one viola with a canted fingerboard, a Rivinus Pellegrina viola. I've seen several "Tertis" violas, none with canted fingerboards, but that may not be too meaningful. It seems likely that many violas that are described as Tertis-pattern, up to and including professional-level violas, do not conform to Tertis's specifications.

His desire was to make all violas the same size for tonal standardization.  His height was only 5’ 6”.  He had to retire due to hand issues, rested for two years, and returned to play professionally for another forty years.