Posted on November 6, 2010 by Fiddlerman 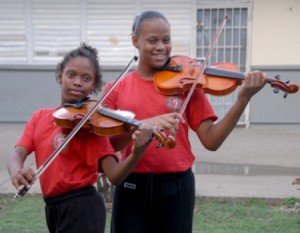 For sisters Kenya and Sabae Barrow, it is all about playing the violin and taking part in karate. They have been playing the violin for more than half their lives and there is no stopping them now. According to the sisters from St John, playing the violin was one way of keeping them “active”. While they have been involved in karate for just about a year, the sisters said they were very happy and they enjoyed it “just as much as playing the violin”.
They have played at a number of events, including concerts and school functions. Kenya also had the opportunity of playing the National Anthem in the presence of Prime Minister David Thompson.
Kenya, who is 11 years old, said whenever she played the musical instrument it made her feel good. But the violin is not all that she plays.
“I like playing the violin. I do it because it is fun and I do karate because it can help me with getting a scholarship and help me defend myself. I also play netball. I am the goalkeeper for my team,” said Kenya, who will be attending the Christ Church Foundation School.Sabae is ten years old and attends the Hindsbury Primary School. She, like her sister, has been playing the violin for seven years now.
“I like violin because it can get me a career. I just love playing the violin. If not violin it is karate. It is all about playing the violin and doing karate,” said the soon-to-be Class 4 student, who described herself as shy.
Sabae said she occasionally “hangs with her friends” and played games with them. Her favourite dish is “gran gran’s cou cou and flying fish”. She hopes to become a singer.
Kenya said she hopes to become an actress or a professional netball player. She admires actress Selena Gomez.
“I am also considering doing athletics. My motivation is the fact that I can get better at what I do and reach the highest. I am hoping to play the violin in the international arena,” said Kenya enthusiastically.
Their mother Dawn Barrow said she got her girls involved in playing the violin because she always admired those who played and she saw it as an extra activity for them.
“I am extremely proud of my daughters. I get so overjoyed when I see them taking part. The feeling is hard to describe. I feel completely fulfilled. Sometimes there are challenging moments but I would think about all the opportunities they have and how they step up and accept a challenge head-on,” said Dawn.

She said the “tiniest” moments were the best for her and she and their dad Errol gave all the support they could.
“As long as they are happy and working towards a goal I am happy. I will do all I can to make sure they have all that they want to achieve their goals,” she said, noting that nothing came easily.
Already, Kenya has completed four exams in violin while Sabae has completed two. Kenya plays with the Barbados National Youth Symphony Orchestra and they both do classes with Suzuki Music Barbados.
Their violin teacher Katrina Forde said they were exceptional students. In fact, she said they had played well over the years and had “progressed nicely”. She was the one who suggested they take up karate.
via Sisters hooked on violin, karate — NationNews Barbados — Local, Regional and International News — nationnews.com.