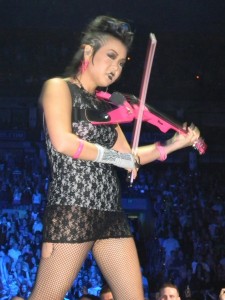 At four, she was playing the violin; at nine, she was performing publicly; in 2006, she began to play a Stradivari violin; and now Canadian Judy Kang is playing with Lady Gaga.

The classically trained violinist, who studied in Philadelphia and at the prestigious Juilliard School of Music in New York, was in Toronto Thursday with Lady Gaga’s Monster Ball Tour.

Edmonton-raised Kang has been touring for a year with the Born This Way singer after being chosen by Lady Gaga for her backup band.

“A friend of mine … just kind of mentioned that she was looking for musicians and violinists. And for me it was like literally like two days later that the audition was going to be,” she recalled in an interview with CBC News.

She went to the audition undecided whether she want the gig and played Speechless and Bad Romance for members of Gaga’s team. She was called back to play for Gaga herself and three weeks later she was on tour.

Kang, 31, is a professional musician, now based in New York, who plays regularly with a classical trio and won the 2006 competition to play the 1689 Baumgartner Stradivarius from the Canada Council’s Musical Instrument Bank.

But she’s also a Lady Gaga fan and has experimented with different musical styles — everything from klezmer to pop — throughout her music career.

A lot of classical musicians like to stick to their comfort zone, she says, but she enjoys the challenge of improvising.

“Every time I play a piece I discover new things. I play it differently each time,” Kang said.

“I feel like music heals and I think that as I play I want to, not just be someone who’s entertaining, but I want to be an instrument to … bring something to people that are there,” she added.

For the Lady Gaga tour, she had to learn to play an electric violin, a new experience as the size and “feel” of the instrument is different. Unlike her usual violin, it has foot pedals to adjust the sound and tone.

Kang said she had to learn about life on the road from the musicians on tour with her, adding that they are like “a family.”

She’s loved to perform ever since she was a child and being in front of 20,000 people is a rush, she says.

“But I like to believe that people go away from these shows changed, and more encouraged and feeling their self worth and, yeah, just really uplifted,” Kang said.

“Her audiences [Lady Gaga’s] consist of a lot of people that are just lonely, misfits that just I guess need love and I just get that sense so I feel like as an artist that’s sort of how I like to look at it.”