Violinist accuses period specialists of pushing Bach into a ghetto 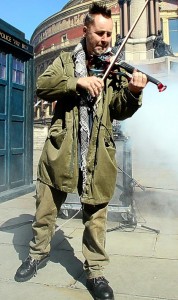 Nigel Kennedy has accused fellow performers of ghettoising Bach’s music with soulless, ‘so-called authentic’ interpretations, reports the Guardian. In programme notes for his recent evening performance at the BBC Proms, he said he wanted to ‘keep Bach in the mainstream and present his music with, rather than without, its emotional core’.

For Kennedy, the ideal Bach interpreter was his former teacher, Yehudi Menuhin. ‘Bach speaks through Menuhin’s violin,’ he wrote, adding that ‘four melodic notes from Yehudi are worth more than a thousand from any of our living violinists’.