• Please begin by telling us anything you would like to about yourself. Age, place of birth, residence, etc.  I’m mid-twenties and from central Texas.  I move around enough that where I am at any time can only be determined by using models  developed for calculating the probability of an electron’s location around an atom.  It’s a good thing I have a solid little truck to travel in!  Most of the year, though, I’m away at school where I’m working on a Master’s degree in mechanical engineering. 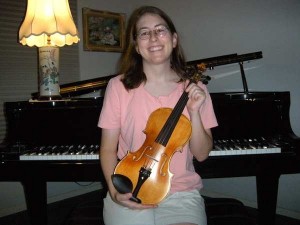 • What made you decide to play the violin?  Well, I was looking for a hobby that was relaxing, solitary, and portable.  I thought that, since I have always loved music, learning a musical instrument would be good.  The baby grand piano was too big to fit in my suitcase so I naturally turned to the other instrument we had in the house: my great-great-grandfather’s fiddle.
Also, the fiddle was talking to me.  She was, she was.  Every time I walked by I would hear a plainative “Play me” coming from the case.  No doubt she was just as terrified as I was that if she sat unplayed long enough my grandmother would sell or donate her.

• How long have you been playing the violin?  One year.

• How often do you play? How long are your practice sessions?  I try to play every day for at least fifteen minutes.  I prefer to play for an hour or more but my schedule doesn’t always permit it.  Also, my practice times have been getting longer since I will play something on one fiddle and then switch to the other to play it again.

• In your opinion, what’s your proficiency on the violin?  Hahaha.  Not so good.  There’s some room for improvement.

• Your greatest personal experience with playing?  I guess that would be the first time I knew a piece well enough to play it on muscle memory alone.  It was strange and wonderful when I first felt like my fingers were entirely disconnected from my brain and I was able to focus on feeling the music instead of hitting the right note.

• What other instruments do you play?  I started violin in grade school but ended up quitting since it just wasn’t fun the first time around because of all of those recitals.  Then, I played the flute in HS and college but stopped since I just didn’t enjoy the instrument that much.  The last straw with the flute was when I was taking a lesson with a bad cold and started to gray-out due to not having enough air for both my brain and the instrument.

• What does music mean to you?  I have a lot of good memories revolving around music.  For instance, going to see performances is something my sis, father, and I have done together for years.  Among more local performances, there’s the summer we drove to Seattle to see Howard Shore conduct his Lord of the Rings Symphony.  There’s the time my sis and I skipped a day of school to fly to NYC with my father so we could see John Williams and the New York Philharmonic.
I also remember doing the Music Memory program with my friends in grade school.  It didn’t matter how short the clip was or if it was a variation on a theme instead of the standard version; I always correctly identified the piece.
My best final exam in college was for a music appreciation class.  The prof played ten second clips of music and we had to identify the work and composer.  Easiest exam ever.  Also, I got to listen to music and call it studying.  That’s a win in my book.
So, music in general has always been positive. 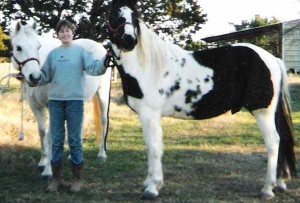 • What or who has been your greatest influence?  None for music.  In general my horse, Leo, has most greatly influenced how I view the world and interact with people and animals alike.  He taught me to be a much better person.

• What are your goals for playing violin?  I just play for fun so it’s more about taking my playing as far as I can without losing interest.  To keep off the pressure I don’t really have any official goals.  I do, however, have a couple of pieces I am working on and would like to learn tolerably well.

• What type of violin training?  My primary instructor is a bluegrass fiddler in my hometown.  From him, I’ve learned mainly by ear.  Last fall I tried studying with a classical instructor but I didn’t enjoy it much so I now rely on the fiddle teacher when I am home and this website when I am away.

• How do you warm up?  Well, I like to start with some nice stretching and an easy walk…oh, you meant for playing.  I, uh, didn’t know people warmed up for that.  I guess the answer would be “I don’t.”

• What is your favorite type of music?  In terms of genre, I am all over the place.  My dad started me at an early age on film scores and that expanded into classical.  I also like celtic, folk, and bluegrass.  Recently, my sister introduced me to symphonic metal which is suprisingly good.

• What is your favorite piece of music? Why?
My favorite piece is “Hills of Glenorchy.”  It is relaxing and anything that reduces my stress is automatically going to be a favorite of mine.  Gotta love 6/8 time.

• What are your 2 favorite things to do other than playing violin?  I enjoy recreational napping and spending time with my animals.  I don’t see them as often now since I’m gone so much, though.  My family has two quarter horses, Monkey and Leo.  Leo, the black and white paint, is my baby.  He’s taught me more about teaching and leadership than any person.  We also seem to collect cats.  I think the neighbors have started relocating any that are dumped in the neighborhood.  I’ve also got a black GSD.

• Do you come from a musical family? If so please tell us about them.  My family is fond of music but we’re not really that musical.  There was the one great-great- grandfather who was a fiddler and, apparently, I had a great-great grandmother on the other side of the family who was a concert pianist.  My sister played the piano and violin but that’s about it.

• Are you a member of any orchestra?  No, I’m not that disciplined.

• Do you ever perform publicly?  No, I’m not that good. 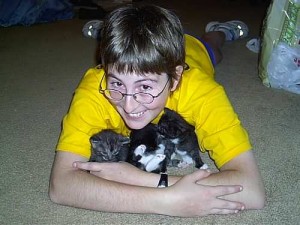 • What do you work with?  Mostly I’m a student.  I do a little tutoring as well.  I used to spend a lot of time working as an animal trainer (horses, dogs, cats) but I’m taking a break from it.  I don’t have the room to foster at school and I don’t have the time right now to work as a trainer.  I volunteered as a foster for years when I was an undergrad and also worked for a local rescue as a trainer and adoption counselor.  Although I learned how to train animals by working with horses and I fostered dogs, I prefer to work with cats.  Probably because a lot of people don’t realize one can train a cat.

• Would you please share with us information about your violin and bow and if you have several please tell us about them as well.  I have two violins.  The first is my heirloom violin which dates to the late 19th/early 20th century.  The fiddle’s early history is pretty fuzzy.  She was built by my great-great-grandfather and he played her in a band in Chicago during the 1920s and that’s about all we know.  After he died, she bounced around from family member to family member until she ended up being stored in an attic for decades.  We had her completely rebuilt when my sister started playing.
The second violin is the CVN-500 I won in the Fiddlerman ad contest.  It’s a great little fiddle and I derive endless amusement from how different it is from my other one.  The neck is both thinner and narrower on the CVN-500 so it’s tough to get my fingers correctly positioned on the strings.  It is, however, easier to use my fourth finger for those same reasons.  So far, I like to switch back and forth between the two when I practice.
As for bows, I have four right now.  One is a Coda Conservatory bow (carbon fiber) which belongs to my sister and is my current bow-of-choice despite its weight and length.  Two are the bows that came with the CVN-500 which do not impress me being generally stiff, thick, and heavy.  The third bow is the bow that was originally in the case with the old violin.  I don’t know it’s age or it’s maker as it is unmarked.  Of the four, it is the only one that is not usable at this time.  I’m working on that.