Posted on December 3, 2012 by Fiddlerman 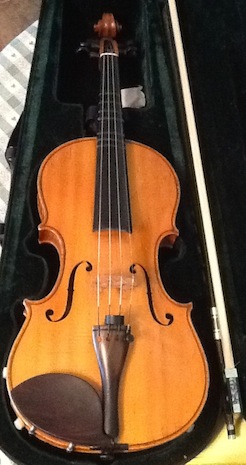 Please begin by telling us anything you would like to about yourself. Age, place of birth, residence, etc.
I am 41 years old, I was born in Norwalk, Conneticut. My dad was in the Navy stationed in Groton, Ct. We moved pretty much every two years  until 1984 when we landed in Merritt Island, Fl. Home of the Kennedy Space Center, Cape Canaveral Air station and the Naval Ordinance Test Unit. I am a Conneticut Yankee and was born “Under a wandering star”. I joined the Navy reserves right out of high school, went to bootcamp and tech school in San Diego, Ca. When I came back I went to culinary school in West Palm Beach, Fl. I traveled all over the East Coast working in a variety of restaurants.  I was married 16 years and have three wonderful kids.

What made you decide to play the violin?
When my daughter started the third grade, the elementary school was a “school of the arts” so strings participation was part of the deal. When we visited the luthier to rent a violin I decided to rent one for myself in order to show my daughter and practice with her. Of course life, work, disinterest gets in the way and I never really learned much.  Good Intentions, Id pick it up every once in a while and fool with it, but nothing serious. We ended up trading mine and hers in for a nicer Romanian model made in 2007 for her high-school orchestra. Fast forward 9 years, my daughter is doing real well with it, making her high school chamber orchestra. I got divorced (voted off the island!) in 2010 and while living with my parents, discovered my great grandmothers violin in the front closet. Needing a hobby to fill the void, I started back up with it using a book and self study.

How long have you been playing the violin?
I will claim 2 years as a serious pursuit. Since November 2010. 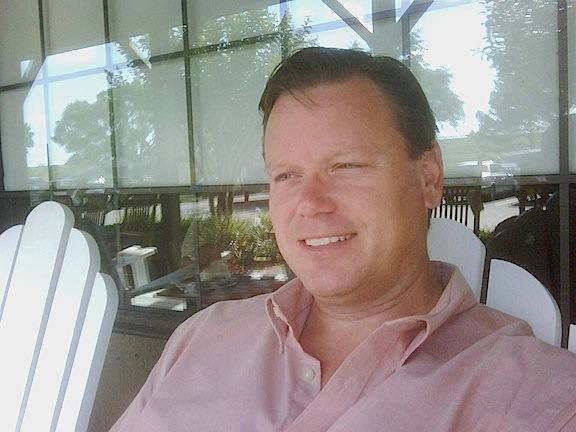 How often do you play? How long are your practice sessions?
I play everyday, probably 45 min to two hours. I often found myself playing at midnight just to unwind from work. I recently quit my job that I hated to practice more and focus on  really driving improvement. I will acquire another job after the holidays. My practices are broken up into several smaller sessions. I use a technique I read about to max my brains chances to learn as quick as possible. Its based on a blog post by the bulletproof musician on how to practice.  Each session is focused on one particular skill for improvement, always starting with intonation, then bowing and then from there its random depending on how I feel. Usually always variety of staccatos, slurs, arpeggios, string changes, doublestops, and now more recently shifting and vibrato exercises.

In your opinion, what’s your proficiency on the violin?
I am on the cusp of being an “intermediate” level player. I feel I need to polish up and learn a few more things to really feel solid about that. I suppose once I can consistently play the 2nd violin of my churches orchestra music I will claim intermediate status. Being self taught its hard to really compare since I’m sure its not the traditional path. Then I found the violin masterclass online website. They have a ratings system based on traditional learning, and according to that I’m still just a beginner. lol. The more I learn, the more I find there is to learn still. 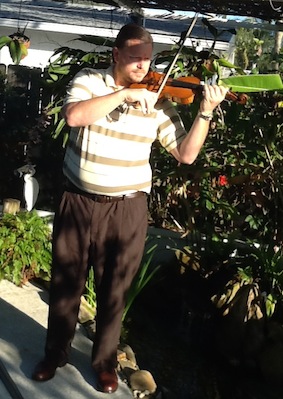 Picklefish playing in the garden

Your greatest personal experience with playing?
The transition from beginner to advanced beginner for me was thrilling. Being comfortable holding and bowing to the point where the fingerings in first position became effortless and harder songs started to get easy. That was awesome. Then teaching this 9th grader who never played before. Its been a year and Ive been able to see him improve and progress and that feeling that I helped is priceless. His life is forever impacted for good because of me. It has been an honor.

What other instruments do you play?
Play implies actually playing, lol. Ive played piano, trombone, clarinet, guitar, but have put those studies on hold until I have advanced more on Violin. I felt that it was too much for my grey matter to deal with. Still am what I would consider beginner level on all those.

What does music mean to you?
Music has always been in my life and my head. Its a terrific challenge for me, something I really enjoy figuring out. There is nothing else so inspirational, influential, international and accepted. All I have to do is mention music to a stranger and suddenly we are talking like old friends. It just brings people together. I love the bluegrass sound and the challenge of classical music. I also like movie soundtracks, the real orchestrated ones.

What or who has been your greatest influence?
My Mom, she has self taught herself to play several instruments over the years, flute, clarinet, violin, oboe and english horn. She has always played in church orchestras and community bands.

What are your goals for playing violin? Short and long.
My long term goal is to play well enough to try out for the Space Coast Symphony Orchestra and be that old guy everyone wants to take lessons from.
My short term goals all seem to lead along that path. One of which I am doing now, playing in my churches orchestra. The next step when I am consistent with their music, maybe next fall, is to be in the orchestra of The Cocoa Village Playhouse. A local community theater with live musicians hidden under the stage. Playing in public always terrified me until last year when I started hanging out at the park or in parking lots to drum up beginning students to teach.

What type of violin training?
The fiddlerman website of course! Initially I started with the book, All for strings. Then I progressed through books 1 of Suzuki, Oconnor, and Wicklund. I am currently progressing through the book 2s of each of their systems. I had two teachers each for two months. I was able to see that their style wasnt going to teach me much. (I am only moderately arrogant) I am interviewing someone younger for my next teacher this week, I will give him a chance. Since I know more about what is difficult for me, it will be easier to explain what I need from him. I want to know the cool secrets and tricks that impact the performance the most too. The 20% of information that gets 80% of the results.

How do you warm up?
Intonation training on the scale of the day, and bowing rhythm patterns is all i do, nothing special. Each day I work on a different key signature.

What is your favorite type of music?
I listened to country music most when I had a vehicle. Now its Youtube stuff Ive subscribed to which mimics my own musical goals. So finger-style guitar, flamenco and classical music, I like the music from Austin city limits and Woodsong, Songs of the mountain etc..

What is your favorite piece of music? Why?
Suo Gan from Empire of the sun movie soundtrack- hauntingly beautiful. I also like the Charge of Ft Sumpter from the Glory movie soundtrack because of its baseline.

What are your 2 favorite things to do other than playing violin?
Right now I cook, being a former chef for the past 15 years. Nothing especially fancy or complicated, I’m a comfort food kind of guy. I find comfort in Cajun, Caribbean, Italian, Hispanic, German….Well, pretty much any type. I made Shrimp Etouffee this week. My dad is from North Carolina and always smoked some kind of pig at least once a week. I witnessed the process of preparing whole hog BBQ, from barnyard to grill, more than once for a Navy picnic. So, I carry on his tradition and smoke something a couple times a week. Something being pork or beef or poultry. I also like to cycle. I used to ride long distances before I got married. Now I am getting back into it partly to lose weight and partly because its my only source of transportation. I rode 70 miles this week.

Do you come from a musical family? If so please tell us about them.
Mom always had us 4 boys doing either a sport or something musical. We all swam on swim teams growing up, she usually coached. Two of my brothers played trumpet in school, my other one played french horn. I guess brass instruments were easy, I played trombone. My younger brother who played trumpet ended up getting a degree in music and teaching Highschool band.

Are you a member of any orchestra?
My church orchestra

Do you ever perform publicly?
Walmart parking lot, Target, Local parks. wherever the people are. Church orchestra and thats it for now.

What do you work with?
A 1890-1898 hand made Louis Lowendal special copy of Dominicus Magnalana violin. I assume its a Spanish or an Italian pattern. The sticker says it was made in Berlin, Germany and Louis was only in Berlin for 8 years before coming to America. Its unusual feature is the bone nut. I don’t know what kind of bone, but its not common to have one, I’ve been told. Lowendall was one of a number of late-19th century pioneers of shop made instruments for the mass market, eventually connecting with Sears to sell through their catalog. I gather that at some point he went from being a master luthier in Dresden to the director of a big shop in Berlin, manufacturing for the mass market. Ultimately, I gather he moved to the U.S., which had become the major market for his shop made instruments. Values are troublesome because of his Sears connection but as a family heirloom, to me its priceless.

Would you please share with us information about your violin and bow and if you have several please tell us about them as well.
My violin originally belonged to my great grandmother on my moms side of the family. My mom and Grandmother both played it when they were growing up. I never knew it existed until I found it one day in the front closet. It was like it was waiting for me. My Moms side of the family is quite large and anyone of the cousins could’ve ended up with it just as well. I am very lucky.
I am currently using a carbon fiber bow that I bought from the local violin shop. I should’ve purchased one from the fiddlershop as it was less expensive, but I have also this shop local idea in my head. My original student bow weighed 66 grams and I outgrew it quickly. The carbon fiber makes all the difference.