Posted on September 11, 2013 by KindaScratchy 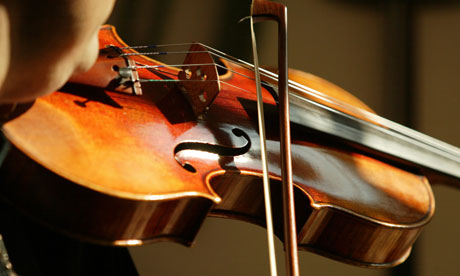 For about 250 years, from the mid-16th century to the late 1700s, a little town on the banks of the river Po was a music-making capital. It was the birthplace not only of Antonio Stradivari, the still unsurpassed master luthier, but also, arguably, of the modern violin itself and of a series of craftsmen who made some of the most beautiful-sounding stringed instruments known to man.

To this day Cremona, a town of unassuming proportions and northern Italian elegance, remains a hub of musical excellence, with around 200 violin-makers crafting new instruments for some of the world’s most exacting customers. Last year, their work was inscribed on Unesco’s list of intangible cultural heritage. And now, after years of waiting, Cremona has a showcase worthy of its illustrious heritage. Next Saturday, in a formerly disused fascist-era arts centre, a new museum featuring some of the most exquisite violins ever made will throw open its doors.

I'm a novice fiddler and mandolinist. I've played the guitar for many years and also play the recorder, fife, flute, and, more recently, tin whistle. I work in the communications field and, in addition to music, I enjoy photography, writing, gardening, golf and travel.
View all posts by KindaScratchy →
This entry was posted in Members Articles. Bookmark the permalink.