• Please begin by telling us anything you would like to about yourself. Age, place of birth, residence, etc.
Hi! My name is Keith Ferrer, I am 16 years old, currently living in the great country of the Philippines, I have wide sets of hobbies from the depths of physics to the greatness of music, I am currently taking a bachelor’s degree in engineering because of my fondness in robotics and electronics, I’m also independently studying physics, I like reading books, anything to stimulate my sense of adventure, I don’t like science fiction, even though I love science, I am never interested in sci-fi tv series, movies, etc. and despite loving electronics, robotics, and computers, I never liked computer games…just don’t know why :yum: .

• What made you decide to play the violin?
I actually forgot what made me want to play the violin, but I think it was because I wanted to play an instrument because I was greatly ‘jolted’ by some music at that time, before that, I never actually had an interest in music until I’ve listened to “old time” music, well, not actually old like classical era, but “60’s” music, the reason why I never had interest in music prior to that is probably because the music of my era sucks :yum: .
After that, I learned how to play the piano, and after a while, I heard Beethoven’s symphonies which became my immediate favourite, gradually, my reportoir in piano turned from 60’s to classical, symphonies to chamber music, chamber music to solo, that’s where I had an interest in violin playing.
I then planned on buying a violin, I learned that violin tutorials are kind of expensive, so I thought of online lessons, searched youtube and then find Fiddlerman’s youtube channel, it gave me hope, to learn how to play the violin for free anytime I want, I then asked my parents to buy me a violin, they were reluctant at first because they wanted me to play the guitar to “follow modern culture”, but I really wanted to and asked them again and again untill they agreed, then I bought my first violin, learned how to play, and the rest is history :slight_smile: .

• How long have you been playing the violin?
I have been playing for about 1 year, 3 months, 18 days, 8 hours, 50 minutes, and 09 seconds at the time I am writing this. well, not literally since I can’t literally play for that long without stopping….you get the point :wink: .

• How often do you play? How long are your practice sessions?
I practice and play at any time per day, but approximately, I practice about 3-5 hours a day, sometimes longer, but it depends on some situations, I practice by playing a piece in pizzicato at night because everybody’s asleep at that time, I don’t use mute, I don’t like the concept of it, I sometimes play to elevate me from stress.

• In your opinion, what’s your proficiency on the violin?
My proficiency….hmm, I am a beginner, I am still learning, I know the fingerings and all, just need to master my intonation, which I am clearly not that good at this time.

• What other instruments do you play?
Besides the violin, I can also play the piano, I learned how to play it all by myself, same as the violin.

• What does music mean to you?
For me, music is something divine, like the language of God, it’s a perfect beauty, one of the greatest achievements of humanity.

• What or who has been your greatest influence?
In music, influences vary from different eras, for popular music, I am greatly influenced by “oldies but goodies”, e.g the Beatles, and in classical, I am influenced by Beethoven, Mozart, Liszt, etc. and for the solo violin; Fiddlerman (never gets out of the list), the members at the fiddlerman forum, Ole Bull, and specially, the one that influenced me very much, Niccolo Paganini, his music is like magic without magic!

• What are your goals for playing violin? Short and long.
My short to term goal for playing the violin is being good at it, of course, when I play, it sounds like thousands of dying witches riding dying horses :yum: , so I want that to be improved. My long term goal would be a soloist, that would be nice.

• What type of violin training?
I’m an autodidact, with the help of the internet (specially fiddlerman) and books, no professional training, encouraged by a lot of friendly members here at the fiddlerman forum.

• How do you warm up?
Hmmm…. I first play a piece that I know for warm ups (mostly Paganini, not yet that good though), then practice the fingerings, I rarely actually practice scales, I should though, it’s a bad habit to not play scales.

• What is your favorite piece of music? Why?
Hmm…. Any of Paganini’s music, he is like iconic! His music is like impossible, he’s an example of how impossible things can be possible, his music is like an entire era per se. I was astonished when I first heard his music, breathtaking, macabre, with the mix of italian romanticism, his music changed the perception of every violinists.

• What are your 2 favorite things to do other than playing violin? 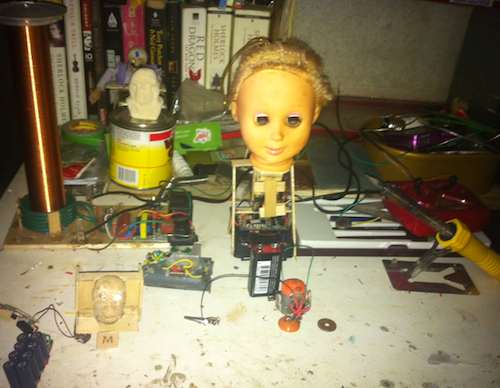 Oh there are a lot, but the two things I mostly do besides playing the violin are making robots (or any electronic stuff), and learning stuff (reading etc.), currently, I’m venturing into classical and quantum mechanics (specially the maths behind them as encouraged by RosinedUp). And creating some more rational interpretations for Quantum mechanics.

• Do you come from a musical family? If so please tell us about them.
Never know anyone from our family that is musical, my father can play the guitar (but of course, many people do), and my mother can play the piano, but they’re not that into musical stuff.

• Are you a member of any orchestra?
Nope, wish I did though :yum: .

• Do you ever perform publicly?
Not really, no…..but I practise with my siblings around….so it’s still public…

• What do you work with?
Hmm….not working yet, still at school, well, I’m working hard to graduate :wink: .

• Would you please share with us information about your violin and bow and if you have several please tell us about them as well. 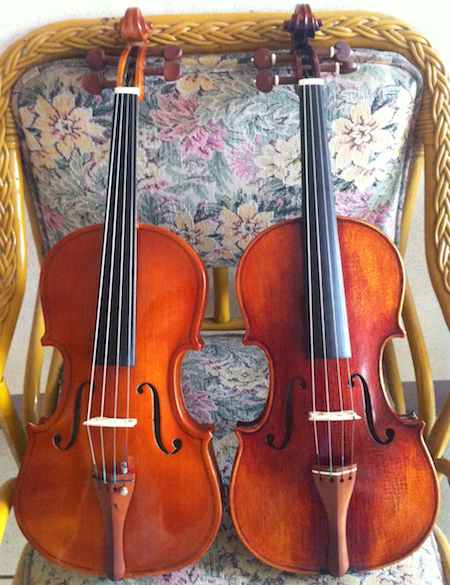 My first violin was a cheap one, but I loved it and it worked out for me, I named it “Nosferatu” for some crazy things, and after some time, I bought a new violin for an upgrade, and gave Nosferatu to a friend who wanted to play the violin (he’s also one of the first people who introduced me to the violin even though he doesn’t have one ). My current violin is a copy of a Guarnerius del gesu that I have bought on eBay, it’s a wonderful one, I love it very much, it has a huge sweet sound, lovely crafting, it’s awesome! I’ve also bought and replaced it’s fittings with boxwood that has bone trimmings, placed the pegs (added a hole and adjusted it to fit with the pegbox without any special instruments, more info here: https://fiddlerman.com/forum/fiddle-violin-repair-making-and-set-up/new-fittings/) also carved it’s bridge, and carved and attached a new nut made of bone, just to gain some aesthetics, I am loving it so far, I have not encountered any problems as well.
The strings I use are steel, from the begining until now, except when an awesome fiddlerman member sent me a set of synthetic core strings, it was so awesome, the sound was greatly improved, but not all lasts forever, so I’m currently using steel.
My rosin is a dark one, it’s brand is Alice, made in china, it’s cheap,  but it’s the best I’ve used so far, doesn’t make powdered residues a lot, and it makes the sound of my violin smooth.
My bow is just a cheap one, it came with my 1st violin(the bow that my friend uses is a bow that I’ve bought, same quality), but I’m still using it, it’s great, no problems so far, I clean the hair with alcohol for once in a month or two, the bow that came with my current violin isn’t that great, but it has a nice lapping though, fake whalebone, but it’s heavy, so  it’s hidden somewhere and I rarely use it.