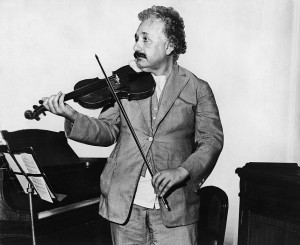 Though still relatively rare, left handed violins are becoming more common and gaining popularity. Violinists for centuries have been using violins that are held with the left hand and bowed with the right. Great violinists and fiddlers on all levels, both right and left handed, have been doing it this way without much discussion. A left handed person playing the violin may feel advantageous having a fingering hand with more dominance, power, and dexterity while a right handed person playing the violin benefits from dominating the bowing hand and arm. Both hands require control and neither can act without the other. 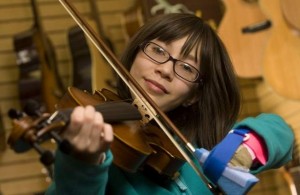 You can’t just change the order of the strings!
A left handed violin is similar to a normal violin, but built to be fingered and bowed with opposite hands compared to the traditional violin. With the left handed violin the instrument is held with the right hand resting on the right shoulder while the bow is held by the left hand. A traditional violin can’t be converted to a left handed violin by simply changing the order of the strings. The violin is either constructed differently, or reconstructed with changes to the top, bass bar, neck, fingerboard, nut, bridge and peg holes.

Construction of a left handed violin
A left handed violin is a mirrored copy of a right handed violin and most often built that way from the beginning. Changes to the instrument are made to accommodate the heavier gauged G string on the right side and the high strung E on the left. The bass bar should always be located under the G string leg of the bridge while the sound-post under the E string side. Since the order of the strings are reversed, the position of the peg holes must be altered to accommodate this change. The E string peg hole is always set further from the hand in order for the hand to clear the peg when playing the instrument. Individual string lengths, as traditionally made, are proportioned to the total distance from the pegs to the tailpiece which also determine the location of the holes. Bridges are cut, and shaped, so that the E string comes closer (lower) to the fingerboard, to ease pressing the string down to the fingerboard, even in high positions, despite its extra high tension. The G string (lowest string) vibrates wider and should not be set too close to the fingerboard due to the risk of the string touching the fingerboard. Finally, a special modified chinrest that mounts on the right side (looking down the top from the back to the scroll) of the violin, with an inverted scoop and shape, is needed.

Conclusion
Whether you are right or left handed, always consider learning on a traditional violin first as the benefits to this instrument might outweigh the drawbacks. Finding great quality traditional violins is a breeze compared to left handed violins. A left handed violin played in a group not only stands out, but becomes somewhat impractical. Violinists in most cases sit with the top of the violin angling towards the audience, which becomes impractical when playing with violinists holding the instrument in the opposite position. Practically, the left hand violin player should sit on the opposite side of the stage. The musically favorable way of playing, using the same (up or down) bow directions, will not correspond visually if right and left hand violins are combined in a group. In these cases a risk for bowing collisions is also greater requiring greater distance between players.