A question on score notation....

A question on score notation....

Here's a thing - for a lot of tunes I "just know" I'm happy to play by ear.  I was recently thinking about "My Love She's But a Lassie Yet" - but for the life of me I just couldn't home-in on the B part.  I can't play much right now, so I was scoring it up in MuseScore, largely from memory, and I got something pretty accurate to what I hear in my head.  But, being kind-of-stuck on the B part, I did some googling.  And I found a scored-up version.  Curiously, the A part was pretty much identical to what I had scored- and the B part - well, of course - it turned out not to be THAT difficult after all.

Anyway - cutting to the chase - it's in 2/4 time.   But, when you look at the score I found, you'll notice some bars with changed time signature - I have added comments in the score sheet - bars 0 and 9 are effectively 1/8, and bars 8 and 17 are effectively 3/8 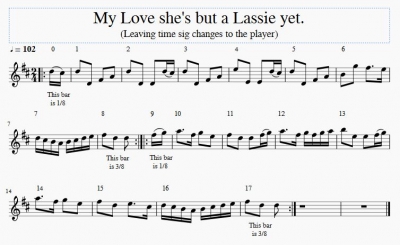 Now - as an amateur musician, this did not stop me at all -it is obvious what it means without actually indicating the changed time signature.  And, looking at bars 0 and 9, the two 1/16th notes are like a kind of pick-up / lead-in - and - because of the repeats - the 3/8th bars 8 and 17, fit perfectly.   My original scoring of part A gave effectively the same result, I had just done it differently.    Had I scored it this way,I would have been tempted to show it like this - 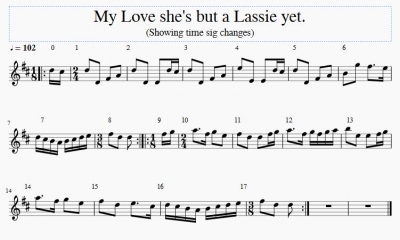 I guess my question is - how common is this - just leaving such signature change to "be understood" by the player, or, if one wanted to be truly pedantic about it, the time sigs could be shown - as above.

Just wondering what you think about this - as I say - it doesn't worry me in the least, it's obvious what's intended, and because I don't use sheet much I guess this was "new" to me to see it done this way (without indication)

It's a nice little tune - here's a link to my musescore version playing it....  My left hand is nearly healed - I'll be picking up the violin again in a few days time.... yayyyyyy !!!!  feature=youtu.be

I don't think any of those notated version is correct.

I've never seen a pick up (or anacrusis) shown with a different time signature, nor the final bar for that matter.

The correct way to notate the repeats imo would be to show a first time bar at the end of each section (to include the last bar + pick up) and the repeat would go back to the beginning of the first complete bar (i.e. after the pickup). The second time bar would include last 3 notes and the pick up to the next section (where there is one).

Absolutely, Jim - as you say - and that's exactly how I did my own version originally.

Oh - after all that - I forgot to post my own arrangement (with none of the funnily timed bars, I might add  !) - so here, for your pleasure is a nice wee Scots tune - enjoy.... 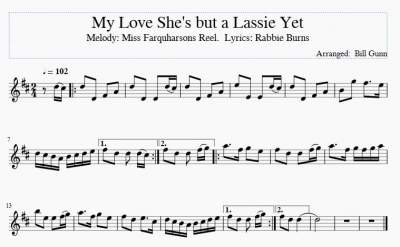 You realise you've got me playing this now, don't you.

Actually, the music is correct.  The repeat bar is put in the middle of the measure because the composer didn't want to repeat the entire measure.  This is actually quite common, in my experience, with Irish music.  It took me a little while to get used to it myself.  If you notice, the intro isn't a full measure - there's only 2/16 notes in there.  Go to the first repeat bar and you'll see only 3/8 notes before you're supposed to go back to that first half measure; when put together you have a full measure.  It's a little confusing, but this happens when there is a "pickup measure" to start a song.

Likewise, if you look at the measure with the repeat bar, you can tell (if you remove the repeat bar) that it's a full measure.  The first few times you see it, it looks strange, but you'll get used to it.  The thing to remember is that repeat bars normally, but don't always, mark the end of a measure.

... that's interesting @iBud - as I say I don't use sheet much and had never met that type of notational usage - although of course I pretty much understand it.

iBud said
......The thing to remember is that repeat bars normally, but don't always, mark the end of a measure.

I had never thought about it specifically like that - so yes - sounds like that's the way to look at it rather than assuming, or implying a change of time sig... thanks for the feedback !

For your "entertainment" - a quick cut of "My Love She's but a Lassie yet" played while on holiday in Braemar - on a truly glorious day in early November, to the wildlife (ducks in the pond in the distance, the occasional greylag goose (which really should have headed further south by now) and wild deer - all of which I should say ran for cover...)

Good job, Bill! And I'm jealous of your bravery to play outside... I want to do that but haven't got up the nerve yet.

@damfino - thank you !   Playing outside is absolutely awesome - not talking about specifically  busking or playing to an audience - but if the place is "remote enough" you get the time to practice - and - when someone does appear - like a hill-walker / trekker - then almost without exception they'll engage with you in conversation, listen to a bit, maybe take a photo / video, have a chat, share a coffee from their thermos-flask and so on.....  it's all good - I have only ever meet "good-people" on the hills - and when they leave, they continue their trek with a smile on their faces, and a tale-to-tell about when they met this crazy Scotsman sporting a http://www.fiddlerman.com cap !!!

My "worst" (in truth, really one of the best) encounter was with a Japanese couple visiting Scotland - we actually got on REALLY WELL - but it was a real struggle with their limited English - not to mention my non-existent Japanese, which made me feel truly inadequate !!!! ROFL....   Unfortunately, I'm sometimes on my own, and don't have anyone to video these occasions, which is a shame in some ways....

Around here there aren't too many remote hiking areas. There are amazing shale cliffs that I would like to play near, but there are houses on the top of most of them, lol, so when I do, I will have to ignore that fact. South of here you can find more remote trails, as long as you go on the off season. One place I would love to play, it's about a 3 hour drive south of me, it's called Ash Cave, it's not really a cave, but the formation creates a natural amphitheater. You can stand on one end, and speak in a normal voice to the person about 100 ft away from you.

Here is a picture I took several years ago there... If you look behind the waterfall you can see a set of steps, I've had my brothers stand up past those, and myself standing where I took the picture, and you can just talk to each other. It really is cool. But it gets a lot of tourists there in the summer and early fall. If I could play anywhere, it would be there, lol.

That picture is so cool Mandy. Makes me want to go there.

Did you add an effect to the picture?

@Fiddlerman I've never been good at, or patient enough to do much photo editing, lol. This was a long exposure so I could get the waterfall how I wanted, and I think I probably boosted the contrast and sharpened it. Everything there is an orange sandstone, so the sand on the ground is actually that orange, and it was raining so everything had a nice little glow to it from the clouds and rain

My little dog was very orange at the end of every hike, lol.

But that area of Ohio is beautiful. I think it is probably my favorite place in the state.

@BillyG thanks for sharing your music "theory" stuff and for all who answered up. We are always enriched by these conversations.

and What a nice little song Bill.  I love.  Love to see you play also

@damfino that is one pretty place.    Seems just amazing.