So I went to the local Violin store here and tried out a few acoustic violins.... And I fell in love with one in particular .. it was the first violin I saw in the store... and I tried about 8 or 9 I think. (The guy just kept bringing them to me) It was a smidgen out of my price range and so he didn't bring it to me but I could not take my eyes off of it. And so I asked to play it. It was a consignment so they were able to work out a deal with the seller so it was in my price range. the tag on the inside says B. ruggerius faciebat cremonensis 1672..... I tried to google it but only came up with forums about Strats and no real info on the B. Ruggenius....

Does anyone know anything about these.... It is more rustic looking than the picture shows. It actually looks quite a bit darker in life.... I think the flashed drained most of  the life out of the violin....

anyway it has a really nice solid piece back..... any info would be great! 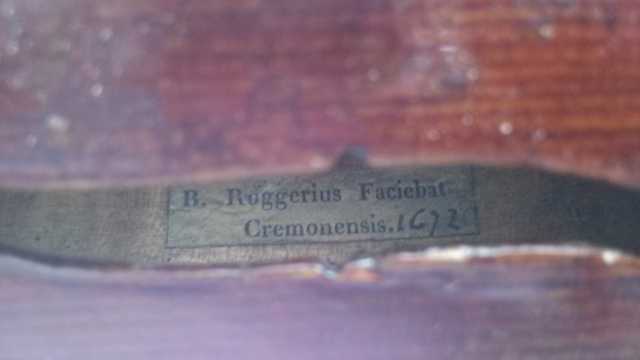 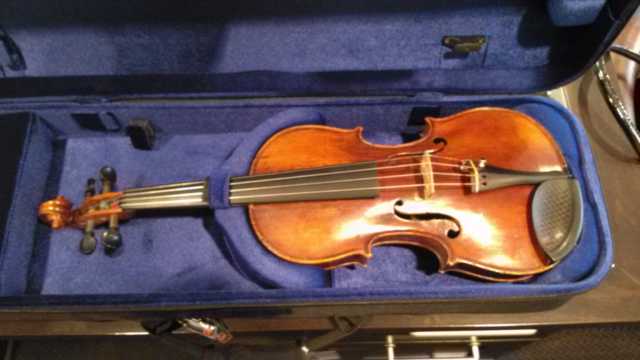 DOES THIS HELP AT ALL?

RUGGIERI, FRANCESCO
The first of a family of makers at Cremona. Not to be
confused with the Rogeri family at Brescia. Worked at No. 7 Contrada Coltellai.
Instruments dated from 1655 to 1718. Celebrated pupil of Nicolò Amati -
instruments built on the lines of that school so long familiar to us, but also
with several slight differentiations and modifications combined and embodied
with skill. Slightly larger model (somewhat similar to that of A. and H. Amati)
than the prototype, very graceful outline, arching very slightly more elevated
and sometimes prettily “ridgy”. Rather short and open sound-holes, but beautiful
art work. Flatter arching attracted him after 1670, also a trifling increase in
breadth, which perhaps brought the outline less completely graceful - middle
bouts long and rather deep. Changed and lengthened the sound-holes, a sort of
compromise of the Amatese and Stradivarian, very delicately executed, apparently
a new idea to him for brightening the tone. Scrolls also meritorious, especially
noble volutes. Broad and faultless purfling, the natural fruits of patient
craftsmanship and reverence for beauty. Successful in choice of belly wood,
backs generally of the prettiest material, invariably cut on the slab. Varnish
(never too much or too little of it), varies. Sometimes a rather dull deep
orange shade, also a more brilliant and richly transparent yellow-orange, udder
which the wood lies in all its glory, and a particularly fascinating ruby-red
(frequently found on the later specimens). And, what a delicious tone issues
forth! A tone as notable for richness of mellow sonority as for penetrative
power. Productions show that his mind was not stationary or restricted to the
guidance of predecessors, but in accepting broader views, he never allowed them
to become warped by undue ambition or subdued into timidity. Specimen (dated
1665) body-length 35.1 cm.; upper bouts 16; lower 19.9. Johann Strauss (the
waltz King) played on a fine example. Found its way to America, 1920. Another
(dated 1672, formerly owned by an Epglish Duke, and acquired by Mr. Sheridan of
Liverpool, 1928) a fine specimen, body-length 14 inches, varnish of glorious
reddish hue, and the back of the scroll gleaming like tortoiseshell.
Comparatively few violas, but those few have remarkable qualities. ’Cellos (said
to be of greater number than the violins) generally of very large proportions,
backs sometimes of poplar wood, tone considerably penetrating and sonorous,
though workmanship is not always refined. One specimen (dated 1718) is a
magnificent example - successively owned by three virtuosi - Jules Delsart, Léon
Jacquard, and Boris Hamburg - Stradivarian outline and sound-holes, rich
varnish, and a tonal quality of brilliant
purity.
------------------------------
Francesco Ruggieri detto
il Per,
Cremona, 1673
-----------------------------
Detto il Per - named the
father. Picolelli says it signifies a provincialism of the Italian word “pero”
(pear-tree). At any rate, it distinguishes this family from the Rogeri. Various
spellings on some labels - Ruger, Ruggeri, Ruggerius, and Rugier. Occasionally
he wrote the label. Hill & Sons state that they have seen two specimens
labelled -
--------------------------
Francefco Regeri
Il per Cremona
1694
--------------------------
Violins, £1750; ’cellos, up to £2000,
1960.
Trade violins supposed to represent the style of Ruggieri, and bearing
facsimile labels, frequently do unwarrantable injustice to his model by undue
breadth, thick edging, arching too full, and a comparatively small scroll.

shows a violin that sold at auction with some of the names you have inside for 525pounds. Perhaps this is like yours, you might measure and see if it is...but for the most part you're stuck with it now regardless of the value.

I personally would like a sound sample to analyze...

ahh, this must be the violin that you were talking about of the shoutbox! she's a beauty! the money was totally worth it!! i can't wait to hear it!

anyways, this is what Francesco Ruggieri's label looks like:

seen this quote about the B. Ruggerius on another forum:

"The date on the label in your violin is 1617. It is actually a German violin, made around 1890 - 1920, probably in the town of Markneukirchen. This label was commonly used by the factories there on violins they made for export to the US. These violins are still considered to be good student instruments.

If your violin is in excellent condition, its current retail (replacement) value is approximately $800 - $1,000. If you were to sell it privately, you could expect to get 50% of that amount. A dealer will only give you about 30% of the retail amount."

this quote came from an auction site:
"A 19th century German violin, the inside with label 'B Ruggerius Cremonensis, anno 1614 (final part of date indistinct), back measures 14 inches excluding button, of good brown patina, with bow with mother of pearl detail, in hard black case." 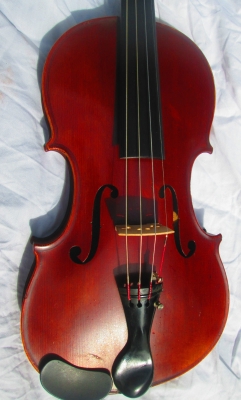 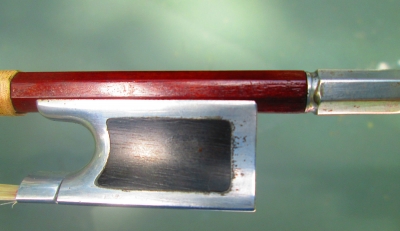 I have yet to study the violin bearing this label. My first impression is highest quality French work, but I could be wrong. I actually bought it to see what the bow was about. It is nothing like anything I've ever seen, I think.