Generational Differences – What do you think?

Generational Differences – What do you think?

I guess I’m feeling old.  Over the last week, I’ve been encountered several people who have expressed thoughts on generational differences – examples here on the forum regarding music:

I had a conversation with my violin teacher about this & differences in general (not just music-related).

I thought of this video (I thought maybe I came across it here on the Forum, but I’m not finding it, so I’m posting it here) of kids confronted with a rotary phone.  My parents had a rotary phone—the phone company had to pry it away from my mother for her to give it up.

How about you all?  Surprised by what the young ones don’t know?

Or you young folks out there?  Surprised by what us older folk say or do?

I’m a Gen X’er, so I think people younger than Gen X are young—but I guess that’s a perspective thing 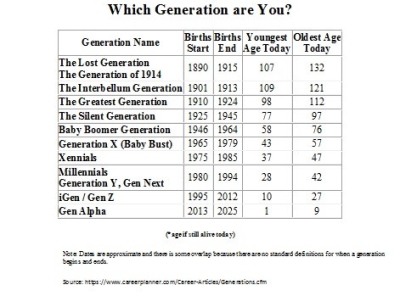 Chart is from this site that also has some description of basic experiences of the different generations:

in the 70's we had 1 phone in the kitchen/dining area...mom was happy it had that longer coiled reciever to base cable.   phone was some weird green color and was mounted on the wall...rotary.

When my wife and I got married in 1978 we moved out into Tipton County and had a 3 person party line had to know your ring, or you could just ease drop off your neighbors phone calls.

I remember my Grandmother had one of the heavy black rotary phones (not on the wall) - the kind you had to use a pencil to dial with, so it didn't hurt your finger... rock solid while dialing!  Party lines, toll calls - omg, the dreaded phone bill!

People used mothballs... or worse, and everything my Grandmother had that was electrical, used cords that were covered in cloth braiding... come to think of it, we had some, too!

I remember how excited I was when I got a record player... then later a radio & much later... a cassette tape recorder!

Only 5, sometimes 6, Black & White Television channels (one was PBS)... and broadcasting shut down for the whole night!

Not gonna tell ya what I remember gas prices were. 🤫

I think there really is something to the idea of "Xennials" as a mini-generation caught between two very different generations. I remember going from rotary phones as I started grade school to broadband internet by the time I graduated from high school. (And my family was not unusual at all: we got our first touch-tone phone the same year that 50% of American homes had it, and got our first broadband connection just one year before broadband was in 50% of American homes.) We Xennials didn't grow up with the internet, the internet grew up with us. The vast majority of us don't remember a time before personal computers were commonplace, but we were also the last to have a large portion of our childhood before the internet was widely used.

I think it shows in the way Xennials interact with technology compared with younger generations. We got comfortable with computers at a time when most things on computers were text-based, and the default way of operating a computer was with a command prompt. (I still prefer to use a keyboard over any other any other input device.) We also tended to have big, detailed manuals for all our software, and did a lot of computer repair and hardware upgrades ourselves. I get the sense that, apart from those who go into tech work, younger generations aren't forced to learn the nuts and bolts of computers the way we had to. I've been surprised at how many people just five years younger than me, who in many ways seem more comfortable with computers than I am, have been confused by what I would have considered basic computing knowledge.

At the same time, younger people seem to be much quicker to pick up on things without a manual. I sometimes get confused by the wide array of text-free icons that appear in present-day software and some present-day websites, with not much explanation of what everything does, and a lot of the ins and outs of using touchscreens aren't intuitive to me. I'm definitely not comfortable using a tablet without a keyboard. I have friends who recently moved to Oregon, and it turns out their new neighbor's daughter is a musical prodigy who just composed her first symphony at 13. When they described how quickly she wrote the symphony on her tablet, my jaw dropped -- because I wouldn't be able to physically write the music that quickly, either on paper or with notation software, even if every note was already in my head! (I wasn't as surprised by how fast the ideas came, because I've known people in my generation for whom the limiting factor in how fast they compose is their ability to physically write the music.) Even if equipped with the same technology, I suspect I would not be able to write nearly as quickly, just because the thought processes involved in using newer software are so different.

I went to a great High School.

We had a computer... a one trick pony that ate punch cards!

I held out for Star Trek - pretty much there, now... just need warp drive - AND, 'Alexa' to understand what I say, better. 😎

...keepin' the survival training manual handy for the Kids.

ELCBK said
I went to a great High School.

We had a computer... a one trick pony that ate punch cards!

But quite a while ago I caught a TV programme where kids were shown that records were "what your grandparents used to listen to music on".

And any hardware like CDs is already obsolete with young people. But that's not really about the generation gap, it's about milking young kids for money they won't save, because they can't afford to buy realty, so instead they fritter away money on pay-per-listen and pay-per-view. Bill Gates was advocating that bandwagon 10 years ago.

I've made fun of this, but I do worry about my grandkids - because I saw a few disturbing trends start even while my Daughter was growing up.

I think it's important as technology advances, to examine our personal responsibility for how we use it.

Parenting is the most important job in the World - parents & grandparents must accept the greatest responsibilities for children as new technology is changing society.

As a grandparent, it becomes increasingly evident that we need to not only protect the kids from social media and information traps, but really insure they are mentally primed for making independent, healthy decisions.  It's also extremely important for children to learn there are always healthy ways to solve problems - we need to instill respect, accountability and strengthen understanding of how our society needs to function.

Technology is fabulous - creation & innovation should be fostered.

It used to be the burden of younger generations to try to help the older ones keep up, but technology has become progressively more 'user friendly' - maybe we are losing important skills and reasoning in the process.

...I will still make sure all my grandkids learn how to tell time and direction by the Sun & Stars.  I will also make sure they understand how a mechanical clock works, besides learning how to read a digital display or how to program an A.I. voice.

Yes, but I never knew anything about stars, and I'm sure there's plenty of 19th century technology I couldn't deal with. Could you have a telegraph conversation with someone?

Perhaps the problem is not kids and technology, it's kids and people; and kids, while they are learning about technology, learn too little about people.

Of course I was taking chatrooms as the topic, which I now realise you weren't.

On one hand, it brings great joy knowing i grew up in the late 60s and the 70s(graduating in 80) because we used our imagination when playing because there was no computers or cell phones, Yes, I too remember party lines and our phone number was simply 4 digits. You could not drag us inside until we HAD to go inside, when mom would ring the cow bell on our front porch for supper. We played on our stilts, bike rode all around town, three legged races, all types of tag(such as TV, frozen tag), fishing, kick ball....I remember block mothers and clip on roller skates. Very enjoyable times because life was simple. We respected each other and adults and it shows today for the most part. The pitfall or growing up in that era? Getting old, but still trying to do the same things we did as teens. But I will say that not having had a cell phone for about 5 years now is a true delight. I spend my time with Thomas in public knowing exactly where he is at all times, we talk while walking, sight see rather than staring and replying on a cell, sit and eat while enjoying each others company and he never has to wonder if i am listening to him.

Rotary phones. LOL
I remember a billboard ad that struck me as ingenious already 20 years ago in Sweden. It said, "Remember when cell phones were only used to make phone calls?"
Probably not worded like that, and the ad was for Ericsson phones before even Sony-Ericsson I believe, but it suits todays phones perfectly.
My phone has 187 apps other than the apps included on iPhone to begin with. 🤣

But the sad thing is, all I want to do with my cellphone is make calls.