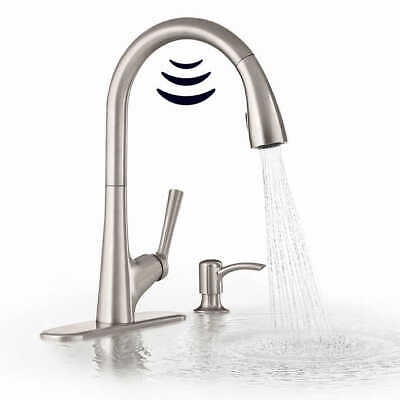 Being married to a bacteriologist is interesting.  She considered the kitchen faucet as suspect #1 if either of us felt under the weather.  When, at last, I could no longer repair our existing faucet, she demanded we obtain one that operated without the need to touch it.  I am glad she did.

I purchased it for about $120 delivered.  I installed it easily without the need for any special tools.  It came with a battery pack (more on that later) but I made an additional purchase and obtained a “wall wort” power supply.  I also purchased a spare solenoid assembly for $13.

It operates flawlessly and my wife is very happy with it.  I am convinced that the faucet may last for many years.  The mixing valve can go for weeks without a change in setting, so wear is minimal.  The wand is integral to the spout, so there is no need for an o ring seal on the swivel feature (it was that seal that put an end to our previous faucet).  In short, the “clock of obsolescence” might be missing here.  Time will tell.

It does have a failing.  In the event of a power failure, you need to take a coin to by pass the solenoid valve so that it will operate as a normal faucet.  Or you can keep the free battery pack and substitute it for the power supply (which is what I plan to do).

Ok but how is this a non-touch faucet?

And how much do they cost?

Funny. My daughter has one. We do not. She, her then 1 1/2 yr old daughter and husband visited last Jan 2018. We were holding our granddaughter near the sink to wash her hands after having grandparents fun (😂). Our granddaughter kept reaching and touching the side of the faucet. We didn’t get it at first. Then we remembered that they have one of these at their house. It was so funny. She was trying to turn the faucet on. She did this the whole time they were visiting. She even did it when we held her up to look out the window at the snow, they do not get that where they live and she never saw it before.

This faucet is very handy. My daughters are excellent cooks, did not get it from us. It is handy for them with this faucet because they can just touch the side with a finger tip and the water turns on. The other daughter got one after she visited the the sister with the little girls.

It may not be exactly touch free, but it is real handy. I am not getting one, but it is very handy for them.

@Pete_Violin and others.  You put your hand under the curved part of the spout and it turns on.  No need to touch anything.  It can be fooled by the presence of steam.  You repeat the process to turn it off. If also begins a timer when turned on, and will shut itself off in a few minutes to prevent water waste.

As stated in the original post, the cost was $120.

Ok, that is a little different than my two daughters’ faucets. Theirs has to be touched, ever so lightly to turn on or off, or you have the option of the actual handle being pulled. The touch can be with the arm, finger whatever. My older granddaughter thought they all worked like that. I suspect her little sister now thinks that, too. The older one no longer assumes they all work like that. It was so funny watching her do that and see her face. Well, it was just fun seeing her face in our house!

I think the proximity one would really be bad for me. I am constantly fussing with things in the sink and that water would constantly be turning on.