Why your User Name :)

Why your User Name :)

Very cool stories here. Mine is the same as an old email address I got years ago. I am intrepid, ie. Fearless. And of course I am a girl. Used it a few time for work and then changed over to a much more staid gmail account that just has my name.

On another note I too played Zork on an Apple 2e and I learned how to program with Fortran on punch cards. All good experiences ?

intrepidgirl said
....
On another note I too played Zork on an Apple 2e and I learned how to program with Fortran on punch cards. All good experiences ?

Ahhh, but did you ever program a PDP8 via the console switches ?    And toggle in one of the shortest self-replicating (but essentially pointless !) programs I have ever seen (hint, it was a single instruction...

EDIT:  Aha, old age is a-knocking-at-the-door - I get forgetful - I had to google-check it -  the self replicating single instruction was on the PDP11, I beg your pardon....

Ahh the good ol' days (hrmmp). In 1966 I was taking FORTRAN 4 programming language course. We used the school (North Carolina State University) IBM 360 mainframe computer and submitted boxes of punch cards through a window to the operators. The textbook we used as written my McCracken (a common text at the time) and it had example code in the back. One of the examples was to plot (on tractor feed computer paper) a damped sinusoidal pattern. I punched the appropriate cards and submitted it. The next day I was handed nearly an entire box of the paper (that wide stuff they used to use with different colors for each line)! It seems the McCracken example damped the sine wave down to nothing, but failed to have a stopping point. That's my first experience with the "endless loop"

Never programmed via toggle switches, did do some wire jumper coding back in the day.  Can't remember the hardware, the 'main big computer' was a 360, where the card reader was the input queue and the line printer the o/p queue.

Did manage a functional conversion (ie we wrote a new system) of a pdp11 basic system to ibm 370 dos VSE Cobol/Cics in the 80s.  The lead PDP technician was offered free IBM training to learn the mainframe, he declined, something about not wanted to learn that ancient stuff.  Last I heard he was banging nails and I am still making a decent living off of that ancient stuff.

For fun, I took over the old Commodore OS (using z8080 assembler) and did my own i/o routines, down to setting interrupts on the raster to generate more than seven sprites on the screen at a time.  FOR FUN

Today, Cobol/CICS/DB2 (sql for you non mainframers), STILL using the same editor that we had in the 70s (TSO).  I worked as a consultant for decades in the NY metro area prior to getting my current f/t gig.  STORIES, man do I have stories (like the bank, in the 80s, still using cards to interface two systems (yup, one punches and the other reads)).   Hey, it paid to raise my 4 kids and fill my 401k, so, I can't argue.

To play a wrong note is insignificant;  To play without passion is inexcusable.  - Ludwig van Beethoven

My username is RockingLR33. Rocking LR is actually my family's ranch brand. I think when I signed up either the name was taken or maybe i was in a habit back then but 3 is my favorite number so tad da...a user name was born lol.

Most people thing it stands for Rocking Girl...but alas that is not the case hahah. This is what Rocking LR looks like as a brand on a piece of saddle leather.

edit: helps if I upload the picture hahahah. 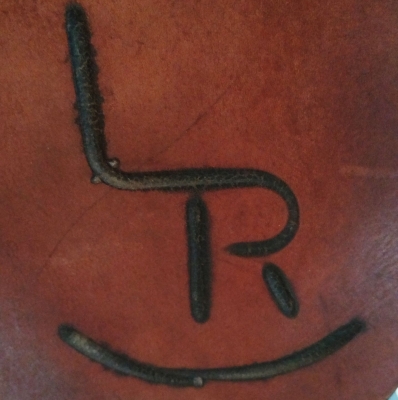 I use 33 in some of my usernames too, for a different reason. 33 was my shirt number throughout my college soccer career. I always wore the #13 shirt before that, for my birthday, but when I got to college, I was a freshman and the team captain already had the #13 shirt, so I took 33 and stuck with it. I guess it was also a case of something else being taken already, just a different context.

But my username here is kinda boring, first name and last initial.

A username you might see me using in other places is andrewhcit, which is my first name, last initial, and my undergrad alma mater (California Institute of Technology, a.k.a. Caltech).

When I took up the fiddle 3 years ago, I was drawn by the exuberance of Old Time music. My southern grandmother was named Nellie and fiddle music made me feel young, hence, NellieGirl. I’m not young, and both my day job and real name, Carole, are sober and staid. And I play mostly Scottish fiddle, which is more fun than my job. It turns out that “Nellie” was an 18th - 19th century Scottish name as well, and yes, I am a girl when I play my fiddle. Like many others on this chain, I once wrote simple statistics programs on punch cards. At heart I am indeed “NellieGirl.”

Well I believe my generation really made using acronyms for everything a common day item,  and now it's has filtered in to every thing you read, which I really don't care for but its a part of every day Life now in, any walk of life in the digital age.

So Mark is just my given name.

Kinda boring I know what can I say.

damfino said
Saw Pierre mention this thread in another post. Never saw it, so thought I'd search it out and give it a bump........

I'm glad you revitalized this thread.

Always interesting to hear about usernames....

My first decent teacher Tom Tsaggaris always referred to the violin as a fiddle. I liked it and adopted it for myself. Not super common among Classical players but suited me well. I couldn't think of a better name for a website than one with Fiddler in it.

This was a kick to relive and to read new replies.