You know you are old when ...
What made you realize you were actually aging with everyone else?

For years I would say this brother is getting old, this sister is getting old (I am one if the youngest of a large family), wow, she has aged, my nepephew is growing up.

In my mind, however, I never thought of myself as aging with them, everyone else was aging, but, I was still the same.

There was one thing that happened that really made me think, “Da#$!, I am getting old, TOO!”

When we still used over-the-air FM radio, we used to listen to an oldies station that played late 50’s and 60’s. It was mostly 60’s. For a time we had a vehicle with a beautiful 5 disc cd player, stopped listening to the radio. Gave that vehicle to my son (we keep them for a long long time and are not worth much in a trade). New vehicle did not have the 5 disc cd player. Back to the radio.

I started listening to my favorite and only oldies station. Wow! My music was too old to be on thag station. It was moved to their really old oldies sister AM statiom that played BIG BAND. Huh? Rock is mixed with big band? At that moment, I realized I was not immune to aging, but they could not take away that I did not feel like I was. Since we keep cars for a long time, It was pretty bad since I love music. Had to keep swapping CD’s in and out when my husband was driving and pick one and listen to it over and over until I got to where I was going when I was driving (I did not need a law to tell me not to multitax when driving). I started mixing my own from my cd’s and squeezed as many songs onto a disc as would fit.

Next car we got had satellite radio. We now listen to satellite 60’s. Ah, sweet days of youth!

When did it hit you and what did it?

I was watching a kids' TV show a few years ago and they brought out a 45 record and said "this is what your grandparents used to listen to music on."

We occasionally perform uke gigs at sheltered accommodation and we perform numbers from the 30s (jazz standards and western swing) to the 80s. The audience told us we were great, whereas "the previous lot did nothing but Vera Lynn numbers, and we were all born after the war" indeed, making them younger than most of the Rolling Stones, and in fact 3/4 of ABBA are in their seventies now.

I was eavesdropping a guy in Starbucks a few months back - he was complaining that he turned on the radio and it was pensioners' hour, and they were playing stuff that would  be too bland for an elevator, whereas he was a pensioner and was listening to Black Sabbath in 1970 which was nearly 50 years ago.

Incidentally, the 30th January was the 50th anniversary of the Beatles' farewell gig on the rooftop of their Apple office in Savile Row. On that day I had a lesson with my teacher, Sheila, who plays viola for the Bootleg Beatles, and they had had a 30th anniversary rooftop gig there, but were unable to repeat it.

I suppose it was either when I started receiving AARP (may not be an international organization..sorry) mail or when new hires at work were my kids age.

I remember being in my 40s and looking at the birth dates of players on a college basketball team.  They were all born after the date that I graduated college.

I now have “Irish Alzheimer’s”—I only remember the grudges.

Or if you're a man, the first time you sit on a testicle.

It is not as hilarious as the movies make it out to be!

GregW said
I suppose it was either when I started receiving AARP (may not be an international organization..sorry) mail or when new hires at work were my kids age.

I started receiving AARP mail when I was 22, about 8 months after receiving my bachelor's degree. It was unsettling.

When you are running around the house looking for your glasses, and you're wearing them!

MoonShadows said
When you are running around the house looking for your glasses, and you're wearing them!

@ABitRusty I started receiving AARP when I turned 30. I brushed it off as senility from AARP’s end!

I vaguely remember going to the grocery store and requesting a 5% senior discount when I was 30 years old.  Practice continues. 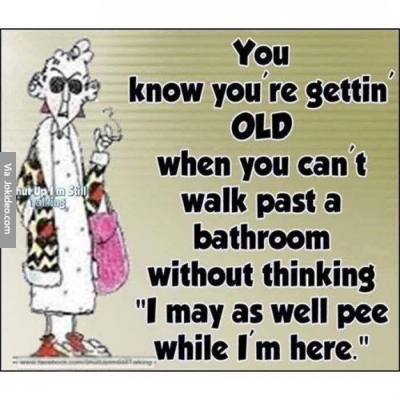 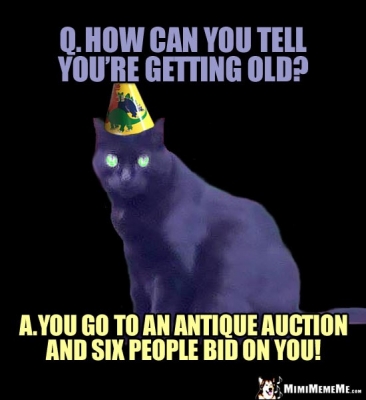 @MoonShadows I will have to stay away from auctions.

However, there is so much we can do to make old age as good or better than our previous life.
New hobbies, new healthier habits, friends, life choices.
I for one, at 55, am as healthy or healthier than I ever was.

I keep questioning my memory but when I really think about it I never had a great memory for names and such, but my memory for music has always been great.

I agree Fiddlerman! I don't mind getting older because life just keeps getting better!

Something that happened to me a while back, but it's indirectly related to my age because probably more directly related to the evolution of the human race* - I was in the foyer of the maths department at UCL and it was freshers week and I was surrounded by a crowd of about 80 kids (18-year-olds), which I took to be maths freshers. Every single one of them, male and female was taller than me! I'm 5'5". It used to be the case that women were often shorter than me, but nowadays it only seems to be the ones who are my age!

*Or postwar increasing prosperity in the West - not really the place for a sociological debate.

I knew I was getting old when I got a record player/turntable that only played 33-1/3 and 45 RPM records. Could no longer play my 78's!

How long ago was that Bob. LOL
I feel it's unbelievable that CD's are phasing out.

Seems such a relative and sliding metric that it would be hard to put a finger on when someone may think they're suddenly "old". For me, perhaps back when the music I grew up with started being played on the oldies station. It was a number of years ago, but I remember it was a song from Fleetwood Mac's "Rumors" album and it was a little startling. Since then there've been more and more things such as a 'young' woman (late 20s perhaps) whom I work with that's not quite sure if she knows who Robert Redford is.

I heard a saying a while back to "not begrudge growing old as a lot of people never get the chance." I'll be 60 next month and have already lived longer than my mother and (older) sister did. While my recovery time from strenuous physical activity is longer than it used to be and my knees talk to me more that I'd like, I don't feel particularly 'old'. A healthy diet and regular at the gym probably helps. I'm with you on that, Pierre!

A few years ago we did a family trip to the Grand Canyon. After a few hours of hiking around we were at a complex where there were shuttle buses back to the parking lot. We lined up to board the bus when I jumped out of line. I didn't come all that way to ride a bus; I'm hiking the few miles back, pending storms or not. My wife (7 yrs my junior) joined me, but our three kids (22, 25, and 30) hopped on the bus. Although they didn't admit it, I think they were concerned with being able to keep up with the old folks. Ha!

Personally, I plan on living forever and so far so good.

I used to love listening to the oldies from the late 50's, 60, and 70's. I still listen to them, but I have to stream them since the local oldies station now considers songs from the 80's and 90's as oldies.

I love growing older because life just keeps getting better, in spite of the aches, pains and limitations. I would never go back