I keep a record of every piece I've ever played in orchestras, and looking back through that list turns up some critters (YouTube links are not my performances):

Edward Elgar, Enigma Variations -- It's only a small portion of the piece, but the eleventh variation "G.R.S.", beginning at 22:02 of the video, recalls a friend's dog falling into a river, paddling furiously to find a landing place, and barking upon emerging from the water.

Edward Elgar, Wand of Youth Suite No. 2 -- The third, fifth, and sixth movements are respectively titled "Moths and Butterflies", "The Tame Bear", and "The Wild Bears". A comment on the YouTube link has timestamps for each movement.

George Frideric Handel, Organ Concerto No. 13 in F major "The Cuckoo and the Nightingale"

Jean Sibelius, Symphony No. 5 -- The third and final movement of this symphony, beginning at 23:50 of the video, was inspired by the sight of a flock of swans taking flight.

Richard Strauss, Don Quixote -- The second variation, "The victorious struggle against the army of the great emperor Alifanfaron" (12:02 of the video), is a musical portrait of Quixote charging into a flock of sheep.

Ralph Vaughan Williams, Overture to "The Wasps" -- This video is a recent virtual orchestra performance that a friend of mine appears in, because why not?

Qing Yang, Alice -- A modern (2018) piece for soprano and orchestra based on whale song, inspired by Alice, the "loneliest whale."

You are definitely going to keep me busy for a while as I check out all those Critter parts! 😉

Is there any new Critter piece, you might want to learn?

With many of us here attached to our Cats, where are the Cat pieces?

...you knew this was inevitable. 🤣

I've posted the amazing "Catcerto" elsewhere, performed by the Belgrade Philharmonic Orchestra.  Just in case you missed it...

If you're into Surrealism, I found a treasure trove of music inspired by Cats.  Take a virtual trip on some of this music!

Feline Groovy: Cats in Classical Music - 10 of The Best

I went looking for cat-themed pieces, but couldn't find any that really featured string instruments.

That said, as a pianist by training, I feel like I need to mention Scarlatti's "Cat Fugue." Supposedly the first six notes of the fugue subject were taken from Scarlatti's cat Pulcinella walking across the keyboard.

Speaking of piano music and pets, Chopin's Minute Waltz was originally titled "Waltz of the Little Dog" and was inspired by the antics of George Sand's dog Marquis.

Also, I suppose Borodin's opera Prince Igor has a tangential relation to cats. Borodin had multiple cats for most of his life. After his sudden death, Rimsky-Korsakov and Glazunov completed Prince Igor, which Borodin had been working on at the time. Rimsky-Korsakov later wrote about the heroic but futile efforts of Borodin's widow to keep six cats from bothering him and Glazunov as they sorted through Borodin's sketches.

Probably should learn how to think like a Cat better before I could memorize it, though. (lol)

Hope others will take up the mantle to maybe find some good Canine Critter pieces for us to learn - I'm about Crittered out. 😵

...still working on going over all the great suggestions in your list! 😊

Just in case anyone is curious how I find some music, here's a peek into how my weird brain works:

This is a FUN piece!

I MUST LEARN THIS PIECE! 🥰

On to chamber music. Two pieces that readily come to mind...

There's one more, Haydn's "Fifths" Quartet -- one of its lesser-known nicknames is "The Donkey" for a motif in its last movement that resembles a braying donkey.

All three of the above are staples of the amateur chamber music repertoire.

Also, getting back out of chamber music and into music featuring solo strings, there's a Telemann violin concerto known as "The Frogs."

Love the Lark.  Besides inspiring great music, some unusual tidbits about Larks: been consumed as 'people' food (vs. Cat food), inspired Shakespeare, used as a Religious symbol by Renaissance Painters, trained to sing 13 songs - as pets in China!  (Wikipedia)

Love the Trout.  Fun to visualize all the movement of a real Trout, down to the fluttering fins, in this piece.

Telemann's "The Frogs" was interesting, too.

Thank you for all the Classical String Critter music!

I did find a lively piece by Josef Strauss!

ziehrereien478 was kind enough to share the sheet music in the video. 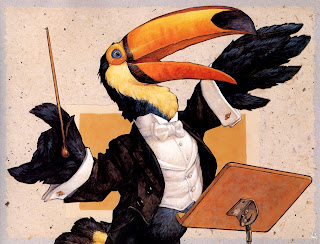 There will never be enough Critters! (lol)

...'Horned' Larks have been spotted in Michigan, but I've never seen one - pretty piece for a Quartet. 😊

Don't know how I missed this about Critters in Classical Music!

Guess I haven't been keeping up with TwoSetViolin, lately. 😳

Here's a few from the video, I think have not been mentioned in this thread, yet:

The Ox On The Roof, by Milhaud!

"Kangaroos", "The Elephant", "Lions Royal March" from Saint-Saëns, "The Carnival of Animals"! 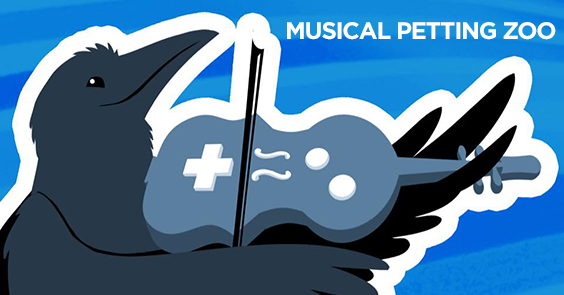 ...never expected this much!

A CRITTER Concerto for 5-string VIOLA!

Oh, I forgot about the Milhaud piece! It's a favorite of mine. There was later a famous Paris jazz club (which still exists as a restaurant) that was named after the piece.

The piece is actually a portrayal of Carnaval in Rio de Janeiro, and the title comes from a then-popular Brazilian song. Milhaud composed it shortly after returning to France from Brazil, where he had served as secretary to the French ambassador for two years.

Really love that piece!  Glad I already knew it was "The Ox on the Roof", made more sense than Google Translate's "Beef on the Roof". (lol)

The Critters are all out scouring for easy pickin's, cause it's Harvest time!

This Raven, composed by Garth Knox, is a Contemporary Classical piece - only for the most adventurous!  Performed by Netherlands Violinist, Diamanda La Berge Dramm.

Ok, I ventured.  Felt like I was watching a David Lynch film. I wonder what the sheet music for that looks like.  I don’t know how you annotate, “scratchy, breathy noise, okay, now the other scratchy noise” & “thump the bout”

I kept wondering when she was going to pick up the other bow.

I do appreciate the artistry.  However, as I’ve gotten older, I find I’m not much of a contemporary classical fan---in music or literature, where the objective seems to focus on the disturbing.  I guess I just like the stuff written by the dead people.

I was wondering why she didn't put any rosin on the bow.

I admire those who can dabble in disturbing creations, although I believe there's still a fine line that shouldn't be crossed - like gory realism.

I've always been envious of these Artists, like H.R. Giger, because I have toyed with the concept and found I just NEVER could allow myself to go there. 🙄

I'm probably the way I am today, from watching his films... and the Quay Brothers! (lol)

Ah ha!  I found a BAT - had completely forgotten about this one!

From a great, 3 Act Operetta!

Here's the whole Operetta to watch from the Australian Soprano, Dame Kiri Te Kanawa's YouTube site!  Some subtitles, but mostly in English - all parts of the 3 Acts are listed in the video comments.

The synopsis of each of the 3 Acts can be found here:

...maybe I should play the Die Fledermaus video while making these little clothespin Bats with the Grandkids!

Let me know if there's a better quality video somewhere for the Operetta. 😊

The White Peacock by American impressionist composer Charles Tomlinson Griffes, who was just starting to have his music played by major orchestras when he died at age 35 in the Spanish Flu pandemic.

Another of Takemitsu's better-known pieces, A Bird Came Down the Walk for viola and piano:

Jean Sibelius, The Swan of Tuonela -- Sibelius was inspired by swans more than once! There's an apocryphal story that claims that, the moment Sibelius died, one swan broke away from the flock ascending from the lake outside his window, circled his house once, and rejoined the others.

The White Peacock really sounded familiar - loved it!  Thinking it might have been used in an old Disney Nature film, or something.

After hearing Marina Thibeault play the Viola, it makes me wonder why Violins are even used in an Orchestra!

Recently head another piece that used real bird song, but can't remember off the top of my head.