Shove the Pig's Foot a bit Further in the Fire

Shove the Pig's Foot a bit Further in the Fire

When I play it it sounds smooth, too smooth!  I want to get effect the effect that Ken Kolodner is doing.  BUT What kind of bowing is he doing in part A?  Some kind of sawing?

I looked up the sheet music and made some suggestions. Also, a quick video. 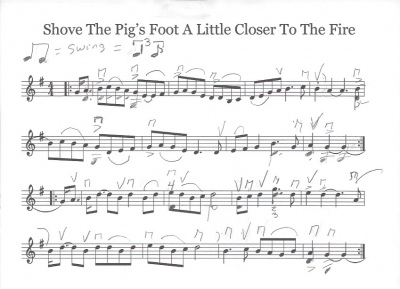 WOW!!  @Fiddlerman the coolest thing ever.  Thank you very much!!

You're welcome. Hope it helps.

@Schaick : I'm so glad you asked this question. I love that tune and I particularly like the Bruce Molsky video below, which sounds a lot like the recording you posted. Can't tell you how many times I've watched this video, not just because I like the tune but also because they all seem to be having such a good time. I wish I were sitting there playing along.

Thanks so much for that video response, Pierre! I'm going to watch that over and over again, too, as I really want to be able to play it.

One of the coolest things about bluegrass is making a song your own.  Are you allowed to do that with classical music?

Here is the version I learned originally fine for a beginner, but as I said in the opening too smooth!!   - http://www.drfiddle.com/show_t......php?id=12

@Schaick Where's your version of this?

Schaick, you can do anything you want but whether others will like it is another question. I am one of those that often make pieces my own. The above post is super enjoyable. What makes it special is all the harmony added to the melody.

Classically trained musicians are taught to imitate the style of the music in which they play but many of my favorite performances come from those who add a personal touch to the performance.

@fiddlinsteudel  That is the question!!  Where is my version?  Not sure how to explain this, the initial one I learned I liked the notes but not the feel, tempo, beat of it. Hence the posting of the question.

Same thing happened to me with Angeline the Baker.  I had memorized an easy version then heard a few different versions, Barry's, then yours, etc. I have searched listening to many videos.  I have not been able to decide which I like best.

Who knew such a simple song had so many versions!!  I want to stay close enough that people recognize the tune.  I have heard some that are a very far stretch.  I am mashing a couple together, then the question is - does it flow, make sense?

And as @fiddlerman mentions will others like it!!?  Hehe, no booing from the peanut gallery!!!

Who knew - thanks to Fiddlerman I have discovered that unknowingly I am playing "The Girl I left Behind "  with a slight bit of a swing.

Another blog idea - discussing the different versions of bluegrass tunes, who played them, part of country they are from etc.

So, would you consider "Pig's Foot" a bluegrass tune? It sounds more Irish to me. I suppose in bluegrass terms, it would be considered a "fiddle tune." (I think I just answered my own question.)

@KindaScrathy  Hehe!!  Yes it does.  Maybe today it is simply in the way it is played, with or without ornamentations?   Bonaparte's Retreat became classical music with Aaron Copeland's help.

Have you seen this site: http://www.ibiblio.org/fiddler.....RIN_PY.htm

PUSH THAT PIG'S FOOT A LITTLE FURTHER IN THE FIRE. Old‑Time, Breakdown. USA, Western North Carolina. Recorded by fiddler Marcus Martin (N.C.) for the Library of Congress. Martin was influence by E. Tenn. fiddler J. Dedrick Harris, who played regularly with Bob Taylor in the latter's bid for Governor of Tenn. in the late 1800's.

I thought it might depend on the actual title.  Who knew it had words??

SHOVE THAT PIG'S FOOT A LITTLE FARTHER IN THE FIRE. Old-Time, Breakdown. G Major. Standard tuning. AB (Silberberg): AABB (Phillips, Songer). A ‘pig’s foot’ is a blacksmith’s tool that somewhat resembles a crowbar or poker, used to manipulate pieces of pig iron in a forge. The tune was originally recorded by western North Carolina fiddler Martin Marcus on an LP where he played it as a duet with his son Wayne. Marcus also recorded for the Library of Congress in the 1940's. Joel Shimberg (who says “Surely it’s a barbecue song”) learned the following verse to the (low part of the) tune from Mike Seegar:

Shove that pig's foot into the fire,

Do it now, Miss Liza,

Shove that pig's foot into the fire,

Do it now, Miss Liza.

T:Shove that Pig’s Foot a Little Farther in the Fire

Here's the way I play it, I go through twice, one without any drones, second time with drones:

@fiddlinsteudel That is really really awesome!  Thank you for posting that video!

I am listening to all this Shoving the Pig foot... and now I have another tune to learn...

You gotta learn this if only to say you know a song with this name ...

BTW I posted this for Schaick in a different thread as I couldn't find this one ... but if you are practicing this and want some backup tracks I have a bunch here: