Some of you know I have been working on a 1/2 size violin from a kit for my daughter. Now the big day has arrived -- setting it up!

The first thing I did when I got home today was to put endpin on and to glue saddle on with wood glue but it didn’t stay on. I went on to fit the pegs. I got them fit, flashed the end of the pegs. The whole process took a long time, or longer than I expected (everything took longer than I expected). I decided to cut groves on the saddle for tailpiece gut. Then I made hide glue to glue the saddle on. While waiting for the glue to warm up, I clean off the neck – took the tape off and clean off varnish that I accidentally put on the fingerboard and sand the neck as well as the fingerboard. Then I put tong oil on the both of them.

Finally, I glue the saddle on and began to string the violin. I want it to sound good so I bought a set of Dominant strings from fiddlershop. The bridge seems to be okay, other than the two middle strings seemed to be too far apart. When I began to string the violin, all the windings on the strings except E string were too thick for the fine tuner prongs so I had to take them off and just hooked them on the tailpiece. The E string did not look good from the package but I put it on anyway. I put peg compound on but the pegs still didn’t go smoothly. I tuned it up and let my daughter played on it.

Sunny (third name my daughter named her) did not sound as loud as I wanted it to be, but it did sound richer, especially the G strings, and mellower than the Anton Breton that my violin teacher gave me last week for practicing violin building. The AB violin sounded harsh but very loud. It also sounded more pleasant under my ears than the AB violin. My husband and daughter both liked it. After my daughter was done trying it out, I played on it and kept tuning it. I thought the E string sounded kind of weak, so I took a look at the sound post, it was slanted, so I tried to set it right, and of course it fell over. It took me a couple trials to get it back on the right spot. Then I resumed playing and tuning. The E peg slipped and when I tried to turn and push the peg in, PAAK, went the E string. I pulled out an extra E string and put it on, then I realized it was for ¼ size violin. So I pulled out E string that came with the violin and put it on. It wouldn’t tune and as I worked on it the end ball fell off the loop. Good thing I had another set of strings, so I put it on.

Well, my daughter only has two days to break it in before we show our teacher to get her approval of the sound. We shall see how it goes!

congrats, that is alot of work! If your teacher approves you have created something special right there. I know you learned alot and your full sized kit will go much smoother as a result....

Thank you! It was fun making it! I owe CatMcCall a big one! Without her it would have been hard and frustrating for me to get it completed! She has provided me a lot of support, encouragement, and guidance! Thank you, CatMcCall!

Great mate. I look forward to seeing/hearing it in a post

That is something that 'I' should consider doing.

What kind of finish did you put on it?

@kevin: I used oil based varnish.

@ Coolpinkone: Yes, it was very exciting for the whole family, especially tonight because we had our lesson an hour ago and our teacher approved the sound! She was pretty impressed by its appearance and sound. Another adult student saw it and heard it as well, she was impressed as well! It has some little flaws mostly my mistakes, but I am really excited. Some of my colleagues saw it and heard my daughter played on it were impressed, too:P

I would love to see pictures

Seems like You did it great even at the first time (was it first or i missed something?)! Impressive!!

That sounds wonderful. I would also like to see pictures and maybe some audio. I myself always stick with the spirit based finishes. I am too impatient for oil.

Congratulations Pky, It's a lot of work but I bet it's really gratifying when it's all done and being played the first time.

Look forward to seeing and hearing it

@kevin: yes, it requires a lot of patience (I have ten coats on, how patient am I). While I was waiting, I also work on a box violin and repairing a violin, although I have kind of stopped that, need to pick it up again.

I think I am quite patient, but most of all, I am very stubborn and am a perfectionist:)

@Fiddlerman, I enjoyed the whole process a lot! Knowing I could do something other than my current profession is assuring. Other people's belief in me help and support me a lot! The greatest joy came when our teacher approved the sound!

I will post photos (I did sort of keep a log of the whole process) and sound sample (the strings are still breaking in) hopefully I will have time this weekend so you could all see it and hear it. By the way, my daughter finally settled with the name Sunny (from Daisy to Sun Shine and finally to Sunny, guess how it gets its name?)

Stubborn is worth it's weight in gold, I think. LOL

Yes, stubbornness is gold in some situation, a better word for it is persistence. It is the key "ingredient" to get a project done:)

Have fun with yours! 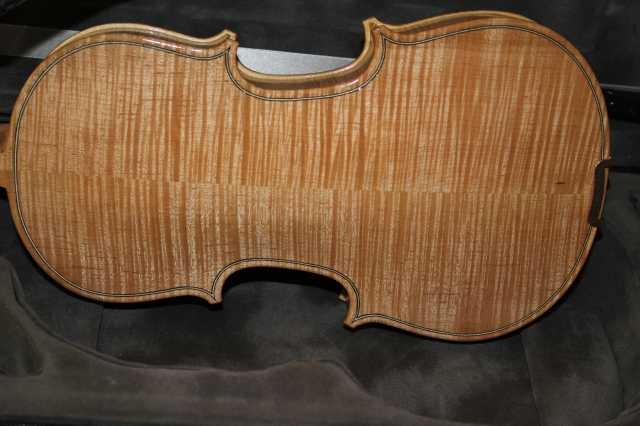 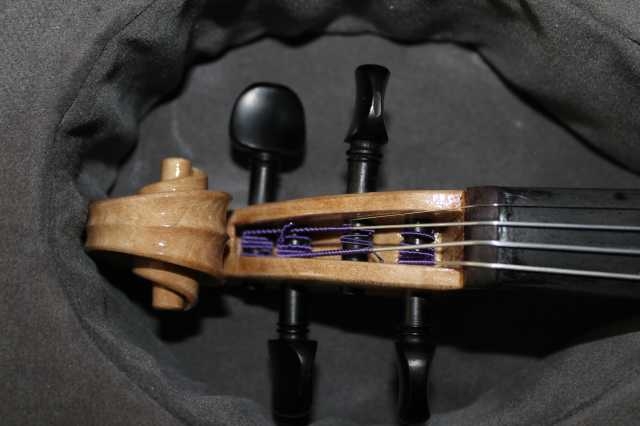 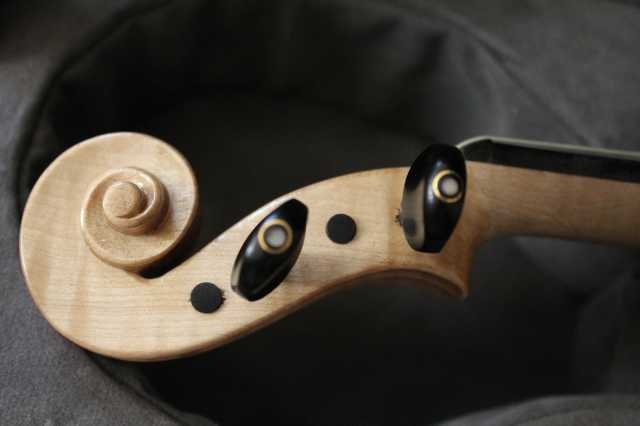 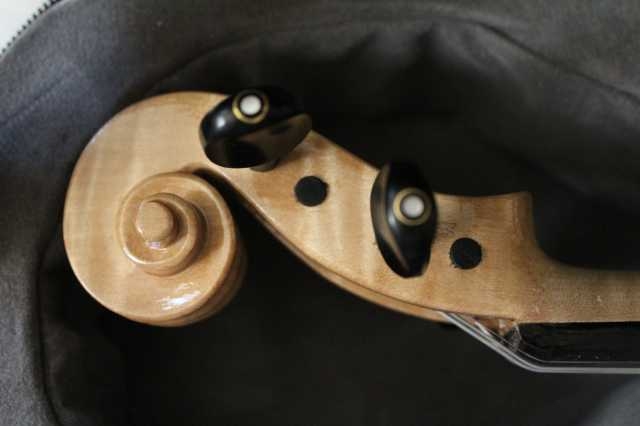 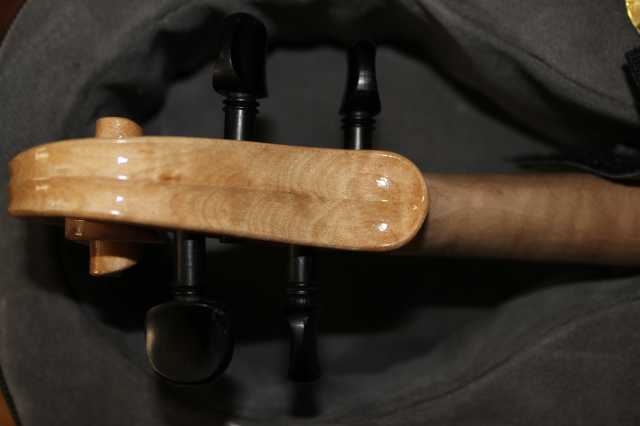 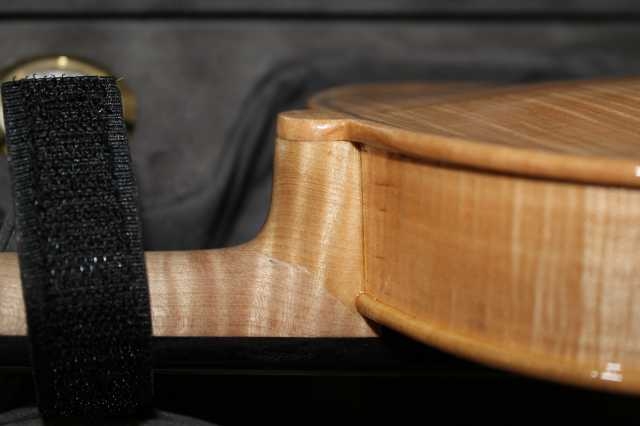 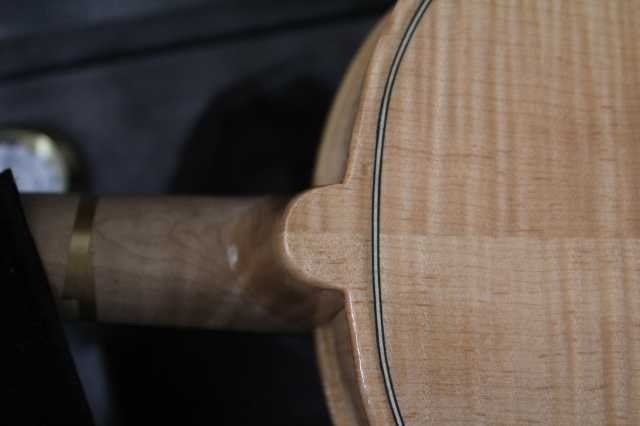 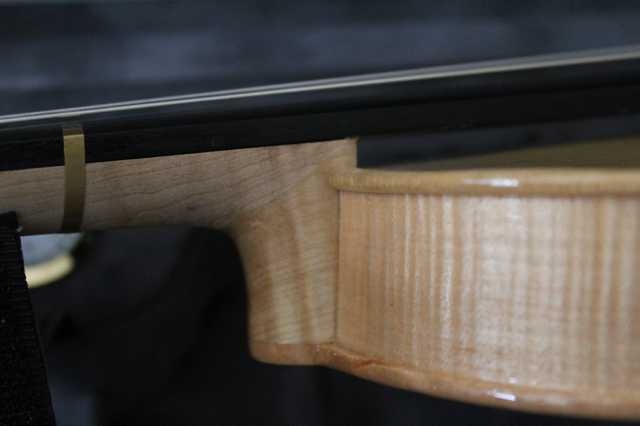 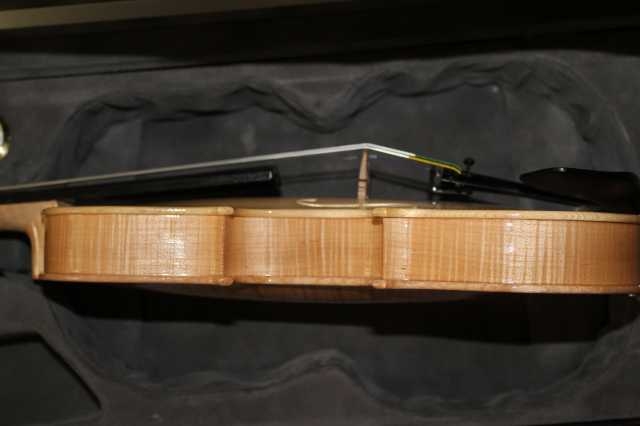 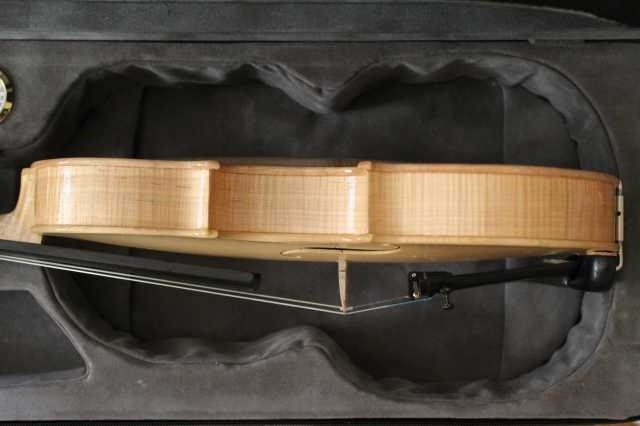 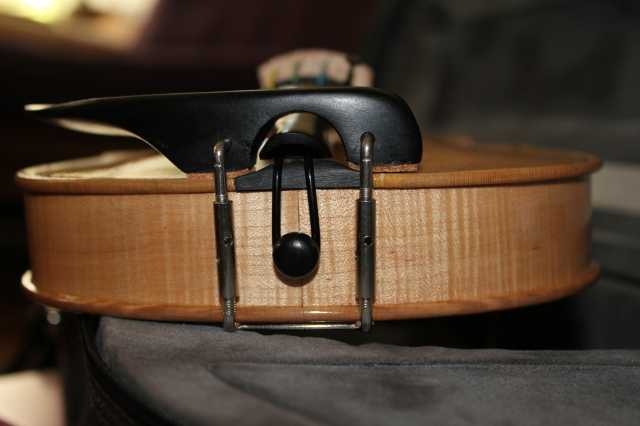 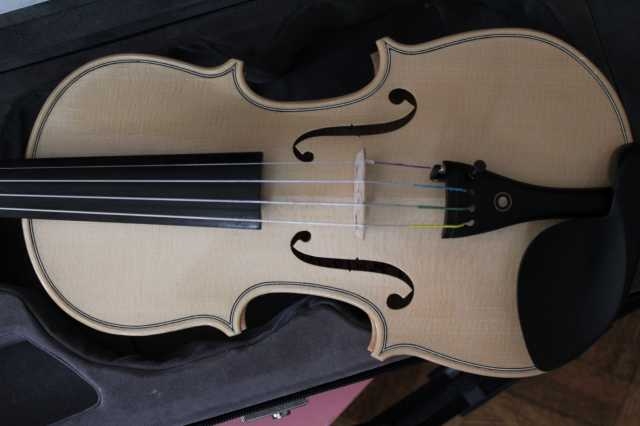 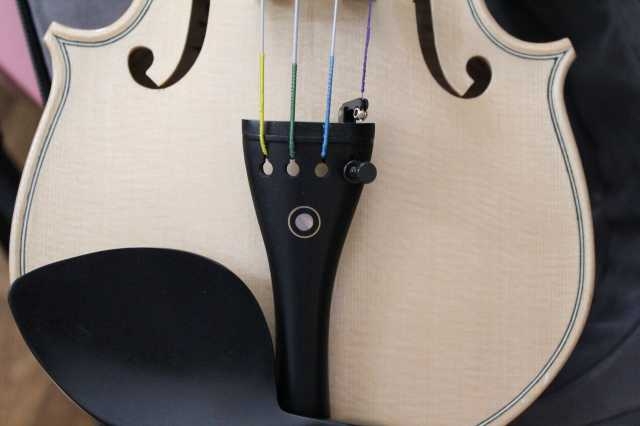 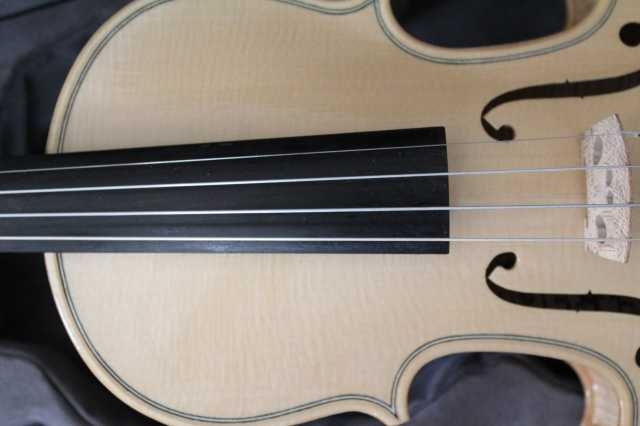 That's a mighty nice looking fiddle, and you even built it yourself, wow! Congrats! I'm green with envy.

Well, I finally managed to upload the photographs! Phew! The color of the violin kind of change according to the light source. The back is gorgeous in my opinion and it's more brown because of the flame than the front that is a little yellowish. It is not of no flaws, if you look closely, there's a cut at the heel, a cut on one of the pegs, peg holes are not smooth (they came like that), varnish is not as smooth as I wanted it be, nut groves and bridge probably are not cut right ... But it's playable and my daughter's teacher approved the sound!!

@Steve: Thank you! I didn't build it, I assembled it, varnished it, and set it up. It's a lot less work than building it from scratch.

Beautiful, Kim! That back is especially pretty. You did a wonderful job and I hope your daughter has a good time playing. Maybe you can record her at recital (hint, hint)

You did a beautiful job. The flame on the back is really nice and you did an excellent jod on the purfling.

Thank you, but I did not inlay the purflings. The communication between the dealer and me were not clear enough so they ended up giving me a kit more or less like DanielB's, except that I had to glue the top and neck on, varnish it, set the sound post, nut, fit the saddle and bridge, ream the peg holes and end pin hole, shave the pegs a little, and set it up. I was disappointed when I got it because I want to be able to do more, but now I am glad because I would not have get it done in time for my daughter. I am trying to order a 3/4 size kit with more need to be done, like bass bar (I have done one, but don't mind more practice), purfling inlay, graduating the plates, cutting mortise, etc. Hopefully I will get what I order:)