A while back I posted a thought that a bungee cord with a plastic end ball (sold by Harbor Freight and others to secure garden hoses and other loose objects) might be used to secure a sound post on a violin while changing strings.  I thought that all of the resulting structural distortion would occur in the front and back plates, and bocaholly thought that the ribs would take up the deflection.  I had the necessary measuring instruments, so a simple experiment was made to determine what would happen.

The test violin was a 1/2 sized German made violin without a sound post.  A piece of painter’s tape was placed across the top of the violin just under the circles on the upper portion of the f holes in the center bout area of the violin.  The middle of the top plate was marked on the tape.  The following measurements were made.

A simple loop knot using both strands in the bungee cord was made to secure the ball to the cord so that the unstretched length was the width of the c bout.  The cord was stretched around the violin at the c bout and the violin body distortion was measured.

The stretched bungee cord decreased the distance between the top and bottom plates of the violin, so it should be capable of securing a sound post while changing strings.  The deflection of the front plates was compensated by a corresponding expansion of the ribs.

While I was at it, I expanded the loop and secured it in the depression under the points on the lower bout (reasoning that this was a little closer to the sound post).  No noticeable deflection was obtained.  This is obviously a much more rigid area on the violin.  It also is a region of solid material on the front plate, since the f holes do not extend this far down.

A picture of the bungee cord retainer follows.  Various sizes of violin can be accommodated by the use of a longer length of bungee and knot as appropriate. 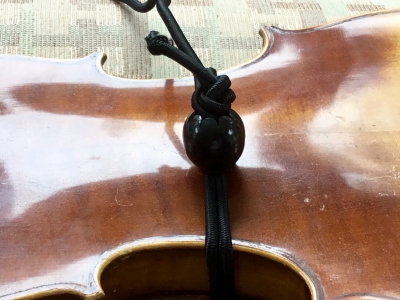 I'm pretty mystified by soundposts. I assume from what I've read that they are loose and just held in place by friction from the compression. Why aren't they glued in place?

A+ on knot proficiency. You're now ready to sail away with these folks...

Hi Andrew Fryer and others.  I have seen a few string basses with a retaining cup positioned around the sound post on the plates for ease of positioning, but nothing like that for a violin.  A small shift in position and length of the post can make a huge change in the sound, something that I have not yet tried.  Tradition is also big in violin making.

It is normally not a problem to change all the strings at the same time without having the soundpost falling. However, it's recommended to change one string at a time to retain enough tension on the top of the instrument.

I can take off all the stings and squeeze the sides of the instrument and the soundpost will fall almost every time if I want it to.

Very interesting read, thank you for posting it.

Got it, @Irv . Cellos being so much more robust than violins, I'm not sure if I can conjure up the necessary bungee tension. Maybe I'll just go for the "one string at a time" version

@bocaholly .  The plates on a cello are thicker than a violin, but the distance between the side ribs is proportionally longer.  A bungee cord should still work for you.

1. Is the painters tape applied so the bungee cord makes no marks on the violin?

2. How do you know how tight to make the bungee cord?

@MoonShadows and others.  I had to re-read the thread to remember what I did.  The masking tape was used to mark center of middle bout for caliper readings.  Bungee cord can safely be used without leaving flaws to finish.  The range of elasticity of the cord is rather limited.  You want to leave enough stretch to allow the placement of a finger under the cord when set in place.