Diy on an old friend.

Diy on an old friend.

Well, I've long wanted to share this project, which is of course not complete (and it will never be, I think it will be something like a lifetime-constantly-trying-to-upgrade or whatever)

I started messing with this instrument, when my primary violin suffered a major crack, last spring. During the visit to my luthier I eventually decided to go for a new instrument, and everything was good at the end, but one thing kept me stressed : In case of any future repair, I did not have a serious back up ready to be played, or a secondary instrument to carry for less important playing, jamming and outdoor events.

So I decided to go diy with an old cheap violin of mine, which has its own little story.

It was bought in 1999 I guess, by the teacher I had back then. Despite being a cheap factory made violin, it had a good response and direct sound. In 2006, I started hanging around with a local guitar repairman and we decided to experiment a bit, strip off the original varnish (I know, it is not acceptable, but come on, I did not like it) and paint it black with softer lacquers. And everything improved

And I was happy back then. To be honest, this instrument was a loyal companion during my studies, a few grades before a diploma . Not bad for a cheap violin...

But now, after I have used better violins, there were many things that disturbed me in this instrument (such as its painted fingerboard). My luthier advised me against any improvement on this instrument, (since most tasks would exceed its value) and suggested that I keep it for my experiments, since he noticed that I enjoyed it.

1. Partial removal of the black coating, and exposed areas were treated by a soft non abrasive lacquer
2. Well. there was no purfling. Or it was, but painted. I don't expect every 100 usd instrument to have an inlaid purfling, but why bother paint one?
3. Removal of this material in the fingerboard. You know, this thing that turns your fingertips black and sticky if you play that much. It's even more annoying when you try to remove it with sandpaper, and try to avoid to change the scoop and radius of your fingerboard.

4. Underneath there was some kind of a lesser quality ebony, light brownish. It didn't look quite nice in contrast to dark violin, so I treated it with a home made remedy. A little of tea and coffee, rubbed in several coats. It really darkened, a lot
5. New soundpost (Got to thank Fiddlerman for his relative video, again)
6. New bridge. That was tricky, I carved many and while there was an improvement, I wasn't super happy. I did this again tonight, and I hope it sounds better. We'll find out next morning.
7. New tailpiece. Got to thank my luthier, who in the past advised me of keeping an afterlength no less than 1/6th of the original vibrating string length, especially in the A, D and G.
8. New chinrest. I was at a local multi store the other day, and saw 3 large sheets of 3mm cork on offer. Couldn't resist.

What's left: fitting the pegs better ( I have to borrow a peg reamer) and fix this end pin, which in one day decided to go loose. It's being held temporarily in place with the help of a little silk thread. But I don't think it's a good practice for a long time.

And now, some pics 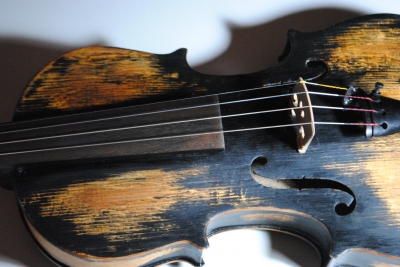 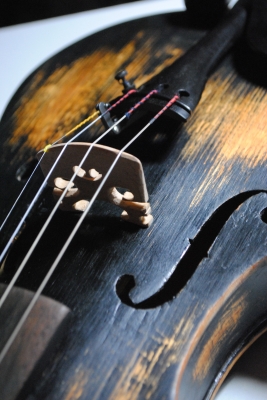 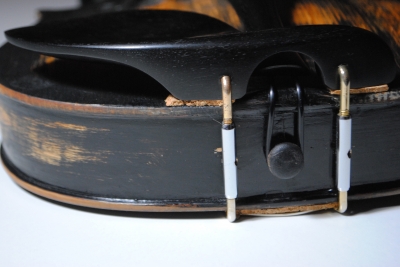 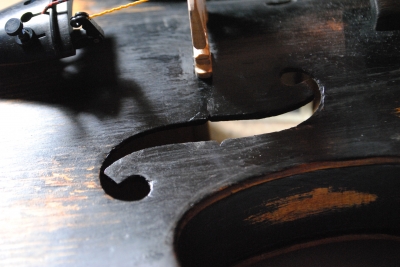 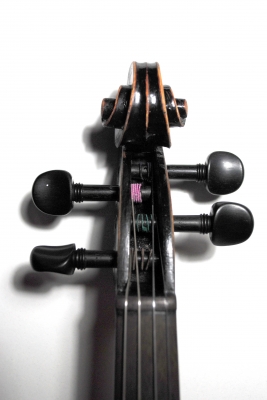 Glad to hear that with a little bit of diy, care, love and attention you've given new-life to your old friend !!!!

Nice work! I love how it looks

Thank you @BillyG and @damfino

the only problem is that once you step this way, you never stop, you always think of something that has to be modified. At least that's what crosses my mind.

And that's how I usually get lost.

Are you comfy with the sound?  I hope you enjoy this cool looking sassy violin.

coolpinkone said
It think it is pretty cool... I think the word some use is "badass"..... love it..

Are you comfy with the sound?  I hope you enjoy this cool looking sassy violin.

Yup, "badass" it is, especially if you think of most violins like some delicate items worthy of care, careful treatment etc, this particular one makes you feel safe whatever you do with it hehe

Having played this violin for so long in the past, I am comfortable with its sound. However, it's not that great or something really special to play on.

I would appreciate any info regarding the "how-to-pimp-up-the-g-string" issue. EAD are doing fine, or something close to fine. I've tried different soundpost placements and qualities, many g string types, still sounding empty compared to the other 3. Maybe something on the bridge? (If it's just the bassbar, then there is no hope, I quit

I like it!! That black varnish removed only in some places looks, like was mentioned earlier, totally badass!

Did you ever get that bridge to work? I'm thinking of doing something similar to a VSO I have, just because I've already got my other better violin and I love to tinker.

I really like the "patina" it has. Then again I like the look of worn old violins compared to shiny new ones. That one is a bit towards the hollywood side, but it works. It looks great. Has a really presence of its own now. I can imagine it stands out a bit.

Hey everybody, I am really sorry I did not reply to your comments, seems as if I lost track of the thread

@ladyeclectic That particular bridge worked, in terms of angle, string height, clearance etc. Got some trouble though with making the feet even with the belly of the violin. I have carved a few more since then, with better results. Marking the position of the bridge and laying a sandpaper (stabilising it with masking tape could be alright with inexpensive instruments) roughly where the bridge should be, did the trick this time. However it was a little painful to make sure all the time that the back of the bridge was perfectly perpendicular to the violin while I was moving it back and forth. Also, I started to use this special parchment cover for the e string notch, and the bridges got better and better. Still not perfect though...

@DrHax Hollywood? I suppose yes, but it should have survived an end-of-the-world movie. But it still gets some horrified stares, like "what happened to this poor violin?". I have continued to tinker with this one, and I have darkened it a bit. I should post some extra pics asap